Possibilities of Error in My Life

I had just walked back into my late grandmother’s building after returning the key to her apartment to the landlord several blocks away when the rain started falling. My mother had asked me to clean out the apartment since it was only a bus ride away from campus. The bus stop was a mile away from the complex, so I decided to sit at her front door and wait the rain out. That was when a girl ran in from the storm drenched head to toe.

Don't use plagiarized sources. Get your custom essay on
“ Possibilities of Error in My Life ”
Get custom paper
NEW! smart matching with writer

She fumbled for her keys as she commented on how the lobby tends to flood during rainstorms and insisted I come in if I was planning on waiting it out.

Eventually, I untied my sneakers and placed them neatly next to hers. The room smelled of cedar oak and vanilla. It reminded me of the overly sweet cookies my mother used to make when my sister and I were kids. I carefully seated myself on the edge of a burgundy nylon sofa that took up the majority of the small apartment living room.

The remainder of the space was occupied by half-filled cardboard boxes, clutters of oil paintings, and objects that can only be categorized as things you’d see in a HomeGoods and couldn’t help but wonder what peculiar type of person would make such a purchase. Of all the peculiarities in the room, the most distinctive was a framed oil painting hanging on the wooden wall opposite from where I was seated.

It was painted with every color of the rainbow and although I didn’t quite know what it was supposed to be–maybe a sunset or a face or a dove–I couldn’t seem to stop staring at it.

I jerked my head to face the direction of the voice. She was leaning against the corner that led to her bedroom. She had changed into an old Northeastern T-shirt and cotton shorts. The darkness of her shirt contradicted the lightness of her damp brown hair that was formerly dripping in rainwater when she had first invited me in. She laughed lightheartedly. “Didn’t mean to startle you, I just saw you staring so intensely and wanted to know what you were thinking.” Her dark brown eyes indicated that she cared more about my opinion than what her tone was conveying.

I thought of my sister and the countless nights she had spent without sleep constantly having to restart her oil painting assignments for class. “You did your first piece with oil paints?” I asked.

She nodded, “Yeah, I wasn’t sure what type of paint to use so I did some research and fell in love with the technique. I admire how unforgiving it is. If you mess up, you’re forced to make it work, and once you do, it can turn out even better than what you imagined in the first place.” She paused, “I needed to be reminded of that.”

She looked back at the painting with an expression I couldn’t understand, then smiled as if remembering something bittersweet. “I had broken up with my boyfriend around the time I started painting it. We met during our junior year in college and dated three years before it really hit me that we were just too… different.” She turned to me to study my reaction and continued slowly, “I was 23 when I made the realization, over a year since I graduated with a degree in a field I had no passion to pursue. He studied mathematics and computer science and loved every bit of it.

He would tell me that once we graduated, we could move to any state in America I wanted since he knew my dream was to travel. He said it didn’t matter if I didn’t know what I wanted to do with my life because he could provide for our future together regardless of whether I had a job or not. I appreciated it, I really did. And I knew he loved me, he would remind me every single day, and for awhile I thought maybe I could learn to love the life he wanted for us, learn to settle down in the suburbs and appreciate the mundanity of routine. I thought as long as I loved him and he loved me, we could make it work.

“The last year of our relationship was one of the worst years of my life. We fought about every little thing and it wasn’t until I started that painting that I realized I didn’t really know who I was anymore. For three years I tried so hard to force my desires to fit the mold he envisioned for us and in the process, I lost myself.” She tucked a loose strand of blonde hair behind her ear. “I had been living a life of comfort at the cost of pursuing my dreams, and the feeling of incompleteness that I had tried so hard to suppress was catching up to me.

One of the hardest things I’ve had to do in my life was to explain to him what I was feeling. He took it really badly. I can still hear the shaking of his voice as he told me to leave and never come back. I came home that night and worked on that painting. I was crying and my hands were shaking so hard so I messed up a stroke and the fish wasn’t a fish anymore.” She closed her eyes before starting again, “To him, everything had an answer and I was giving him the wrong one. He saw the world in black and white, there was no gray area in his world, no wonder he enjoyed math.” She laughed softly and opened her eyes, “I mean, how do you tell someone like that that you don’t think any amount of love in the world can fix the emptiness you feel?” She stared at me with wide eyes, expecting an answer.

She slouched back into her chair, “That’s what I thought for awhile. The first few months were the hardest. I thought I had made a horrible decision. I didn’t know who I was and now I had lost someone I thought I would marry. I wanted so desperately to run back to him and apologize, ask to start over. But I had hurt him too much already and that wouldn’t have been fair to him. So, I forced myself to focus on something else, anything else, that would numb the pain of trying to forget someone you love, and for me, that was that painting.

I had thought about throwing it out after I had messed up, but for some reason I didn’t, and I didn’t have enough money to buy another canvas so I just added on to it. I’m really proud of how it turned out. I looked at it everyday for months as it was drying and it made me wonder if I had actually messed up that night since without that stroke, it wouldn’t have been able to be what it is now. It’s been two years since we broke up, but there are still times I miss him so much my chest hurts. I don’t know where he is now, probably working for a successful company, but wherever he is, he’s probably much happier. In a way, I think was holding him back too.”

Possibilities of Error in My Life. (2021, Dec 09). Retrieved from https://studymoose.com/possibilities-of-error-in-my-life-essay 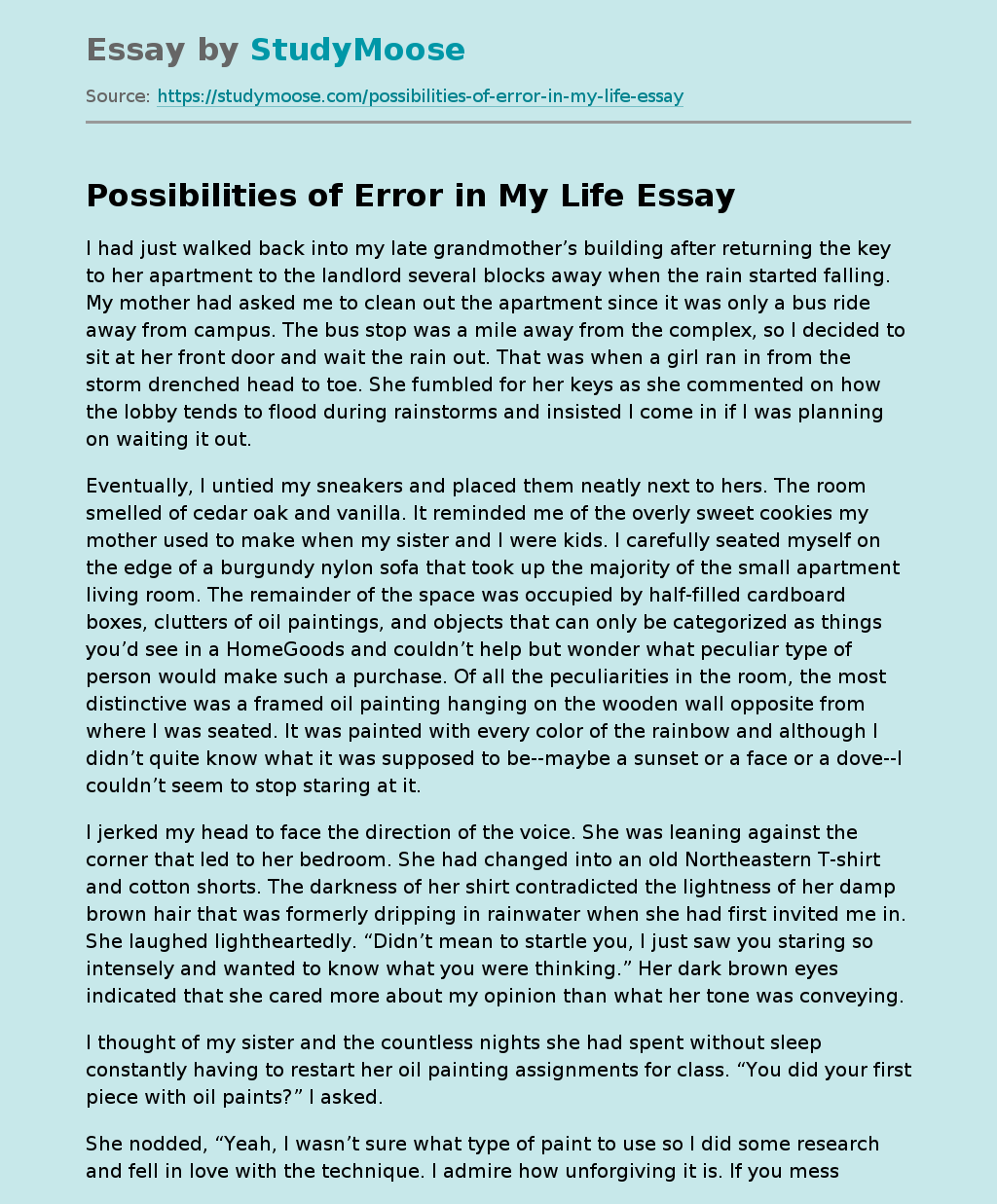