Eating Home and Eating Out

Thanks to eating at home families are able to save more money in the recession. Eating out on the weekends and during the week makes families spend much more money than they expect. But mostly some fast food restaurants have specials going on during the weekday. But many families are starting to cook at home because of the cost of food at restaurants. The money that they are spending at fast food restaurants they can be saves at the grocery store.

Don't use plagiarized sources. Get your custom essay on
“ Eating Home and Eating Out ”
Get custom paper
NEW! smart matching with writer

Eating at home is much cheaper and healthier than eating out at restaurants. When families are eating at home it puts the cooker in control.

So they are able to know what kind of ingredients to put in their food. Instead of families going to a restaurant and trying to figure out what they put in their food just in case they get sick. If the families are eating at a restaurant like McDonald’s they do not know if their hamburger have hit the floor before preparing.

Proficient in: Eating out

But they are probably praying that it has not. Have families ever glanced at what a hamburger at a fast food restaurant is made with? There can be tons of ingredients, some with names that people never heard of or cannot pronounce (Steendahl).

Chefs and health inspectors agree that a clean bathroom is usually an indicator of the rest of the restaurant and when visiting a restaurant for the first time it is the first place you should visit (Lempert).

Conversely, overflowing trash, stopped up drains, lack of hot water or soap in washrooms indicate that the restaurant is not paying attention to fundamental cleanliness practices. They look at the waiters and the way they welcome their families to the restaurant. The waiters are there hygiene nice and neat. Always remember that they are handling the food you are about to eat. When families are at home they do not have to worry about who prepared their meal and were their hands clean when they cooked it. When families are at home they automatically clean their kitchen once the family is done.

Families now days are starting to eat healthier. Some families have become overweight because of eating problems and not eating enough healthy foods. Restaurants have some healthy foods but not a lot because when families go to restaurants they intend to get what they want. For instance, if someone was on a diet and they go to a restaurant they are not going to look in see how many calories are in the meal. They would just eat the meal because it was either good to them or their favorite meal.

But if that person was at home they would try to make that dish as healthy as they could for their family. More than 70 percent of consumers believe the food they eat at home is healthier than meals consumed out, according to a national telephone survey of more than 1,000 U. S. shoppers conducted for the Food Marketing Institute (FMI) and Prevention magazine (DeJohn). Some restaurants have healthy foods McDonald’s has their Caesar, Southwest, and Ranch salads that come with grilled or crispy chicken. They also have the fruit and walnut salads, parfaits, and apple dippers that are healthy.

But some people do not look at the healthy side of the restaurant. They look at the negative. Restaurants can be particularly challenging to anyone who wants to eat a healthy diet (Kathi). Restaurant food is rich, fatty, salty, and often high in carbohydrates (Kathi). Also, restaurant portions tend to be much bigger than you would serve yourself at home. Families in the world today think about how to save more money than spending more money. Once families think about how much they spend eating out they could have made the same meal at home for much cheaper.

When your mother have gone to McDonald’s and bought four Double Cheeseburger meals for $3. 18 a piece she has paid almost thirteen dollars for the family that day. She could have gone to the grocery store and bought some hamburger meat, French fries, and sodas for fewer than fifteen dollars. When you eat at a restaurant families like to be comfortable and feel welcome to be there. At some restaurants families do not feel comfortable being at. For example, when a school has a basketball game and everyone goes to McDonald’s afterwards.

No customer would want to come in there after some school children have came in the place. The restaurant would be a mess. But if the family was eating at home after the games they could be more comfortable because they would not have to worry about being in line and seeing the place a mess. Also, when families go to a nice restaurant they have to put on their best clothes in order to go eat and come back home. When you eat at home your children can eat with their pajamas on and be comfortable. Some families have birthdays at fast- food restaurants especially McDonald’s, Chuck-E-Cheese, and the bowling alley.

When your children receive birthday party invitations those are the types of restaurants people are having their child parties. So by the time that parent buys all those children Happy Meals or pizza they have spent almost sixty dollars plus cake and ice cream. If that parent would have just cooked at home they would have saved a lot more money than going to different types of restaurants to eat. There are a lot of benefits and thoughts that run through family head in order to save money.

Families think about if they save this money by eating at home they could maybe go on vacation. Families have to think about a lot of stuff in order to eat at that particular restaurant or at home. If my family eats here tonight will they be eating healthy and will any of my family break out because of any ingredients they put into the food. Some people wonder if they eat out will they have enough gas money to make it to work tomorrow. But it would depend what grocery store your mother shops in because every grocery store be either lower or higher than the other stores.

So eating at home is much cheaper than going out to a restaurant just remember to think about the good things that families could do if they would just stop eating out. Work Cited DeJOhn, Christopher, “Eating Healthier at Home. ” Food. Business, 26 January 2007. Web 1 March 2010. Kathi. “Healthier Eating at Parties, Restaurants, and During the Holidays. ”

Eating Home and Eating Out. (2017, Mar 27). Retrieved from https://studymoose.com/eating-home-and-eating-out-essay 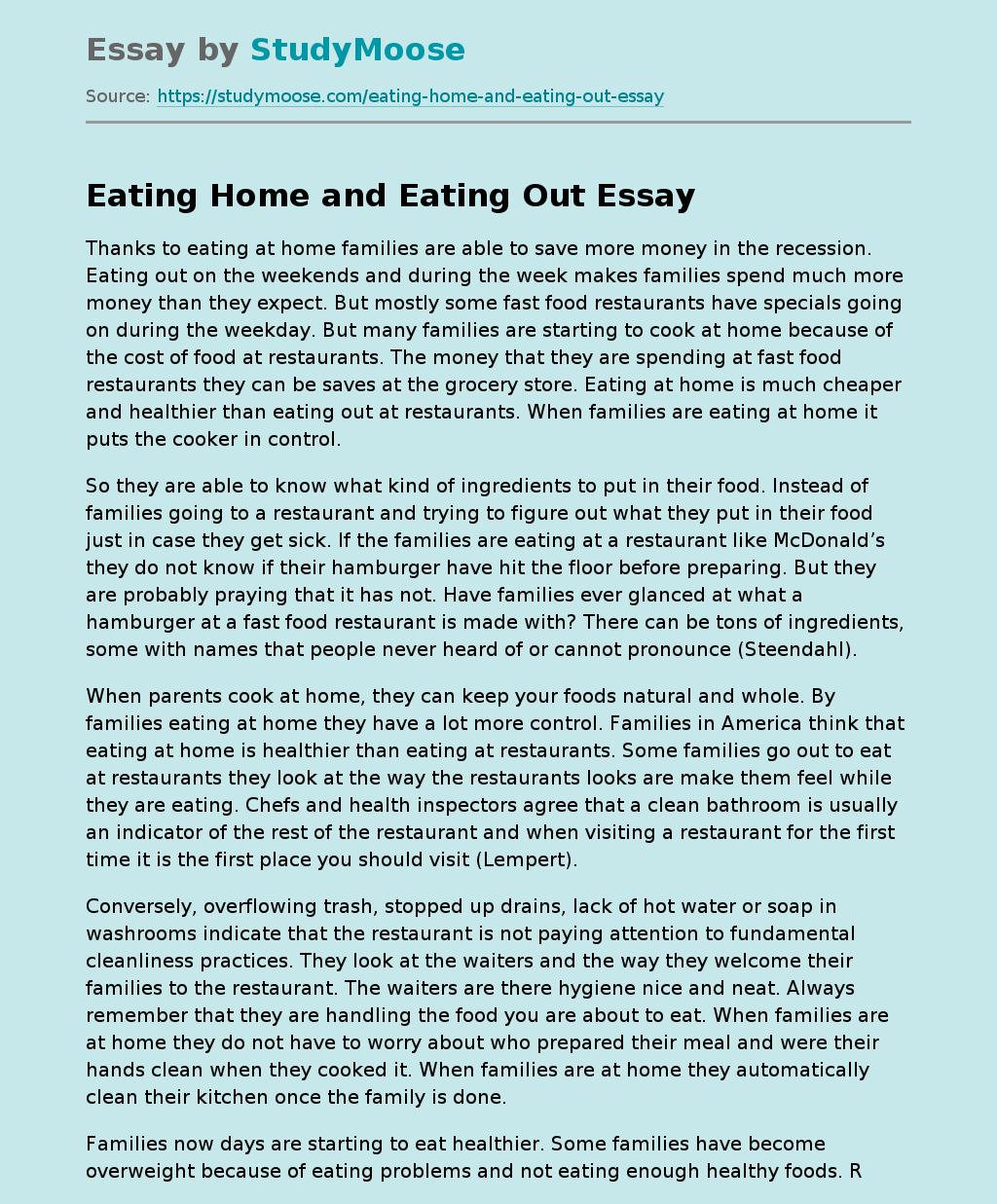