Poem Analysis on Out, Out- by Robert Frost

My emotions toward this poem are depressed, forlorn, and melancholy. In “’Out, Out-,’”, a young boy is at work about to go to dinner when suddenly the saw cuts off his hand. A boy his age shouldn’t have to die doing a man’s job. Work back then had unimaginable conditions that made you want to cry. The line that struck out at me the most was “Don’t let him cut my hand off- The, When he comes. Don’t let him sister!” So.

Don't use plagiarized sources. Get your custom essay on
“ Poem Analysis on Out, Out- by Robert Frost ”
Get custom paper
NEW! smart matching with writer

But the hand was already gone. This made my whole body convulse at the thought of his hand being cut off and eventually causing his death.

When breaking down the poem, I realized he used repetition of the words “snarled and rattled”. For me it created an ominous and almost foreshadowing affect. The working condition was not up to par, and Frost shows this by the line “And they, since they were not the one dead, turned to their affairs.

” This shows how people acted towards children working and that anything can happen. It also produced a personification because a saw doesn’t answer to when being called to supper, nor can it leap. “His sister stood beside him in her apron

To tell them ‘Supper.’ At the word, the saw,
As if to prove saws know what supper meant,
Leaped out at the boy’s hand, or seemed to leap—
He must have given the hand.”

That must mean that he was attached to it emotionally and personally. I did some background research and it is possible that he based it off of his neighbor’s son, Raymond Fitzgerald who cut off his hand with a saw and bled until he went into shock, causing heart failure. People either were not aware of the conditions back then, or they did and couldn’t do anything about it because they needed the money. In that time period, everyone in the family had to contribute to survive. I believe he was also making a statement towards the government for not making regulations on the age requirement of eligibility to work.

Poem Analysis on Out, Out- by Robert Frost. (2016, Mar 17). Retrieved from https://studymoose.com/poem-analysis-on-out-out-by-robert-frost-essay 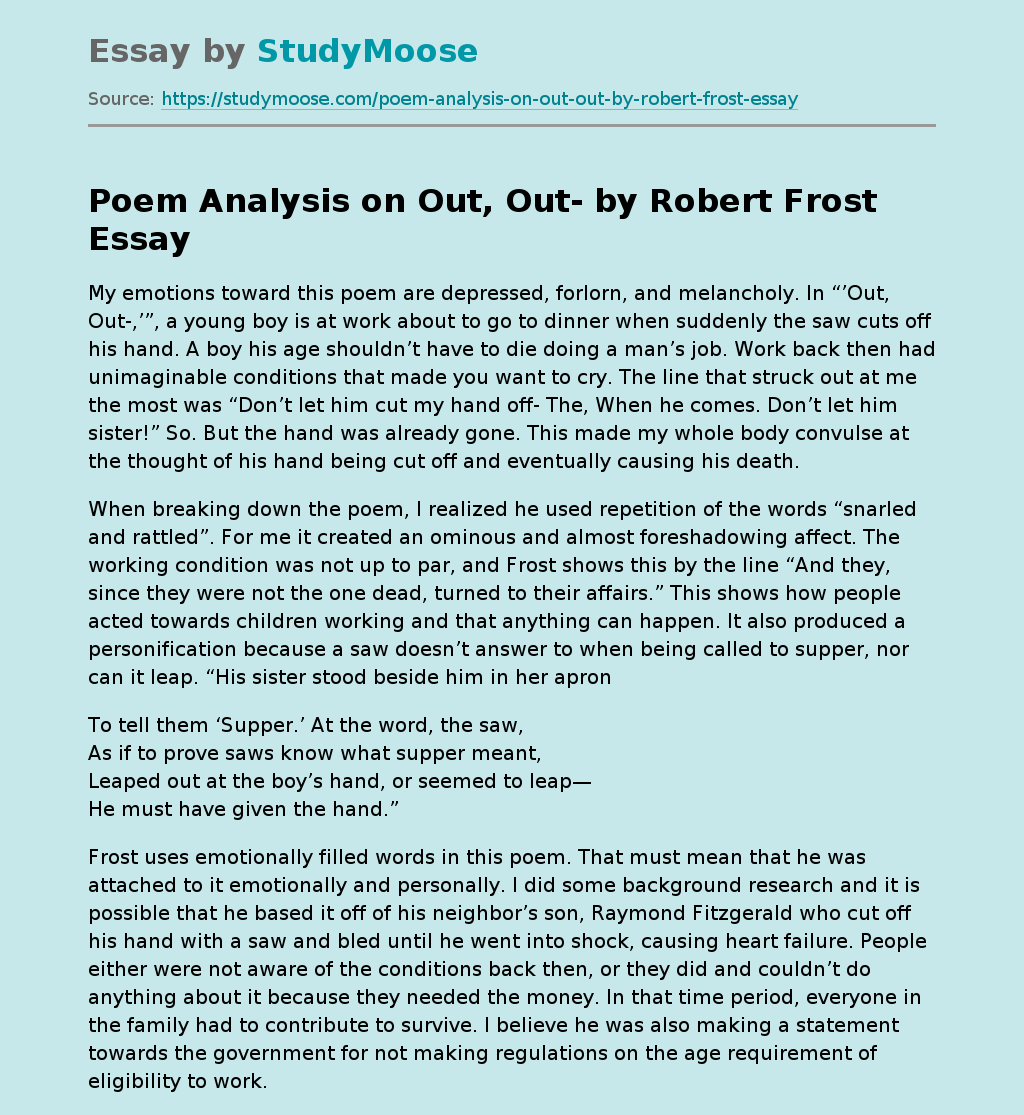