Do Animals Need A Bill of Rights?

Animals on a daily basis all over the world are being mistreated and abused by many people that do not care for them. There are very few people attempting to protect these animals, whether they are domestic animals, farm animals, or wildlife animals. More attention should be drawn to the treatment of animals because even if we do have laws for animals and for their well being, many people still do not follow these laws. The laws already established for animals should be enforced, because I do agree that animals need protection, as in free from any harm done towards them purposely, but to have a Bill of Rights specifically made for animals seems extreme.

Don't use plagiarized sources. Get your custom essay on
“ Do Animals Need A Bill of Rights? ”
Get custom paper
NEW! smart matching with writer

Proficient in: Animal Bill Of Rights

For example in the article “A Change of Heart about Animals” by Jeremy Rifkin states, “In controlled experiments, scientists at Oxford University reported that two birds named Betty and Abel were given a choice between using two tools, one a straight wire, the other a hooked wire, to snag a piece of meat from inside a tube.” This experiment was fine to conduct because in no way were these crows harmed.

The only thing the scientists were doing was observing the crow’s behavior.

If there needs to be experiments done to animals for whatever reason, the experiments should be conducted in a way that the animals are not harmed. Another reason for believing that animals need protection is that animals are being harmed or mistreated by people who have a habit of using animals for entertainment. A form of entertainment for humanity from animals in a cruel way is hunting wildlife animals and killing them or fishing. Lions, tigers, bears, dears, and cheetahs are examples of wildlife animals that are hunted and killed for either their meat or fur. Fishing is also a form of entertainment for sportsmen that catch fish to eat and don’t realize the pain caused to the fish when the sportsmen kill them. For example in the article, “Hooked on a Myth” by Victoria Braithwaite states, “Every year, sportsmen around the world drag millions of fish to shore on barbed hooks. It’s something people have always done, and with little enough conscience.” This shows how people do not think of the harm they are doing to fish.

Just because the fish are not crying or yelling with pain does not mean they are not feeling it. We as humans need to think of the animals as living as well. We humans may not understand them, but animals do have feelings and we need to pay more attention to their treatment. Animals are also used for research such as human’s closest relatives, which are apes, gorillas, and chimpanzees. There are people who believe since these specific animals are as close in DNA as us that they should be used for research to find out how our “species” function. In the article, “Of Primates and Personhood: Will According Rights and “Dignity” to Nonhuman Organisms Halt Research?” by Ed Yong, Franz de Waal of Emory University, says “I do think we have special obligations to the great apes as our closest relatives, but if we give rights to apes, what would be the compelling reason not to give rights to monkeys, dogs, rats, and so on?”

Apes should not be the only animals receiving rights only because they are our closest relatives. Other animals are being used for research and not cared for, why should they suffer? I believe it is inhumane of us to be so blind of all the harm being done to all animals just for our convenience. In no way do animal’s benefit from being killed and used as research, we on the other hand utilize them as if they were objects. The issue worldwide is that these animals are being mistreated and abused by humans and therefore should be protected from us, but not make a big decision such as making a Bill of Rights for animals. There are laws already established to protect these animals, and should just be enforced. If these laws are broken by us humans then we should have a punishment, but that’s all it should be a law to protect these animals and do no harm to them. We should not go to an extreme and create a Bill of Rights for animals.

Do Animals Need A Bill of Rights?. (2016, May 08). Retrieved from http://studymoose.com/do-animals-need-a-bill-of-rights-essay 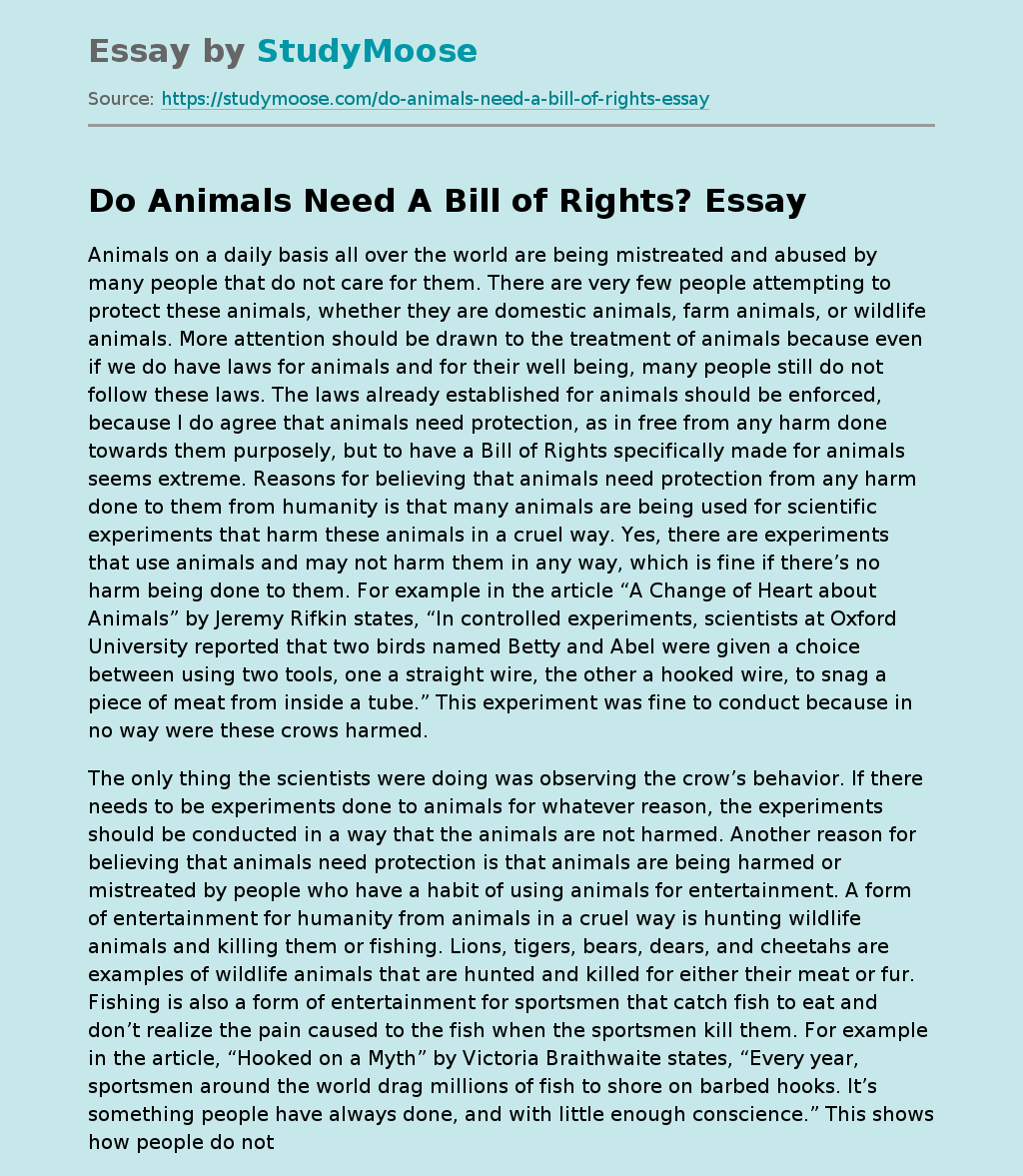