Distinction Between Male and Female in Victorian Society

But she is not trembled with the idea of marriage and family velour, as Hardy says, “the renewed subject, which seemed to have impregnated the whole family, filled Tess with impatience” (Hardy39). She condemns her parents for her pathetic condition.

Though she was notresponsible of the misfortunes of her life nor she committed them on her free will, she is punished forbeing born as a woman. Tess questioned her mother,”Why didn’t you tell me there was danger in men-folk? Why didn’t your warn me? Ladies know what to fend hands against, because they read novels that tell them of these tricks; but I never had the chance o’ learning in that way, and you did not help me!” (Hardy 120).

Don't use plagiarized sources. Get your custom essay on
“ Distinction Between Male and Female in Victorian Society ”
Get custom paper
NEW! smart matching with writer

Hardy highlighted the clear line of distinction between male and female in Victorian society. There are two distinctive sets of law for both of men and women. As Hardy said, women,”They writhed feverishly under the oppressiveness of an emotion thrust on them by cruel Nature’s law an emotion which they had neither expected nor desired.

The differences which distinguished them as individuals were abstracted by this passion, and each was but portion of one organism called sex” (Hardy 215 & 216).His eye opening remark- “Let the truth be told women do as a rule live through such humiliations, and regain their spirits, and again look about them with an interested eye. While there’s life there’s hope is a conviction not so entirely unknown to the “betrayed” as some amiable theorists would have us believe” (Hardy 153).

It establishes Hardy’s belief and hopes for women to be freed from the existing conventions. He also attacked the established belief that had been used to control women for the ages; in the context of the novel he affirms- “Women whose chief companions are the forms and forces of outdoor Nature retain in their souls far more of the Pagan fantasy of their remote forefathers than of the systematized religion taught their race at later date” (Hardy 152).

In the context of the novel, Alec was unnoticed and unharmed by his own brutality or animalistic behavior, where Tess bore this pain throughout her life being condemned and punished. But, when she ultimately succeeded to free herself from the grasp of that demon, society became active to preserve the law.

One act to redeem her turns her lifelong victimization into sin, in other words, she is punished for eliminating a demon from the world. In case of Angel, whom she loves unconditionally, also fails to come out of his male prejudice. He punished Tess for having an affair though he himself was the same.

Hardy had powerfully condemned the double standard of society wherewomen are expected to preserve their’purity’ which men can readily forfeit. Hardy made it clear in Tess of the D’Urberville that- “If she could have been but just created, to discover herself as a spouseless mother, with no experience of life except as the parent of a nameless child, would the position have caused her to despair? No, she would have taken it calmly, and found pleasures therein” (Hardy 133 & 134).

Distinction Between Male and Female in Victorian Society. (2019, Dec 06). Retrieved from https://studymoose.com/distinction-between-male-and-female-in-victorian-society-essay 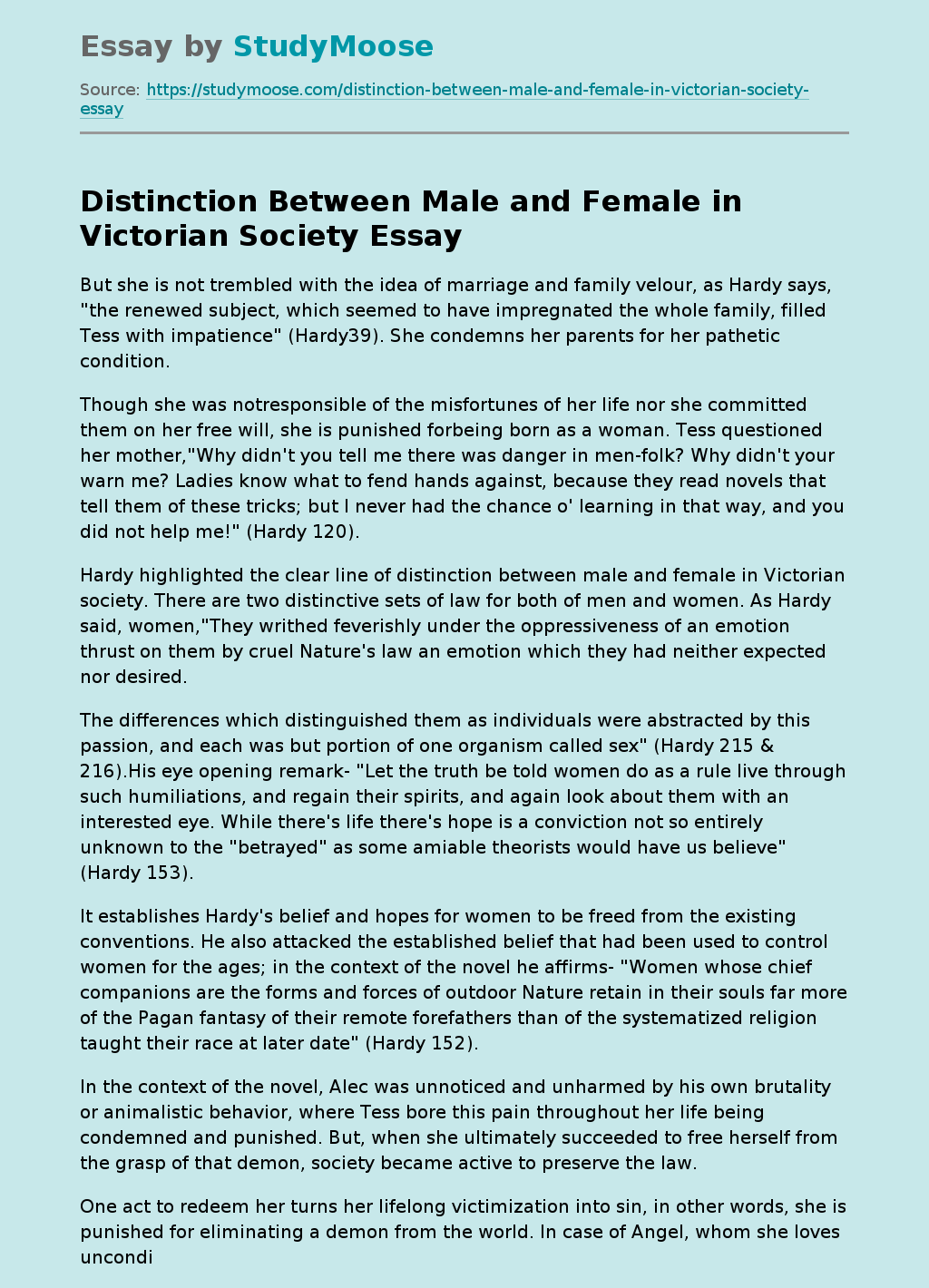