In agreement to Daniel J. Boorstin’s theory, one can recall several events in the history of America’s democracy when disagreement paved the path for discussions and solutions but dissent only produced greater separation. Disagreement is the basis for democracy because each citizen has a choice to agree or disagree and try to make a change. For example, in the 1950s, Brown v. Board of Education was a product of constant disagreement between Americans about whether segregation of schools is constitutional or not.

Because of these ongoing debates, the decision was made to end segregation in schools. Similarly, a tragic genocide in Sudan causes many arguments between the American people as the problem worsens and Americans must decide if they should step in. Again, the disagreement of the American democracy acts as its foundation for success and unity, while in Boorstin’s words, a democracy is “killed by dissension”.

If in the 1950’s, the African Americans chose to go on living with dissension, or deciding to forever “feel apart from others”, then perhaps America would not have a black president today.

Because many people disagreed with the harsh racial segregation and discrimination of that time, they were able to act on their opinions and make a change that influenced the future of America. African Americans fought for equality by disagreeing, instead of dissenting, and their efforts are evident in today’s unsegregated society. In Boornstin’s words, “A person who dissents is by definition in a minority”. The African Americans did not want to be known as the lesser minority, but by equal citizens of the American democracy, and the way they succeeded in making their struggles known was by debating and arguing against segregation and discrimination.

Brown v. Board of Education was an outcome of one of their acknowledged actions.

Because of this decision, segregation in schools were finally deemed unconstitutional. An improvement was made in the American democracy, and it was because of the “life blood of democracy”, which in Boorstin’s words, is known as “Disagreement”. Unlike the Brown v. Board of Education Decision, the American government mostly used dissension to deal with the genocide in Sudan. Some call it, “The Silent Genocide”, because there were many, many, casualties but there was no awareness for the issue. Although many recognized that the issue was appalling, few took action and produced debates and disagreements, causing the issue to linger instead of improve. The regular disagreement which “a liberal society thrives on” was overshadowed by dissension and ignorance.

The genocide in Sudan was not able to be fully helped, or helped at all at first. As Boorstin says, “dissension is its [democracy’s] cancer” and this is evident in this case because Americans chose to dissent and feel apart from this problem, which only caused it to get worse. Boorstin recognizes the differences between dissension and disagreement in a way that makes evident that dissent is unproductive to our society’s conflicts whereas disagreement serves as the first step to reaching a solution. While Brown v. Board of education is an example of how disagreement led to improvement, the issue of the genocide in Sudan showed how a great amount of dissension and a lack of discussion, disagreement and knowledge, can turn out to be a democracy’s “cancer”. 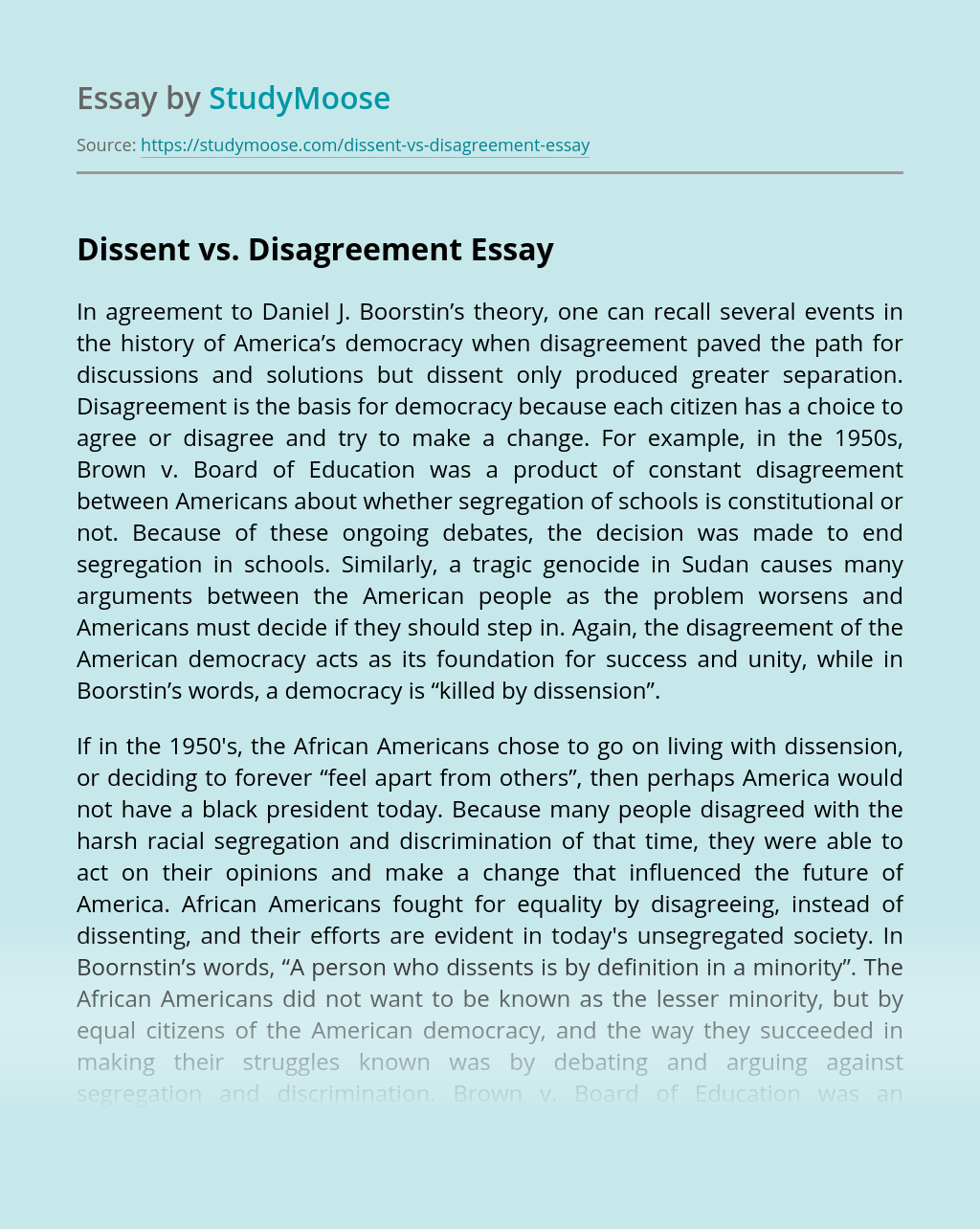 Don’t waste time
Get a verified expert to help you with Dissent vs. Disagreement
Hire verified expert
$35.80 for a 2-page paper
Stay Safe, Stay Original