Secularisation is the process of the decline of religious beliefs. Secularization can be measured in two ways. Firstly, there is the institutional approach that deals with church attendance and the societal approach which deals with the decline of people’s beliefs. Of course which method one chooses depends on how you define religion. Some sociologists such as Comte, Durkheim and Weber as well as others all believe that religion is indeed losing its social significance in modern societies. They believe that with industrialization, people would turn to rationalization.

Don't use plagiarized sources. Get your custom essay on
“ Discuss the Claim Made by Some Sociologists That in Modern Societies Religion Is Losing Its Social Significance ”
Get custom paper
NEW! smart matching with writer

However, there are others that don’t agree that religion is losing its significance. Firstly Comte believes that society would go through three (3) stages.

The first stage is the metaphysical stage where everything is controlled by abstract forces, the second stage is known as the theological stage in which philosophy would explain society and the final stage, the positive stage is where science dominates the society. As such, he didn’t see the existence of religion at all in society.

In addition, Durkheim believes that with industrialization and the introduction of science and technology, religion would lose its social significance. People would be more concerned with the material aspects of the world such as ‘partying’ and going to ‘fetes’. In addition, with the demands of a hectic life, people would not see the need to.

On the other hand, Weber believed that with industrialization, people would turn to rationalization. That is, they would turn to science and as such religious beliefs and practices would decline.

An example of this is where people opt to go to the doctor rather than have a ‘bush bath’. Shiner also believed that there would be a decline in religious thought and action in the society. Also people would start to question the scriptures and religious techniques. In addition, Wilson used statistics to prove that religion is indeed losing its social significance. Finally, Marx foresaw the decline of religion when the economic structure of the society had changed. On the other hand, there are sociologists that believe that religion will not lose its significance. Martin criticized Wilson’s view on religion by using statistics. He believed that this was not an appropriate way to measure secularization since it says nothing about people’s beliefs. In addition, Martin believed that secularization is a myth and does not exist.

Glasner also believed it is a myth and that it cannot be measured. Jose Casanova, although he believed in the concept of secularization does not fully believe that religion will lose its social significance in society but that people would turn to rationalization. Steve Bruce also noted that secularization is an illusion and it cannot be measured accurately. However, in today’s society religion does play a significant role in the lives of the people. Many persons try to go to church and take part in their religion. However, there are others who do not go to church. May people are caught up with their hectic life and do not have time to go to church. There has also been a decline in religious thought and action due to science. Despite this, a number of measures could be put in place to help people see how important religion is. Parents, community leaders as well as the religious leaders must play their part and set better examples. In addition, youths should be given more responsibilities in the church and as such they won’t feel alienated. Hence we must do whatever we could to ensure that religion continues to play a vital role in our society.

Discuss the Claim Made by Some Sociologists That in Modern Societies Religion Is Losing Its Social Significance. (2016, Apr 11). Retrieved from https://studymoose.com/discuss-the-claim-made-by-some-sociologists-that-in-modern-societies-religion-is-losing-its-social-significance-essay 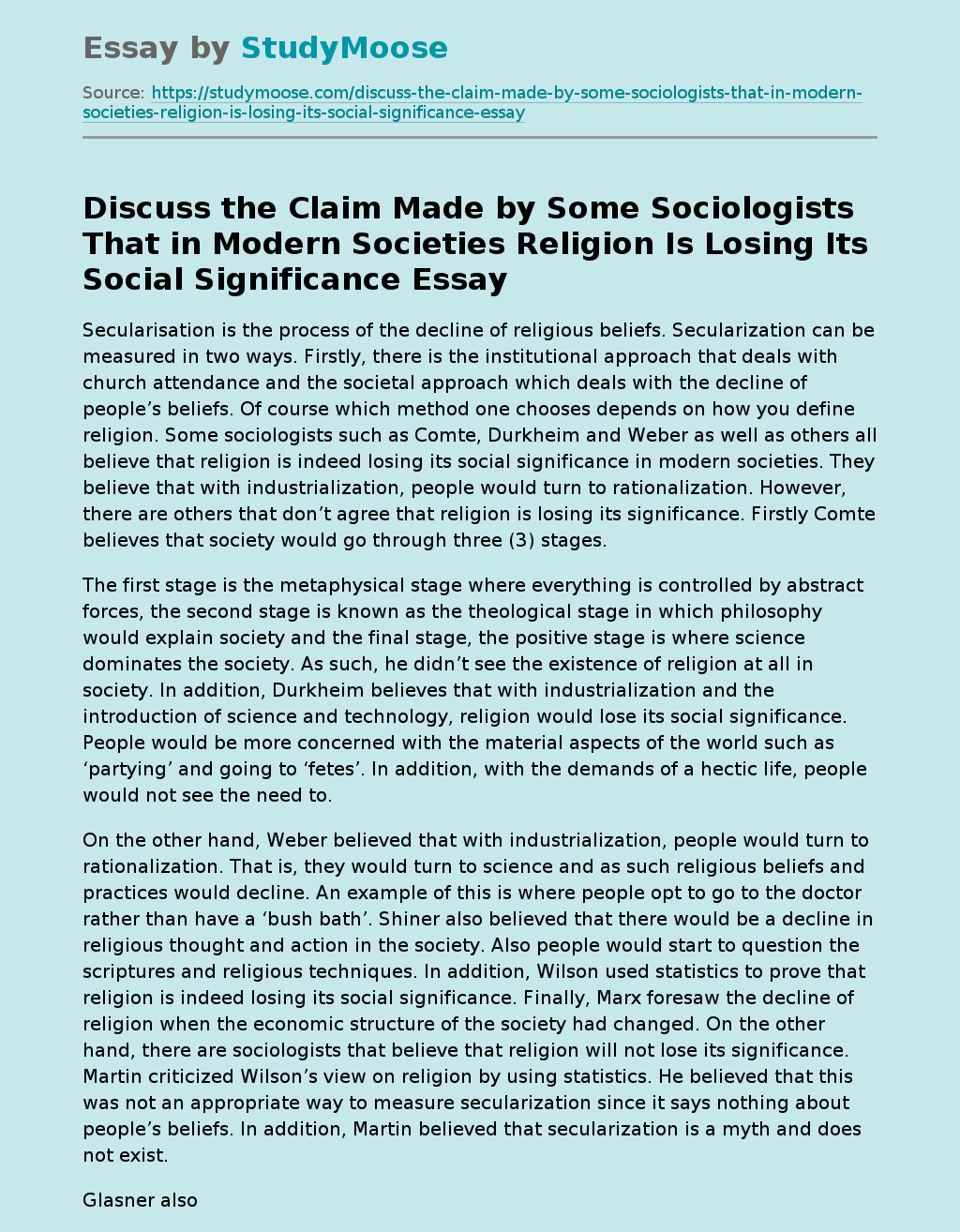