In this era, the prosperity of advance technology is blossoming like mushrooms growing in the back yard. Meanwhile, invented in 1973 by Martin Cooper, mobile phones nowadays are becoming one of the most popular pieces of technology and nearly everyone own a cell phone. Nonetheless, mobile phones bring not only easiness in communication area, but also many negative effects. Therefore, I am convinced that negative health effects, the effect on children and the infertility in men are the main disadvantages of using mobile phone.

Don't use plagiarized sources. Get your custom essay on
“ Disadvantages of mobile phone ”
Get custom paper
NEW! smart matching with writer

First, negative health effects of using mobile phone have been proved by many studies. From the studies, mobile phone can emit microwave radiation that is detrimental to health. In fact, many reports on the health risks of cell phones have been published over the last few decades. A study led by Dr Agarwal, gives the consequences of the microwave radiation when you use cell phone. First, electromagnetic waves alter electric activity of the brain and cause disturbance in sleep; cause difficulty in concentration, fatigue, and headache; and increase reaction time in a time-dependent manner.

Another is that they increase the resting blood pressure and reduce the production of melatonin.

Moreover, they are also implicated in DNA strand breaks. In addition, the use of cell phones has also been related to Alzheimer’s disease and Cancer. In 2002, Hardell et al published a study titled ‘Cellular and cordless telephones and the risk for brain tumours’ in the European Journal of Cancer Prevention. Hardell et al found that people who used cell phones were two and a half times more likely to have a temporal brain tumor on the side of the head where they held their phone.

In the case of tumors of the auditory nerve, which connects the ear to the brain, the risk increased to more than three times for cell phone users. In short, mobile phone is able to harm users’ health according to these studies.

Second, the health effects of cell phone radiation on children are very worrisome. Some studies have come up with many conclusions. For example, in a study called “How Exposure to Mobile Phone Base-Station Signals Can Adversely Affect Humans” Dr Hyland explains why children are more vulnerable. Preadolescent children are more vulnerable to microwave radiation because of their thinner skulls, there still developing nervous systems, their increased levels of cell division, and their less robust immune systems.

The Stewart Report, a report commissioned by the British Parliament, explains the effect of cell phone radiation on children that a one-year-old child could absorb around double the radio frequency radiation (RF), and a five year old around 60%, more than an adult does. Additionally, since children are being exposed to radio frequency radiation from mobile base stations and from mobile phones from a younger age than adults, they will have a longer time to accumulate exposure over the period of their lives. Overall, the radiation caused by cell phones has a negative effect on the health of children.

Third, the microwave radiation emitted through mobile phone use is not only a cause to health, but also a cause of infertility in man. It has effect to sperm quantity and quality. In 2008, an observational study titled “Effect of cell phone usage on semen analysis in men attending infertility clinic” shown the result that the use of mobile phones by men is associated with a decrease in semen quality. Furthermore, the decrease in sperm count, motility, viability, and normal morphology is related to the duration of exposure to cell phones. In another research, in 2005, titled “Is there a relationship between cell phone use and semen quality” was conducted by Dr. Fejez et al. He analyzed the impact of cell phone use on the semen of 371 men. This study concluded that the longer a cell phone is used on a daily basis, the bigger the effect on the sperm quality.

Moreover, longer exposure resulted in larger percentage of slower sperm, which may be caused by “electromagnetic radiation emitted from cell phones”. To sum up, according to many studies cell phone use has a negative impact on sperm quality, which escalates infertility in men. In summary, using mobile phone has three bad consequences such as negative health effects, the negative effect on children and infertility in men. The current safety standards for microwave radiation emitted by cell phones should be developed and enforced. Generally, nothing is perfect, so you had better prevent your families and yourselves from the negative effects of mobile phone. For example, do not allow your children to use a cell phone, unless there is an emergency; ensure there is no cell phone mast approximately to your home; and reduce the unnecessary uses of mobile phone. 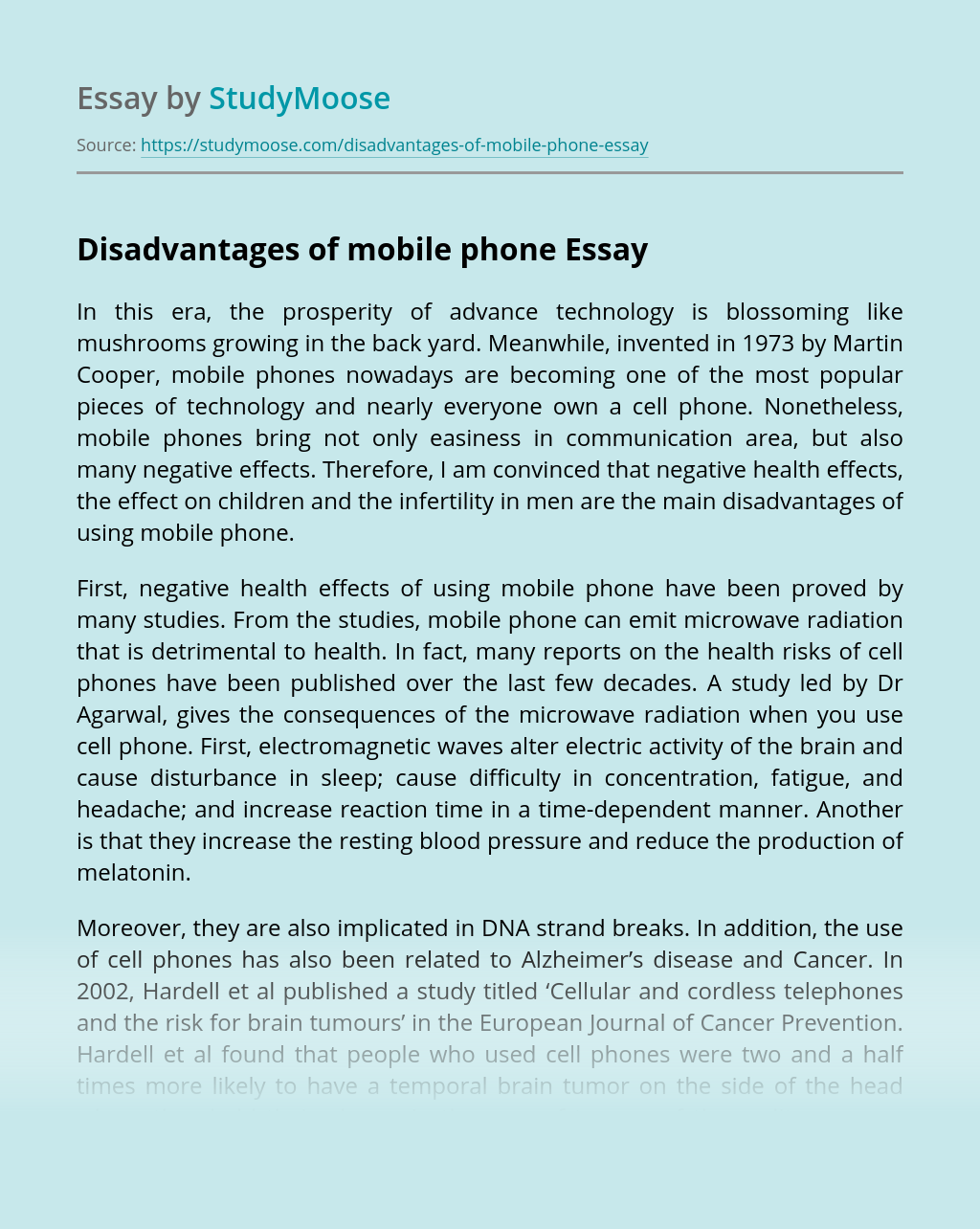