Mobile Phone Usage Among the Teenagers

Mobile phones have become very popular in recent years and their development has been amazing. It is no wonder why they have become irreplaceable. With all applications which go with them they have gained a huge popularity with the people nowadays especially the teenagers. A mobile phone (also known as a cellular phone, cell phone and a hand phone) is a device which can make and receive telephone calls over a radio link whilst moving around a wide geographic area.

Don't use plagiarized sources. Get your custom essay on
“ Mobile Phone Usage Among the Teenagers ”
Get custom paper
NEW! smart matching with writer

It does so by connecting to a cellular network provided by a mobile network operator. The calls are to and from the public telephone network which includes other mobiles and fixed-line phones across the world. Cell phones are a great invention and a popular way to communicate—almost every individual in the Philippines have and owns a cell phone. They allow us to work on the go and stay in touch. When put in the hands of a teenager, however, they can have some effects of which adults should be aware.

Cell phones provide security for teens and parents who worry about them; help is never out of reach and parents can check on their children easily. Teens’ natural tendency to follow trends may result in an emotional attachment to a cell phone (in its latest model) that is out of scale with its actual value. Some teens may even develop an “addiction” to the device that excludes anything not viewed or heard. Cell phones allow only verbal, disembodied relationships at a time when adolescents should be working on developing a sense of their own—and others’—physical space.

It is a common sight – cell phones (mobile phones) in the hands of people, especially teenagers. Literature has provided in-depth evidence of the uses, advantages, disadvantages, impact, consequences and concerns about the use of mobile phones. Why teenagers fancy this device, is an interesting observation where the experts attach its significance to teenagers’ identity factor. The usage of mobile phones has re-shaped, re-organized and altered several social facets. Particularly focusing on teenagers’ mobile phone usage, literature has provided evidence of them being used for both positive purposes and negative reasons.

The spread of mobile communication among Finnish teenagers has been markedly rapid during the latter half of the 1990s. Young people have created and developed a communication culture that incorporates many special features, such as a rise in the use of text-based communication channels. Teenagers’ intersecting and selective use of communication channels has generated multimedia communication. If this is the case, how could we describe and analyze these new forms of interaction? The media landscapes created by teenagers serve to articulate their personal space, as well as enabling their presentation of self and defining their relationships to others.

1.2Statement of the problems

1.2.1What are the advantages and disadvantages to the socialization that teenagers could get from using the cell phones?

1.2.2 What could be the effects to the teenager’s health in being addiction of cell phones?

1.2.3 How the cell phones can be use properly by teen agers?

A further breakup of age groups indicated that all the 17-19 olds had mobile phones. In addition, not possessing mobile phone/s is higher in the age bracket 15-16 year olds when compared to 13-14 olds. The spread of mobile communication among

teenagers has been markedly rapid during the latter half of the 1990s. Young people have created and developed a communication culture that incorporates many special features, such as a rise in the use of text-based communication channels. Teenagers’ intersecting and selective use of communication channels has generated multimedia communication. From the theoretical standpoint provided by symbolic interactions, we can ask whether communication through new media technologies generates new forms of social interaction. If this is the case, how could we describe and analyze these new forms of interaction? The media landscapes created by teenagers serve to articulate their personal space, as well as enabling their presentation of self and defining their relationships to others.

The quality of sleep of almost half of 16 year olds may be affected by text messaging on mobile phones, a study from Belgium says. The sleep of one in four 13 year olds could be affected too, says the researchers, who looked at the effects of text messaging on sleep interruption in teenagers (Journal of Sleep Research (2003:12:263). In the research, about 2500 first and fourth year children (aged 13 years and 16 years respectively) in the Leuven study on media and adolescent health (SOMAH) based in Flanders, Belgium, were asked how often they were awoken at night by incoming text messages on their mobile phone.

The influence of mobile technology on our lives is huge and even greater on teenagers. In the age in which they’re developing as individuals all that mobile phones birng leaves a strong trace on their growing up. The usage of mobile phones in their age should be controlled but they shouldn’t be discouraged from using them as they bring many benefits.

Mobile Phone Usage Among the Teenagers. (2016, Nov 08). Retrieved from http://studymoose.com/mobile-phone-usage-among-the-teenagers-essay 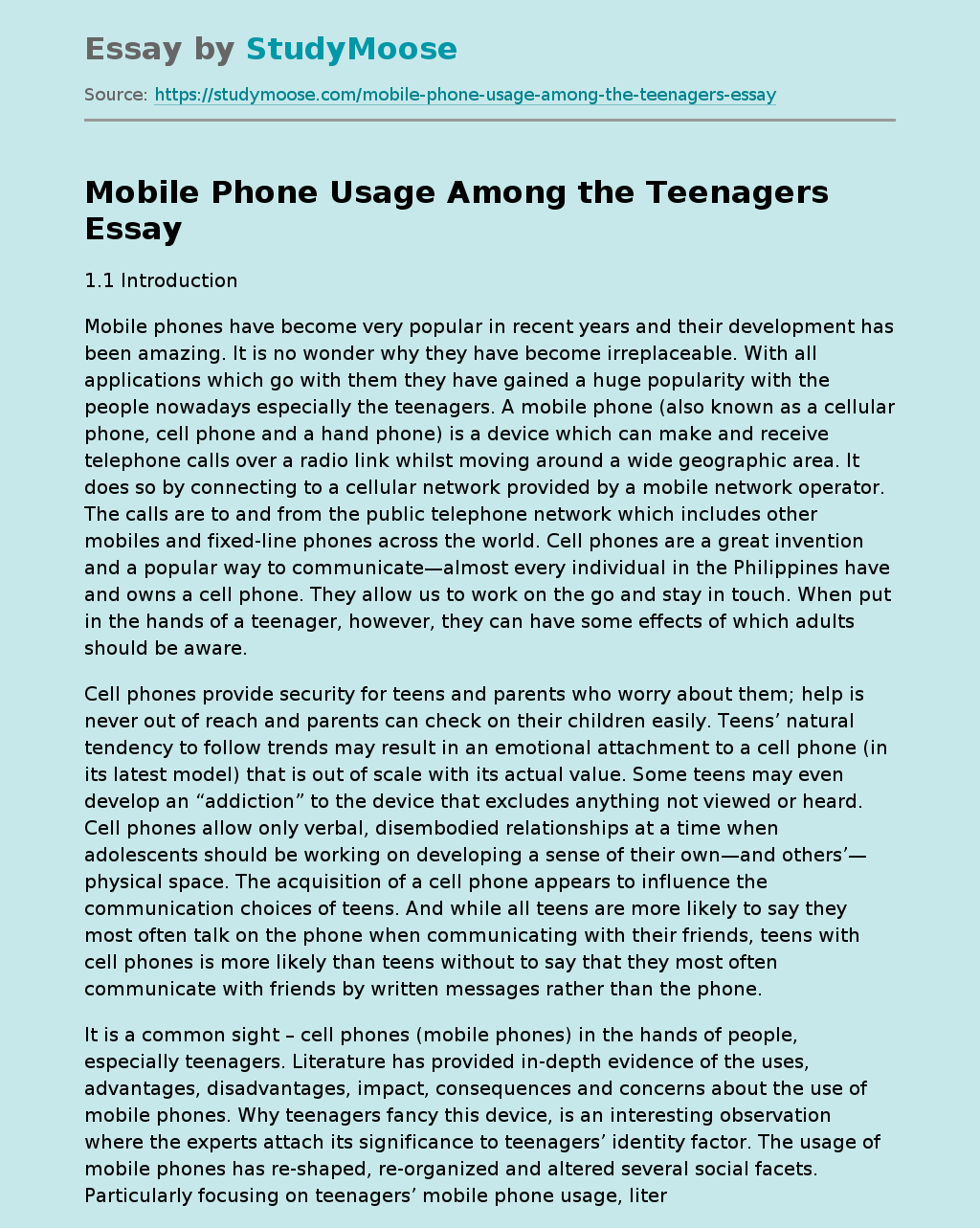