In many families, fathers take pride in receiving remarks regarding their sons such as “He’s a chip off the ol’ block” or “like father like son,” often exalting the sons who have followed in their fathers’ vocational footsteps. In “Digging,” by Seamus Heaney, the speaker describes the quintessential potato farming tradition that his father and grandfather partake in, while the speaker himself observes through a window barrier. Seamus Heaney, through his use of imagery, repetition, and extended metaphors, reveals his feelings in straying away from Irish tradition to follow his own path in writing.

Don't use plagiarized sources. Get your custom essay on
“ “Digging” by Seamus Heaney ”
Get custom paper
NEW! smart matching with writer

In his poem, Heaney utilizes imagery to further emphasize the speaker’s action in choosing a different job than potato farming. The speaker begins at a windowsill, with a “squat pen” resting “as snug as a gun” in his hand. Heaney’s description connotes a sense of defense, almost as if the narrator sees himself as an old wilderness-survival junkie, sitting on the porch with a gun to defend his property from government officials, but in “Digging,” the speaker defends his choice in jobs.

Later on in the poem, the speaker describes the actions of a potato harvester, who must endure the “cold smell of potato mold [and] the squelch and slap of soggy peat.” Heaney’s images of mold and soggy mud convey the speaker’s true feeling and apprehension toward the sickening, gross environment in which his father and grandfather work.

In the same way, Heaney’s repetition further alludes to the speaker’s need and desire to write.

In the first and last stanzas of the poem, the speaker repeats the same sentence: “Between my finger and my thumb / The squat pen rests.” As a starting point in the poem, the speaker directly jumps to his comfort zone—describing his love for putting pen to paper, yet as an ending note, the narrator reemphasizes his possession of not only the pen, but of his life choices.

Also, Heaney often uses the word “digging” as a separate prepositional phrase during a sentence, reiterating the word to simply give the reader a sense of the mundane life his father is living. There are no adverbs surrounding the word; simply put, the speaker evokes a sense of nothingness that is associated with “digging” a hole in the ground, only to fill said hole with a potato and cover it back up—a menial task for which he has no inclination. Again, Heaney repeats some phrases in order to accentuate his aversion to the job of potato harvesting.

Lastly, Heaney implements extended metaphors throughout his poem to subtly convey his feelings towards his father’s tradition. As stated earlier, the repetition of “digging” also connotes a deeper meaning—the speaker, while also observing his father literally dig through the mud and peat, figuratively digs through his memories of his family, recalling the days when he would help his grandfather out in “Toner’s bog.”

In the second to last verse, the speaker alludes to revisiting the past by stating the “living roots awaken in my head.” The roots, although they can refer to the physical roots in the ground, symbolize the narrator’s family roots in potato farming, a culture that is associated with digging into the ground to find food and money in the form of potatoes. In the end, the speaker ends the metaphor of digging, noting he will “dig,” but not with the spade, but with his pen.

Seamus Heaney’s poem “Digging” tells a tale of a man musing about his decision to leave behind family convention. Heaney employs a series of images that convey the speaker’s feelings, repetition to show the narrator’s dislike of potato harvesting, and metaphors to provide an underlying message about tradition. In the end, the speaker is left commenting on the spade, his father and grandfather’s tool of choice, while he himself chooses the pen.

“Digging” by Seamus Heaney. (2017, May 16). Retrieved from https://studymoose.com/digging-analysis-essay 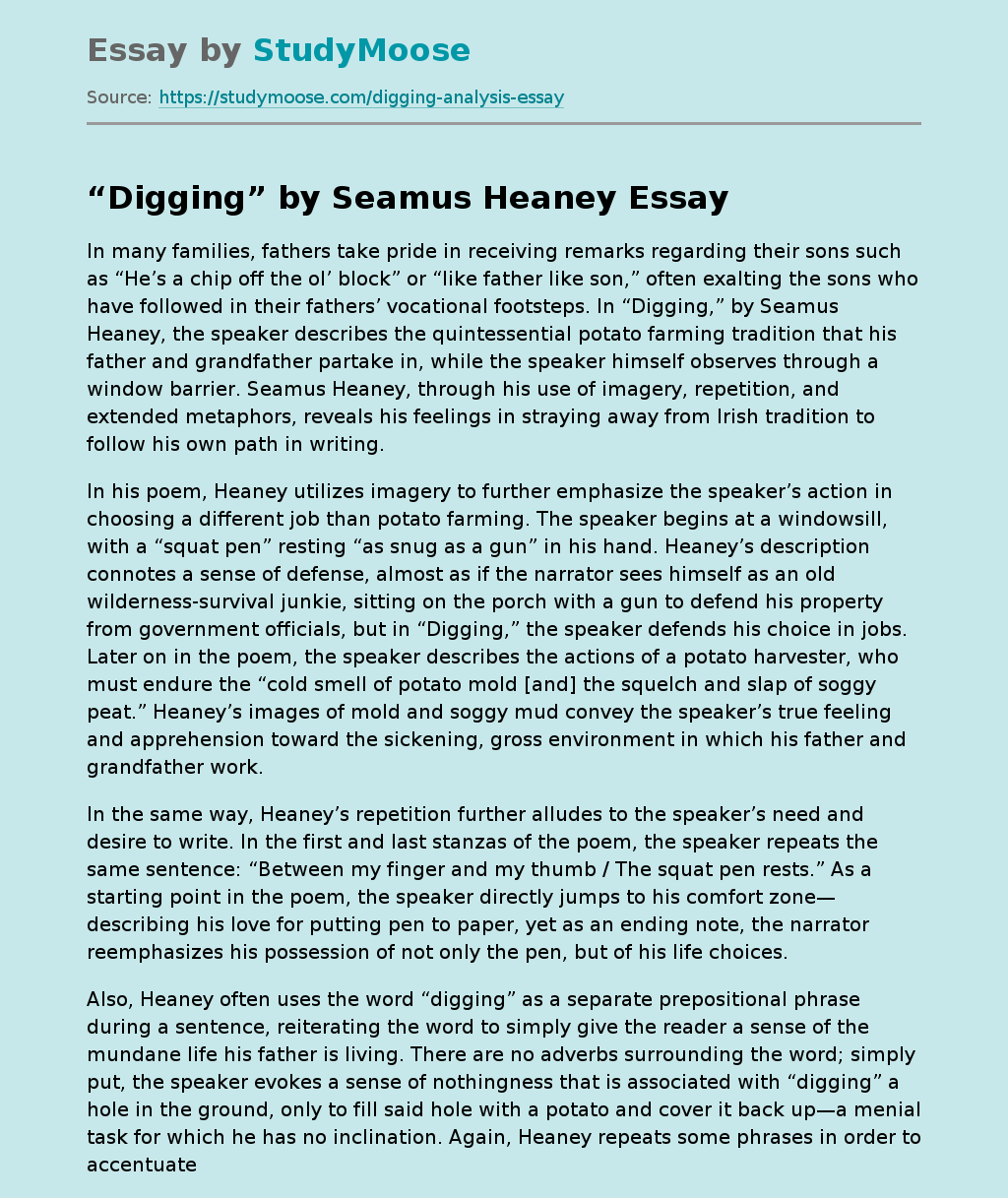