Did the Industrial Revolution improve life for people?

The Industrial Revolution was a time of drastic change, for both the better and worse. Changes like factories, steam power, and more people flocking to the city generally improved life. However, these changes also meant that working conditions declined, and massive increases in pollution and disease. The above suggest that the Revolution had pros and cons. Population growth changed Britain’s life style immensely. The Industrial Revolution witnessed a huge growth in the size of British cities. In 1695, the population of Britain was estimated to be 5.

Don’t waste time
Get a verified writer to help you with Did the Industrial Revolution improve life for people?
Hire verified writer
$35.80 for a 2-page paper

5 million. By 1801, it was 9.3 million and by 1841, 15.9 million. This represents a 60% growth rate in just 40 years. On average, 20 people shared a small house of four rooms. One toilet was shared by 120 people. This meant that there was not enough clean water or sewage for everyone, and disease spread easily. On the other hand, more people in Britain meant that more food, clothing, and everyday items were needed. The people also provided the workforce for the new industries.

The new factories were often terrible places for people working in them.

Punishments were harsh: for example, if a worker talked, left the working room without consent of the overseer was late to work, or broke any equipment, they would be fined. The factories were often also extremely dangerous- especially for girls, with their long dresses, aprons and hair. Workers would sometimes get caught in the machinery, resulting in horrible injuries or even death. While jobs were created, there were few if any rules about how much people could be paid, what training they would receive and whether they could be fired for any reason.

The jobs were dangerous and if you died, no one really cared. There was no unemployment or sick pay: with no job, you got no wages, and could starve. However, wages in the factories were higher than on farms and jobs were plentiful. On the other hand, factories also improved peoples’ daily lives – by expanding the number and quality of the kinds of products factories could turn out, ordinary British lived better and had more time on their hands as conveniences and efficiencies defined the Industrial Revolution.

Factories in the major cities created hundreds of thousands of jobs, expanded the cities and attracted immigrants by the millions. – The Industrial Revolution turned out many notable inventions like the battery, the telephone, and the calculator. The huge growth of business and factories meant that our transportation network expanded out of necessity and brought us canals and highways. The success of the Industrial Revolution depended on the ability to transport raw materials and finished goods over long distances. The growth in transportation meant that we now have cars, bicycles, traffic lights and trains. To conclude, the Industrial Revolution changed Britain for both good and bad. However, there is more evidence above to show that the Industrial Revolution did not improve life for the people of Manchester during the time. Regardless, there is no denying that the Revolution brought on more technology, wealth and power to modern society, and that it had a huge impact on the world and shaped the world to what it is today.

Did the Industrial Revolution improve life for people?. (2016, Mar 12). Retrieved from http://studymoose.com/did-the-industrial-revolution-improve-life-for-people-essay 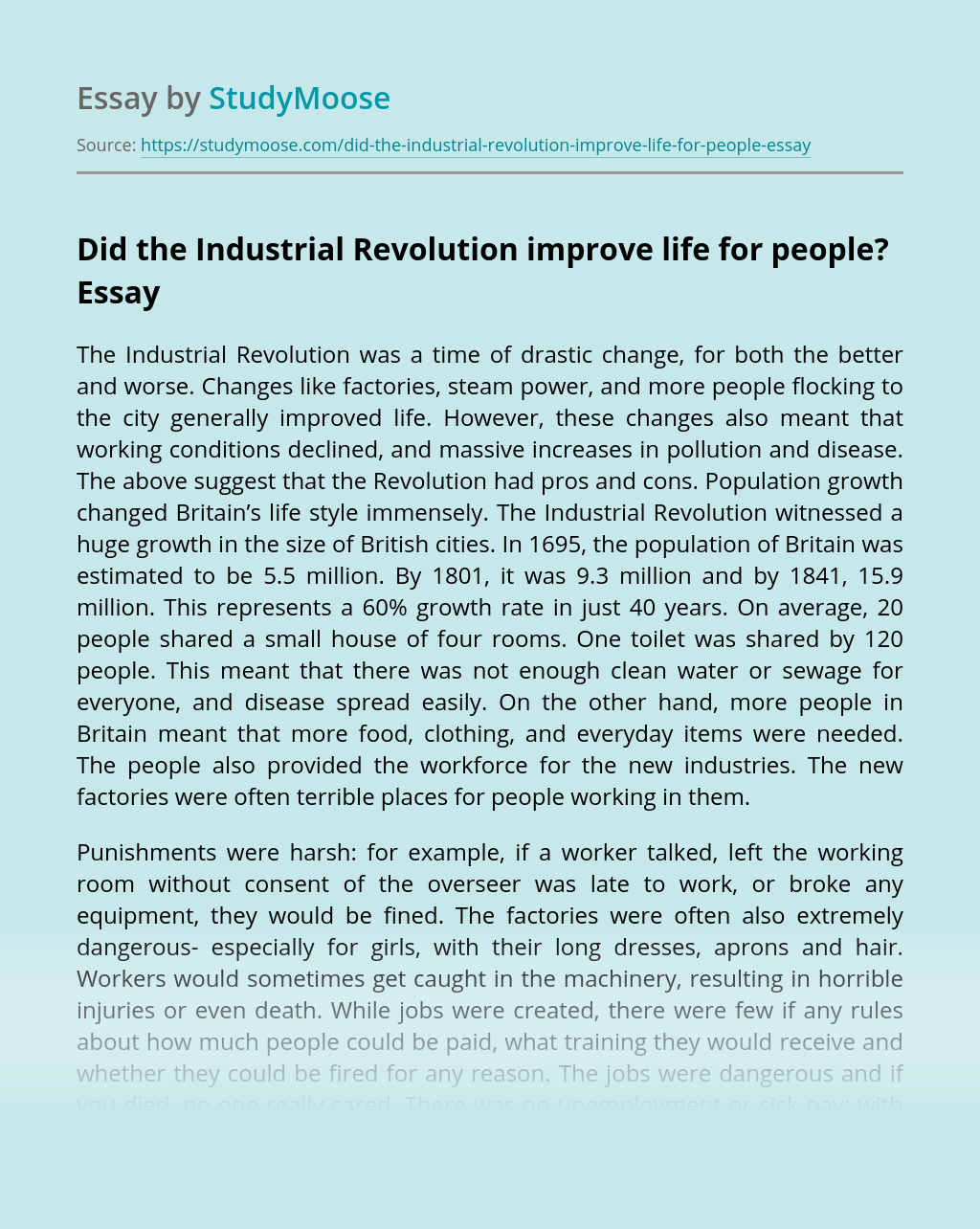 Don’t waste time
Get a verified writer to help you with Did the Industrial Revolution improve life for people?
Hire verified writer
$35.80 for a 2-page paper
Stay Safe, Stay Original