In sociology, the term deviance refers to behaviors or attitudes which go against certain cultural norms. It is evident that deviance is a fascinating topic not only for sociologist, but for television industry and its viewers, as well. In recent years, increasing number of shows begun to feature individuals violating every kind of social norm from folkways to taboos. The Secret Life of the American Teenager, an American television series on the ABC Family television network, is one of the many contemporary shows that portray deviant behaviors on national television.

Don't use plagiarized sources.
Get Your Custom Essay on Deviance on Television Just from $13,9/Page

It’s intended for the target audience of teens and their families who are trying to cope in a culture where teen girls and boys are sexually active.

I chose this particular show, because of one key reason. Secret Life of the American Teenager explores a teenage taboo. It is reflective of a new strain in American morality that accepts teenage sexual exploration, teenage pregnancy, and all other forms of deviance and misconduct.

When Secret Life first debuted, it was supposed to be a “cautionary’ tale about teenage pregnancy, but it is handled more like a deviant soap opera. Not only does an abstinence-only, pro-life agenda appear to be advocated, but that Secret Life also portrays negative historical stereotypes about gender, race, and sexuality. This programming depicts adolescent sexuality in terms of a heterosexual script which situates traditional gender roles as prohibited by hegemonic masculinity as the norm, as well as reinforces a sexual and racial double standard.

There are two major sociological terms demonstrated on Secret Life of the American Teenager. The first term is deviance, a behavior, trait, or belief that departs from a norm, is projected through these four characters. Amy Juergens is a fifteen year old “good girl” in high school who plays the French horn and wants to someday attend Juilliard. At summer band camp, prior to starting her freshman year, Amy has a one night stand with Ricky Underwood and becomes pregnant. Grace Bowman is a seventeen-year-old head cheerleader and is a devoted Christian. She had taken a vow of abstinence, but breaks her vow of chastity-until-marriage and loses her virginity to Jack, her on again/off again star of the football team boyfriend.

Anne Juergens and George Juergens, parents of Amy both committed adultery. George was cheating on his wife Anne, with Adrian’s mother, Cindy Lee. Anne also had a sexual affair with a coworker and became pregnant right after Amy did. She is not certain, if the baby was from her new (but now ex-) boyfriend David or her ex-husband George. The second term is Labeling Theory, a theory that society creates deviance by identifying particular members as deviant, is projected through this one character. Adrian Lee is an eighteen-year-old majorette. She has gain a reputation for being promiscuous and enjoys casual sex, so after she gets that name she tries and lives up to it. She begins sleeping around with about every guy, even with her new stepbrother.

The deviances on Secret Life were condemned. The characters faced the consequences of their deviant behaviors. Their trust with each other was broken and their relationship with one another was ruined, because of these, as well. Amy Juergens struggled to balance her life as a new single mother and high school student. She has a rocky relationship with Ricky, the father of the child, as he struggled to accept fatherhood responsibility. Grace Bowman’s loving, respectful and open relationship with her family was ruined, after violating their rules and advice and making her own decisions about matters such as boys and sex. Her father died in a plane crash and she felt responsible for it. Anne Juergens and George Juergens got divorced, after fifteen years of marriage, because of their marital affairs.

I personally know three teenagers that got pregnant at the age of sixteen. Watching this show reminds me of those three people. This show helps me gain a better understand on what teen mothers are going through. However, some viewers might think otherwise and disagree with me. After all, each of us has different perception on certain matter. Some viewers might think it is a dumb show and that it is not appropriate to watch, because of its explicit scenes and language. But, I personally think that the series can be an eye opener or a series that people, especially teenager can learn from.

The series did a great job on projecting the consequences of teenage pregnancy and how it has great effects not only to one’s self, but to one’s relationship with friends and family, as well. Therefore I conclude that television shows become not only a form of entertainment, but also a representation and instruction manual of the American way of life. Television shows mirror what is actually present in society. They reflect the social structure of society in their selection and presentation of characters.

They portray the actual workings of real societal institutions and reflect accurately common cultural attitudes, values, and beliefs. Not only does television shows reflect societal goals and norms, but that content changes on television broadcasts are largely due to changes in social values and sensibilities. The changes in cultural mores give rise to new genres of television and new formulas for representing the world. Television then reinforces these new mores as it reflects them across the screen and into viewers’ homes. Audiences rely on the information they receive from television to make inferences about normal and acceptable human behavior. Not only does television reflect contemporary standards of social behaviors, but it also has the ability to generate and change these standards as well. 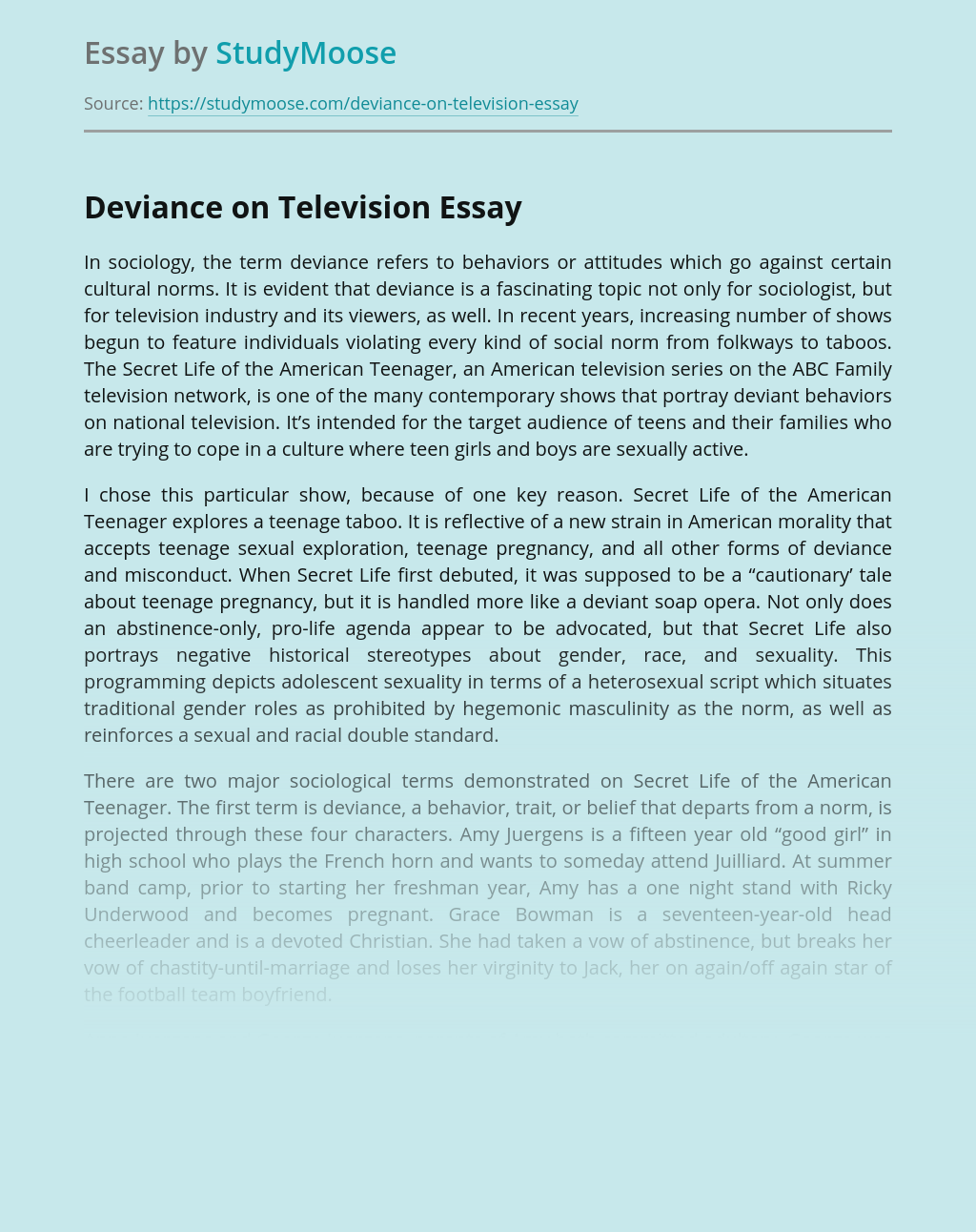 A structuralfunctionalist perspective concrete more on how

Issue 1: Absence of planning for the startup business. Analysis and Recommendation: The founder of the CanGo Company had given little thought to the long range plans and direction of the company beyond the basic steps required to get the business in place. The organization’s successes could be attributed to the unique niche the CEO...

Get Essay
Studying The Tale Of Genji English Literature Essay

To get down with Genji is a immature adult male who has the power to govern over his people. He has good expressions and uses this to court a batch of adult females. He can hence be termed as an self-seeker. In that he uses what he has to take advantage of a certain state...