I see worldviews as a philosophical orientation about reality and the nature of knowledge. It is crucial to reflect on and be able to articulate one’s worldview because the philosophical underpinnings of that worldview will often guide the purpose of inquiry and the choice of research approaches (Creswell & Creswell, 2018). Upon reading literature regarding several major worldviews that researchers often bring to their inquiries, I find myself most strongly resonate with the constructivist worldview (also described as the interpretative paradigm in some literature).

Don't use plagiarized sources. Get your custom essay on
“ Development Of Nursing Philosophy ”
Get custom paper
NEW! smart matching with writer

This worldview is focused on deriving subjective meaning from the human experience (Lincoln, Lynham, & Guba, 2017).

The ontological and epistemological aspects of constructivism will be discussed in this paper, followed by a detailed elaboration of a specific nursing worldview that is coherent with the constructivist worldview.

In contrast to realism, the ontology of constructivism is relativism which means that multiple, instead of one, realities exist. Moreover, the reality is not independent of the researcher, but rather socially constructed based on human experience (Lincoln, Lynham, & Guba, 2017). Thus, reality can be identified through the language and other symbols that express individual mental constructions regarding various situations (Shah & Al-Bargi, 2013).

Contrary to dualist and objectivist, the epistemology of constructivism is transactional and subjective in nature (Lincoln, Lynham, & Guba, 2017). The researcher and the participants do not remain distant and independent of each other. Instead, the researcher will have substantial contact with the participants. Through these subjective interactions, the researcher is able to interpret the observed phenomena, understand the human experience, and eventually achieve conceptualization (Monti & Tingen, 1999).

The organic worldview espouses that human beings are holistic entities “recognized through patterns of behavior”, and the whole “is more than and different from the sum of parts” (Fawcett, 2012, p.10). This view is widely accepted in the discipline of nursing as nurses are enabled to deliver authentic care to patients when nurses do not reduce patients into isolated physical parts but perceive patients as multidimensional human beings (McEvoy & Duffy, 2008).

The elements of simultaneity emphasize the human-environment relationship as a continuous interchange (Fawcett & DeSanto-Madeya, 2012). In other words, human beings do not merely react to the environment passively, but rather, interact with and are shaped by their environment. As a result, constructivist researchers often take the contexts of the participants’ experience into careful considerations (Creswell & Creswell, 2018).

According to the simultaneous action worldview, human beings do not adapt for the purpose of survival alone, and thus, changes occurred in human beings do not always manifest in a cause-effect relationship. Instead, changes arise in a continuous and unpredictable way, vary from individuals, and are complex in nature (Fawcett & DeSanto-Madeya, 2012).

The unitary-transformative component of the simultaneous action worldview states that phenomena of interest are created through personal values, and therefore, it is subjective and cannot be measured as good or bad (Cody, 1995). The simultaneous action worldview implicates that health is considered to be constructed from personal choices based on patients’ value priorities (Fawcett, 1993). Therefore, the goal of nursing is not solely focused on restoring the patients to the objective social norm since health is considered a subjective phenomenon. Rather, the goal of nursing aims to improve the quality of life and strives to understand the reasons behind the personal choices that patients make of their health behaviors (Cody, 1995).

In conclusion, my philosophical worldview is most aligned with the constructivist worldview. I believe that reality is context-dependent and open to subjective interpretations. Knowledge is created through understanding the meaning of human interactions with the environment. The simultaneous action worldview of nursing agrees with the ontological and epistemological aspects of constructivism. In addition, two main characteristics of constructivism—subjectivity and value-laden knowledge—are highly exemplified in the simultaneous action worldview of nursing. 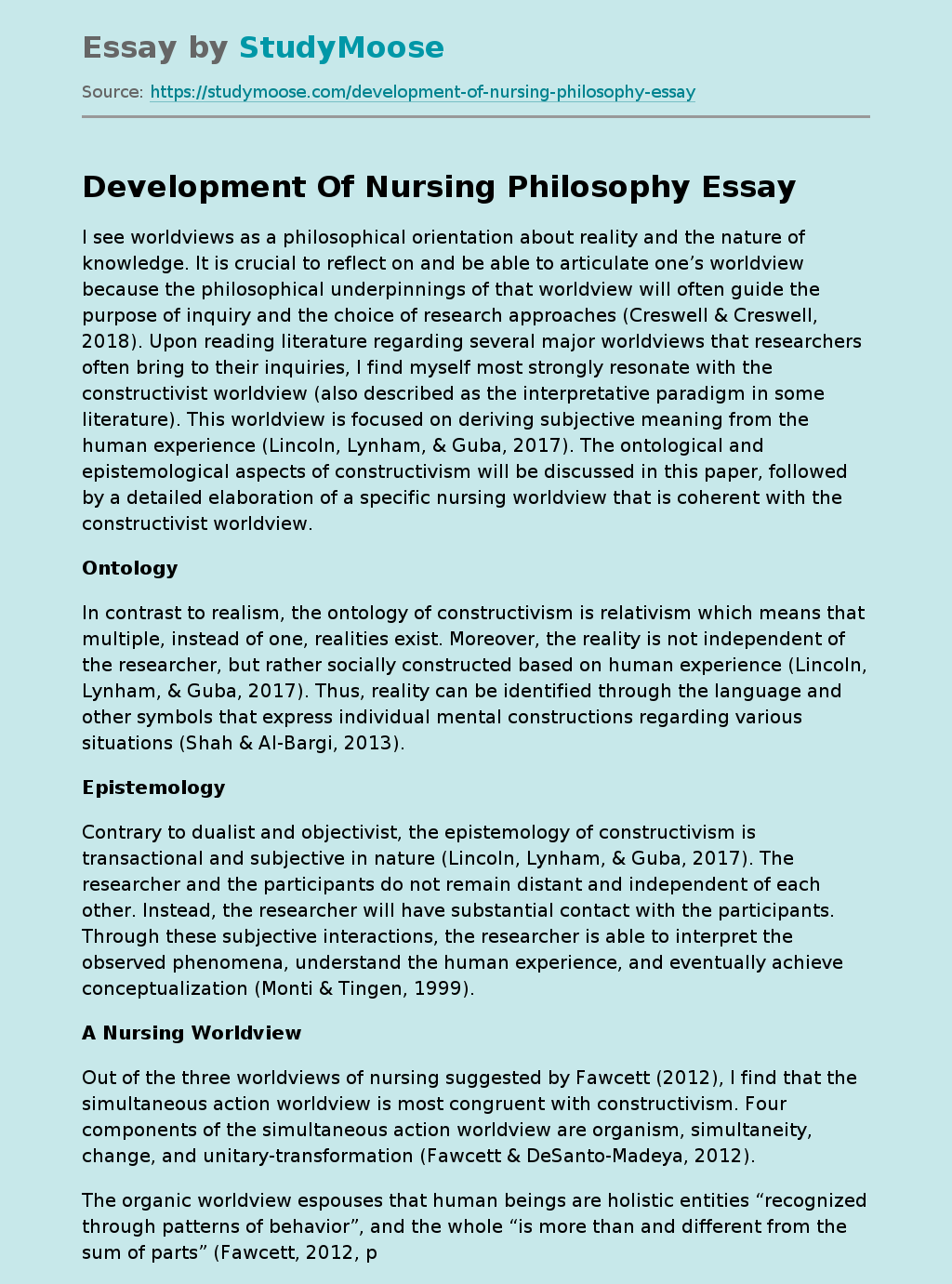