Desmond Mpilo Tutu (known fondly as the “Arch”) was born in Klerksdorp on 7 October 1931. His father, Zachariah, who was educated at a Mission school, was the headmaster of a high school in Klerksdorp, a small town in the North West Province. His mother, Aletha Matlhare, was a domestic worker. At the age of twelve his family moved to Johannesburg. In 1945, he began his secondary school at Western High, a Government secondary school in the old Western Native Township, near Sophiatown. Around that time he was hospitalised for over a year with tuberculosis.

Don't use plagiarized sources. Get your custom essay on
“ Desmond Mpilo Tutu ”
Get custom paper
NEW! smart matching with writer

Although he had fallen behind at school owing to his illness, his principal took pity on him and allowed him to join the Matriculation class. Tutu later decided he wanted to follow his father’s example and become a teacher. In 1951, he enrolled at the Bantu Normal College, outside Pretoria, to study for a teacher’s diploma. In 1954, Tutu completed a teaching diploma from the Bantu Normal College and taught at his old school, Madipane High in Krugersdorp.

Proficient in: Fighting For Equal Rights

In 1955, he obtained a Bachelor of Arts degree from the University of South Africa (UNISA).

Tutu began teaching at Munsieville High School, where his father was still the headmaster. He is remembered as an inspiring teacher. But after three years of teaching, Tutu quit in protest at the deteriorating of Black education that resulted from the implementation of the Bantu Education Act of 1953. During his stay in Munsieville, Tutu thought hard about joining the priesthood. He offered himself to the Bishop of Johannesburg to become a priest.

Later, Tutu returned to South Africa in 1975 to take up a post as the first Black Anglican Dean of Johannesburg and the Rector of St Mary’s Cathedral Parish in Johannesburg.

Here he brought about radical changes, often to the chagrin of some his White parishioners. On the 16th of June 1976, Soweto students began a wide scale rebellion against being forced to accept Afrikaans as the language of instruction and the inferior education they were forced to endure. At the time, Tutu was the Vicar General when he received news of the police shooting and killing students. He spent the day engaged with students and parents. Tutu played a significant role in the Soweto Parents Crisis Committee which was set up in the aftermath of the killings.

By 1978, in the wake of the 1976 Soweto uprising, South Africa was in turmoil, and Tutu was persuaded to take up the post of General Secretary of the South African Council of Churches (SACC). It was in this position that he became both a national and international figure. Tutu pursued these goals with vigour and commitment. Under his guidance, the SACC became an important institution in South African spiritual and political life, challenging white society and the government and affording assistance to the victims of apartheid.

Tutu became heavily embroiled in controversy as he spoke out against the injustices of the apartheid system. For several years he was denied a passport to travel abroad as the South African Government continued to persecute him. In September 1982, after eighteen months without a passport, he was issued with a limited ‘travel document’ which allowed him and his wife to travel to America. There he was able to educate Americans about Nelson Mandela and Oliver Tambo, whom most Americans were ignorant of.

In 1983 he was elected Patron of the United Democratic Front (UDF), one of the most important non-racial anti-apartheid organisations. His community activism was complemented by that of his wife Leah. She campaigned the cause for better working conditions for domestic workers in South Africa. She helped found the South African Domestic Workers Association. In 1984, while in America, Tutu learnt that he was awarded the Noble Peace Pride award for his untiring effort in calling for an end to White minority rule in South Africa, the unbanning of liberation organisations and the release of political prisoners.

While several Black South Africans celebrated this prestigious award, the Government was silent, not even congratulating Tutu on his achievement. He urged foreign disinvestment in South Africa as a way to pressurise the government to dismantle apartheid, and was the focus of harassment by the police as a result. Like murdered activist Steve Biko, he also urged civil disobedience. It led to events such as the “purple rain” protest in Cape Town in 1989, where protesters were sprayed with purple dye to identify them to the police for arrest later. nnounced plans to release Nelson Mandela from prison, which took place on the 11th of February. Nelson Mandela subsequently went on to become South Africa’s first democratically elected president on the 27th of April 1994. The process was not without violenceon the 19th of April 1993, Chris Hani, leader of the South African Communist Party, was murdered by right-wingers.

At Hani’s emotionally charged funeral, Tutu urged the crowd of around 120 000 to work peacefully together and end apartheid. He called on the mourners to chant with him: “We will be Free! , “All of us! ”, “Black and White together! ” He told the throng: “We are the rainbow people of God! We are unstoppable! Nobody can stop us on our march to victory! No one, no guns, nothing! Nothing will stop us, for we are moving to freedom! We are moving to freedom and nobody can stop us! For God is on our side! ” He retired from the Church in 1996 to focus solely on the TRC, and was later named Archbishop Emeritus. In 1997 he was diagnosed with prostate cancer and underwent successful treatment in the US.

Moreover, Tutu continues to speak out on moral and political issues affecting South Africa and other countries. He has criticised the government and the ruling party when he felt that it had fallen short of the democratic ideals which many people fought for. Though his vigorous advocacy of social justice once rendered him a controversial figure, today Archbishop Tutu is regarded as an elder world statesman with a major role to play in reconciliation, and as a leading moral voice.

He has become an icon of hope far beyond the Church and Southern Africa. Tutu is chairman of the Elders, an independent group of influential people chosen for their outstanding integrity, courage and proven ability to tackle some of the world’s toughest problems. Tutu officially retired from public life on the 7th of October 2010. However, he continues with his involvement with the Elders and his support of the Desmond Tutu Peace Centre and the AIDS campaign. 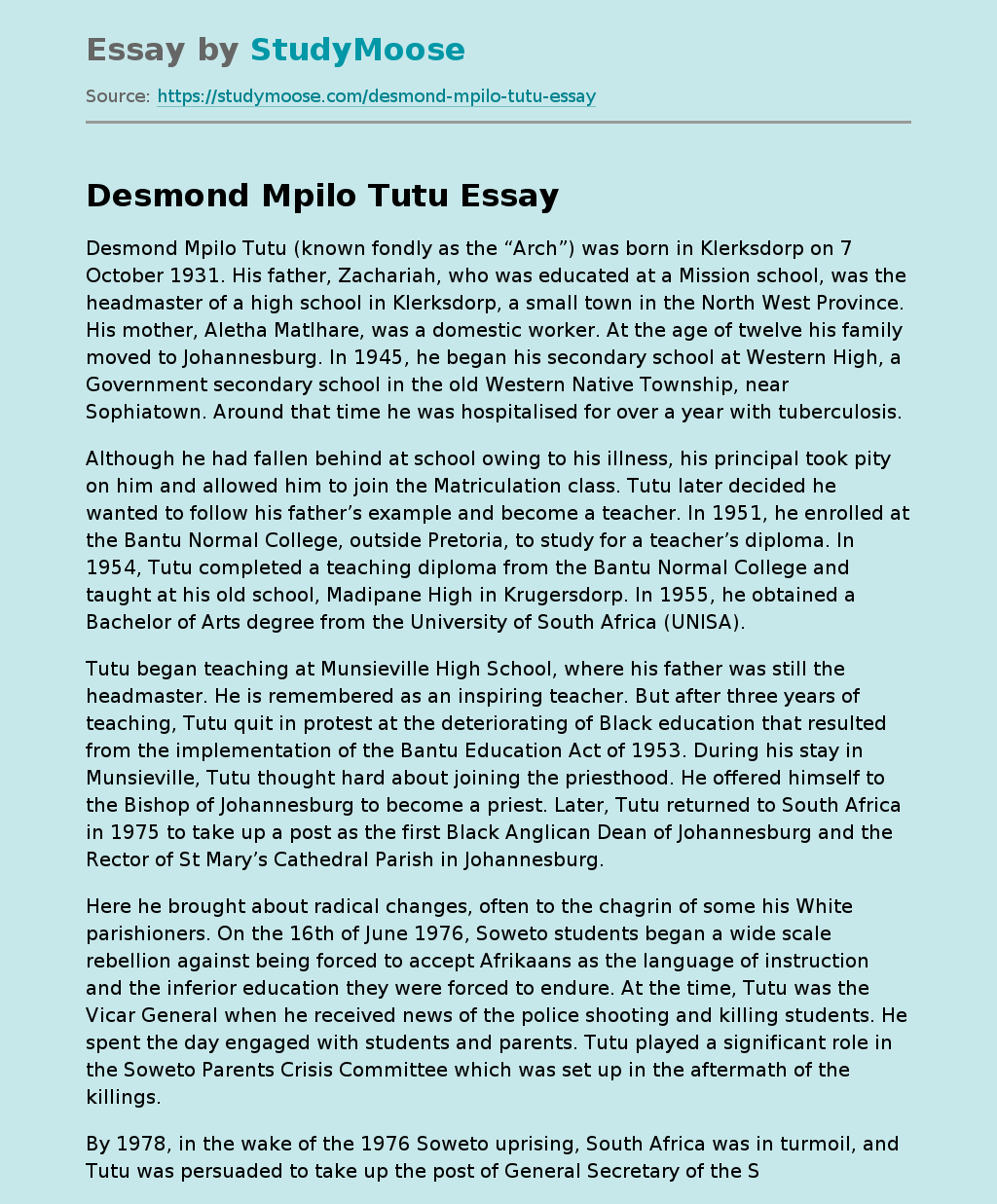