Kate Chopin, author of Desiree’s Baby, has written over 100 stories in her lifetime. She was raised only by her mother and that side of her family in in St. Louis, Missouri. Though she has written numerous stories Desiree’s Baby “the most frequently anthologized of all her short stories” (Cruz). The story is set in a place that is probably much like the small town where she lived out her married life in Loiusiana. The story has a small cast consisting of Desiree, her mom, Armand, and their child.

Don't use plagiarized sources. Get your custom essay on
“ Desiree’s Baby ”
Get custom paper
NEW! smart matching with writer

The author uses literary elements such as situational irony, internal conflict, and mystery to illustrate her theme of the impermanence of one’s perception of their identity through their circumstances and relationships. Throughout the story Chopin constantly changes how it is that her characters perceive their identity to be. For Desiree, her identity is begun unknown to anyone. Through her “adoption” she is given one then through marriage yet another one.

It was at the discovery of the baby’s race that her marital identity was taken from her and it was then that she finally gave herself an identity though it wasn’t a very positive one.

Chopin also changed Armand’s identity. Throughout the story he always appears steady and strong of will and identity but it is at the very end that we discover he is the one who’s identity was least known to anyone. Chopin’s use of situational irony holds the most dramatic impact on the storyline and its characters.

“’It means,” he answered lightly, “that the child is not white; it means that you are not white. ’” (Chopin 308). At this point Desiree has just recognized the African ancestry in her son.

The irony only appears in the end when the reader discovers that it is not Desiree who brought this particular ancestry into the bloodline but rather Armand. “’…our dear Armand will never know that his mother…belongs to the race that is cursed with the brand of slavery. ’” (Chopin 310). Chopin uses situational irony in her characters in quite a remarkable way. It is at the exact moment and in the revelation of Armand’s ancestry that she shows that not only does he possess African ancestry but that Desiree does not though by this point it is too late for Desiree and her child. [There are] clear dualities: master over slave, white over black, and man over woman. ” (Peel). Armand is “[c]onfident that he is a white, a male, and a master. ” (Peel). The story shows Armand not to be fully white. This would pull him down to the same level as his slaves. He would no longer feel like a master and he would no longer have a woman for which he could be a man over. Armand had officially lost every sense of identity he had had before. “Chopin creates…characters struggling to fulfill the needs for self-knowledge, for love, and especially for a place in life where they can feel they belong” (Korb 79).

In the story Desiree struggles with who it is that she is constantly though she doesn’t show it quite as much. In general, she accepts whatever identity people tell her it is she ought to have but she is only so accepting because of her natural demure nature. One can assume how much she must have struggled with the true nature of her identity, the mystery behind it. In the end she takes her own life and by doing so she, for the first time, defined herself for herself. Meanwhile, Armand discovers his own identity and we can only imagine the struggle that must have ensued after that. The heroine of Chopin’s story is figured as a blank page, as a text to be written upon and read by men” (Miner 860). “Her decision to walk off into the bayou with her child, to certain death, shows her inability to forge an identity for herself” (Desiree 73).

As one can see, Desiree’s identity is what she bases her entire self-worth on. Not only the worth of her life but the life of her still newborn son. When her identity was taken from her it drove her over the edge to the point where she gave up on life as a whole and simply chose to end it. That her reaction to his rejection is so extreme demonstrates the depth of feeling she has regarding his love and her identity both being taken from her” (Desiree 73). The element that is not quite as prominent in Chopin’s writing is her use of mystery. “Desiree awoke one day to the conviction that there was something menacing her peace. It was at first too subtle to grasp. ” (Chopin 308). You can see Desiree fighting the questions in here mind here. “The circumstances of her childhood strip Desiree of any true identity of her own” (Desiree 72). “Some people thought…The prevailing belief was…” (Chopin 306).

The mystery behind Desiree’s identity was for some time the talk of the town. This shows that it wasn’t just Desiree but that everyone in this time period was vastly concerned with what one’s identity is. That it is something of great importance to nearly everyone, even those who it did not concern or affect. So the question becomes, why did no one ever question Armand’s identity? “[O]ld Monsieur Aubigny having married and buried his wife in France, and she having loved her own land too well ever to leave it” (Chopin 307). This shows that the mother of Armand herself is a mystery to everyone in the states.

This makes Armand’s ancestry a question in and of itself though no one questioned that it was anything aside from all white because everyone had known and loved his father. The entire story is filled with characters surrounded by mystery. Often, their mysterious origins weren’t questioned till later dates. Chopin shows how one’s identity can change and often does due to their circumstances using three main literary elements. “The passion awoke in him that day…swept along like an avalanche, or a prairie fire, or like anything that drives headlong over all obstacles” (Chopin 306).

Her use of irony can be shown in how she took away his “star-struck” love in Armand’s discovery of what he believed to be Desiree’s race. In her story she makes all her characters face some internal conflict, some question. “…striving to penetrate the threatening mist that she felt closing about her” (Chopin 308). In the end Chopin answers all of her mysteries. “Desiree and her child, both half-castes in a world where things are measured by black and white, find their final identities as tragic figures” (Desiree 79). 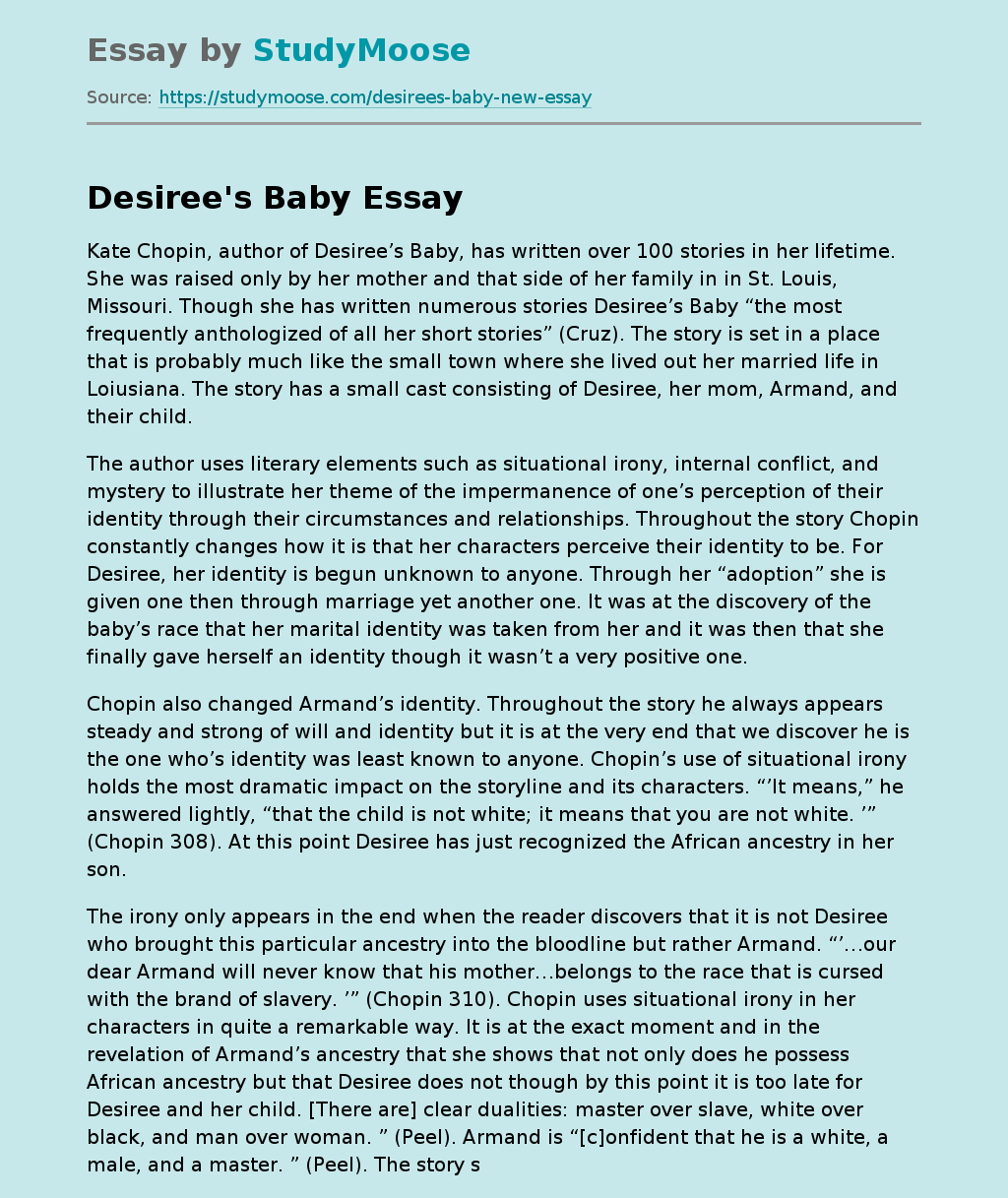