Descriptive writing- in a graveyard

At first they had been glad to find shelter in an old church, but now, as they walked slowly down the aisle they began to feel afraid. As it was spooky, dark and gloomy, old-fashioned and plain, unlike other churches they knew of it did not have colorful stained glass windows, a happy, bright atmosphere just an empty, sad sort of place with an overall feeling of being deserted with not a single person in sight for miles. which gave one the feeling that something was not quite right.

Don't use plagiarized sources. Get your custom essay on
“ Descriptive writing- in a graveyard  ”
Get custom paper
NEW! smart matching with writer

They began to play silly, childish pranks on each other, making up ghost stories, jumping out on each other from behind, playing in each others shadows, talking about getting hold of a luigi board to talk to their ancestral spirits and generally joking and frightening each other. Not really realizing how serious the consequences of their actions would be, or of course not having any clue about what sort of things they were about to witness.

Then came a sound, which really made their blood freeze. It came from somewhere high in the roof – a spine chilling, unearthly wail. The next minute an indistinct shape seemed to drift down from the ceiling towards the alter. At the same time a candle seemed to flair up and suddenly then flicker and die out as a faint aroma of incense drifted through the building.

Scarcely daring to breathe, they edged their way back towards the main door in which they had entered through, passing the tombs on which lay the eerie figures of knights carved in stone.

The gigantic, door gave a mournful groan as it slung open on its rusty hinges.

Outside the mist still blanketed everything. An owl hooted in the distant wood.

As they turned to break into a run, a bell tolled high in the church tower, yet it was a well known fact by everyone who lived in the village that no bell had hung there for over forty years. Suddenly they were startled as the bell began to chime…ding-dong, ding-dong, ding-dong.

Without a seconds pause they fled through the graveyard, stumbling as they went with there jaws dropped and their mouths wide open, with sheer shock and disbelieve at what they had just witnessed. Their faces were as white as death.

Their parents would never believe how they had got lost and found themselves in a churchyard. And how the three friends mysteriously ended up there when initially they were out on a late night trek on horseback [without their parents knowing] and how the clouds had given way to torential storms and how day light had soon gone and it had got dark very quickly, and they had taken cover in a spooky, deserted church. And they felt sure no one would believe what they had experienced and they truly believed know one ever would.

Descriptive writing- in a graveyard . (2020, Jun 01). Retrieved from https://studymoose.com/descriptive-writing-graveyard-new-essay 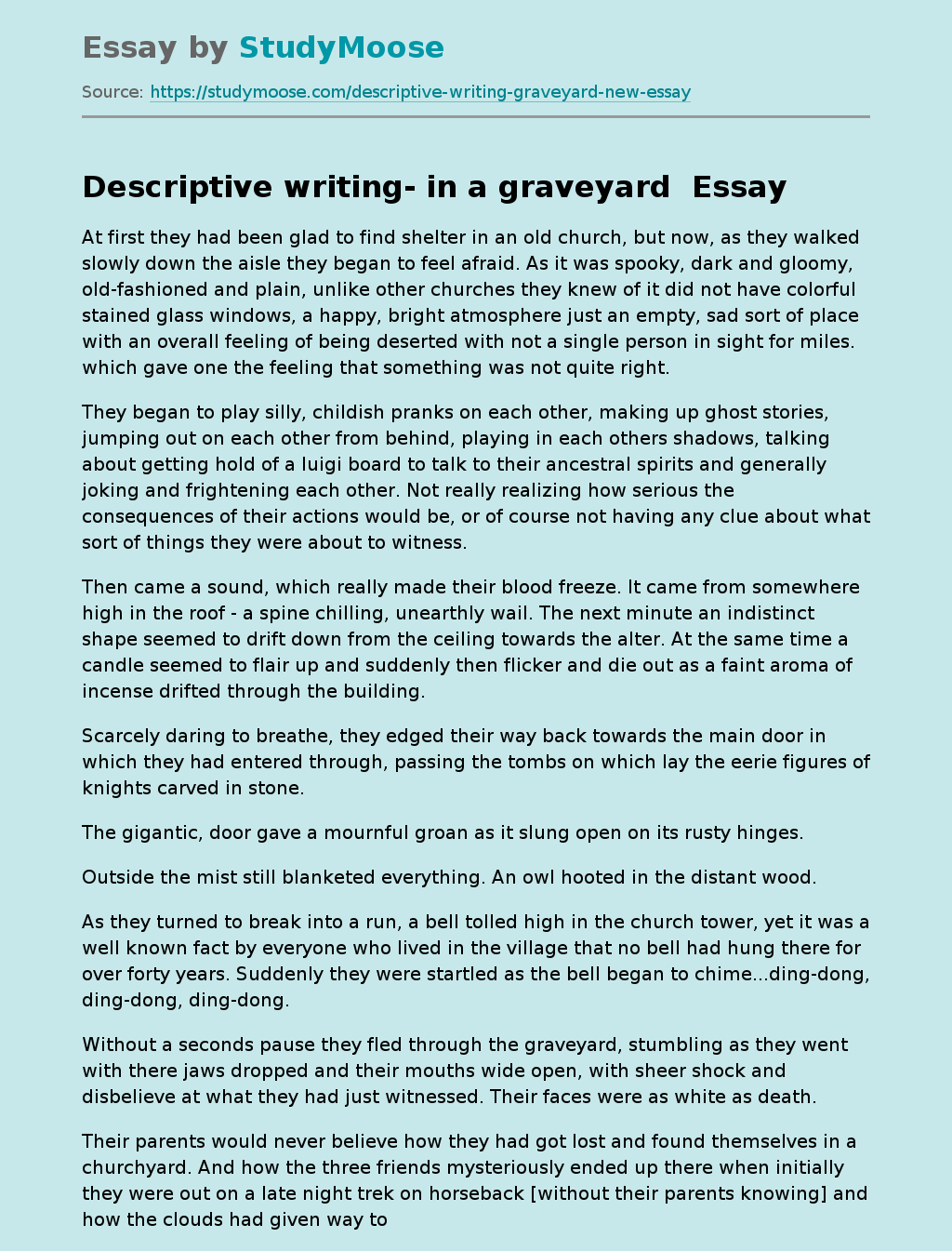