Descriptive VS. Narrative, You Decide

Many think that narrative and descriptive styles of writing are one in the same, but they are not. Although they complement each other for a complete story; you can successfully write using one style without the other. The authors Connell, C.M. & Sole, K. define narrative writing as, “Narration is storytelling from the perspective of a narrator, and the story may be true, false, imaginary, or a combination.” (2013, chapter 6.3). When you tell a story you want your readers to experience it through your words as if they were there when it happened.

Don't use plagiarized sources. Get your custom essay on
“ Descriptive VS. Narrative, You Decide ”
Get custom paper
NEW! smart matching with writer

Connell, C.M. & Sole, K. define descriptive writing as, “Description is a pattern of writing that can be defined as painting pictures with words.” (2013, chapter 6.4). A descriptive story leaves no detail unrevealed and appeals to all of your senses. When comparing Maya Angelou’s descriptive poem “Caged Bird” and Judy Brady’s narrative essay “I Want a Wife”, it is clear that there many similarities and differences between the two styles of writing.

However, because Maya Angelou’s poem has descriptive language that appeals to your five senses, specific detail descriptions and uses figurative language to compare the unfamiliar with something more familiar it makes it a superior piece of literature. In the narrative style essay written by Judy Brady (1971), “I Want a Wife”, she uses out right sarcasm and exaggeration with a slight humorous tone. This demonstrates her stance on the unrealistic demands that were placed on women in that era. She starts off her essay stating “I belong to that classification of people known as wives.

I am A Wife. And, not al-together incidentally, I am a mother” (1971). As if being a wife and a mother was almost an undesirable task to bear in life. I suppose that in the 1900 century it pretty much was to an extent.

The way Brady goes on to list the expected duties of her wife, makes her sound more like a servant than anything else. She even mentions her wife performing things like party catering, financially supporting the family and goes so far as to say, “I want a wife to go along when our family takes a vacation so that someone can continue to care for me and my children when I need a rest and change of scene” (1971). Brady’s narrative essay uses a block arrangement structure, with a priority style order. Brady (1971) begins her story by stating, “Not too long ago a male friend of mine appeared on the scene fresh from a recent divorce. He had one child, who is, of course, with his ex-wife. He is looking for another wife. As I thought about him while I was ironing one evening, it suddenly occurred to me that I, too, would like to have a wife. Why do I want a wife?” then she proceeds with an exaggerated list of tasks for her wife to fulfill.

From the wife working full time, to caring for her and her children, cooking, cleaning, counseling, playing, pleasing, catering parties, shopping, planning and entertaining, all while Brady just goes to school and lives a carefree and extremely selfish life. In the descriptive poem “Caged Bird”, written by Maya Angelou in 1983, she uses her talent of vivid and eloquent writing to express her stance on being African-American and living in the United States during segregation and the Civil Rights movement. Although she never actually mentions race in her poem the metaphors that she uses makes it clearly evident. Angelou starts her poem talking about a free bird and his arrogance referring to the Caucasian race. According to Angelou (1983) in “Caged Bird”, she starts off with a free bird riding the wind’s back, and he’s floating as long as the current will take him; when he “dips his wing in the orange sun rays” and has the audacity to claim the sky.

From this quote, you can see that the bird stalks down his narrow cage like a prisoner in a cell and the bird can seldom see through his bars of rage also refers to a prisoner in a cell. Much like how slaves were imprisoned on the plantations in the south. On the other hand, the narrative essay “I Want a Wife” does not rely on fugitive language; instead it just uses concrete language without the extra detail that appeals to the five senses. Another way descriptive writing is different from narrative writing is the use of specific detail description. It is clearly visible in the fourth stanza of “Caged Bird”. Angelou (1983) writes, “The free bird thinks of another breeze and the trade winds soft through the sighing trees  and the fat worms waiting on a dawn bright lawn  and he names the sky his own.”  In her description of the trade winds soft through the sighing trees and the fat worm on the dawn bright lawn.

However, in “I Want a Wife” Brady (1971) merely writes, but without detail. Instead she says, “I want a wife who is a good nurturing attendant to my children, who arranges for their schooling, makes sure that they have an adequate social life with their peers, takes them to the park, the zoo, etc.” As you see Brady doesn’t use specific detail in her writing just simple concrete words. Another highlight to Angelou’s writing style was her use of alliteration; which is defined in Essentials for College Writing as “repetition of initial consonants in words in a series” Connell, C.M. & Sole, K. (2013). An example of her alliteration would be, “The free bird thinks of another breeze and the trade winds soft through the sighing trees and the fat worms waiting on a dawn bright lawn  and he names the sky his own. But a caged bird stands on the grave of dreams  his shadow shouts on a nightmare scream  his wings are clipped and his feet are tied  so he opens his throat to sing.

In conclusion, when considering which of the two forms of literature was superior to the other, not just for personal preference. I would have to deem the descriptive style of Angelou’s writing to be a better overall polished piece of work. Not only does it provide extensive language to portray its message with detail to the most important parts of its story. Like bringing the characters to life and shining light on important social issues, but also submitting a few subtle details in the technique used to compose the text. Like alliteration and metaphors so that parts of her short poem stick out and stay with you more so than others. I believe the more magnificent and detailed the picture is that your words paint, the more impact it will have on its audience. This is something that she was well aware of, so the way Maya Angelou selected her words helped to give her audience a sense of pathos. It also helped to shine light once again on the views and opinions she felt so strongly about in society.

Descriptive VS. Narrative, You Decide. (2016, Apr 01). Retrieved from https://studymoose.com/descriptive-vs-narrative-you-decide-essay 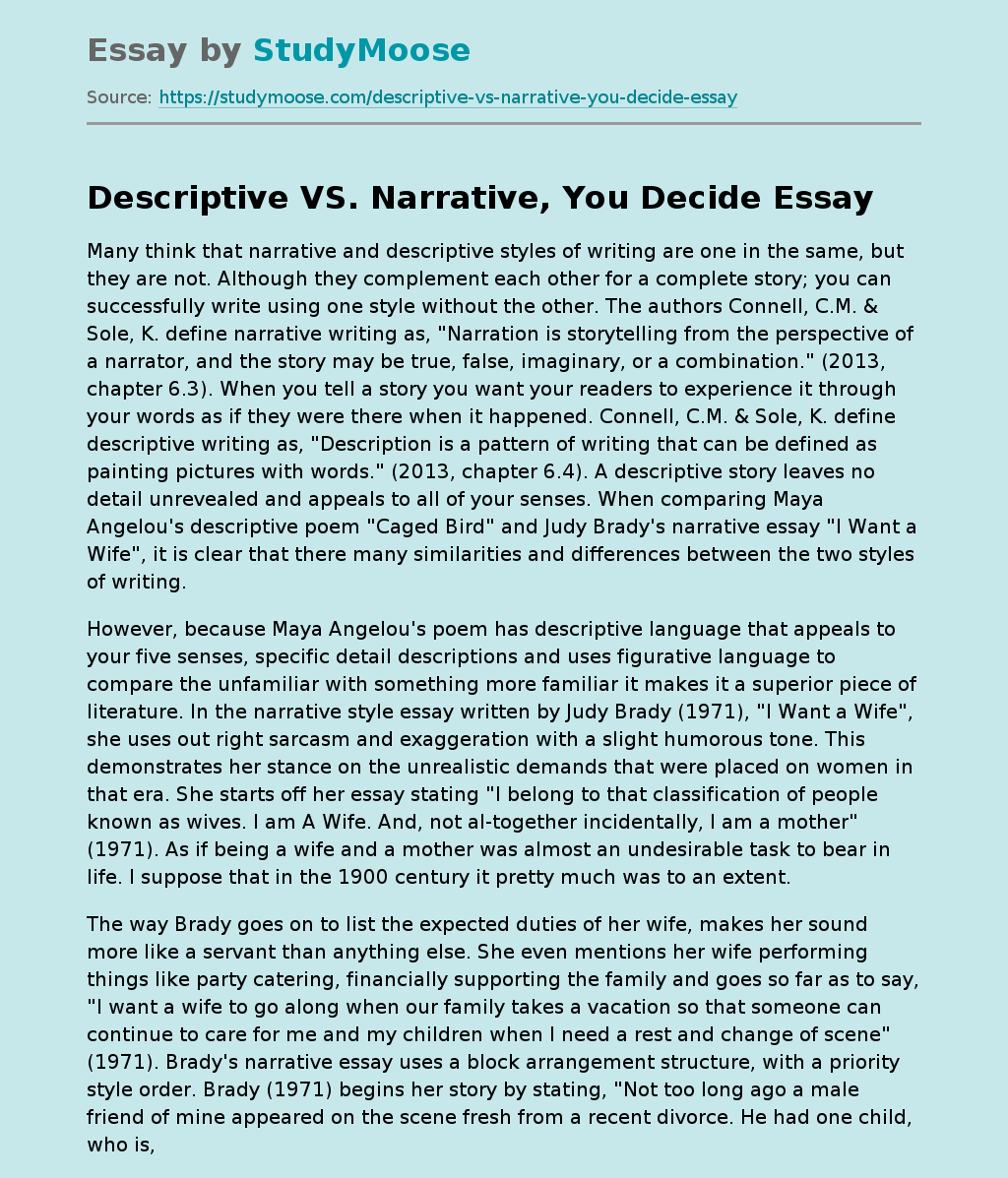