Depression and Suicide in Late Adulthood

Reaching late adulthood is a stage in life that individuals often hope to be able to reach. Life starts from the moment of conception and goes on until we all reach the unavoidable stage of death. Individuals all deal with life in many different ways. An adult that has gone through life completing most of the tasks that he/she wanted to complete can go into the stage of late adulthood generally happy.  People in late adulthood often face many health problems.

Don't use plagiarized sources. Get your custom essay on
“ Depression and Suicide in Late Adulthood ”
Get custom paper
NEW! smart matching with writer

I have researched three sites that identify the current issues that place significance on late adulthood. Current issues consist of depression and suicide, health care issues as well as a decline in a physical manner and cognitive development.  Late adulthood is generally considered to begin approximately around the age of 65. Erik Erikson suggests that at this time it is important to find meaning and satisfaction in life rather than to become bitter and disillusioned. That is, to resolve the conflict of integrity versus despair.

It has been estimated that by the year 2030, Americans over 65 will make up 20% of the population. Despite the problems associated with longevity, studies of people in their 70s have shown that growing old is not necessarily synonymous with substantial mental or physical deterioration. Many older people are happy and engaged in a variety of activities.

However, it still remains that according to the American Psychological Association depression and suicide are a significant public health issues for older adults. Depression is one of the most common mental disorders experienced by elders, but fortunately it is treatable by a variety of means.

Currently older adults in the United States succumb to more minor symptoms of depression at a higher then that of younger adults. Late adults in the Baby Boomer generation seem to be displaying depressive disorders at a significantly higher rate than previous groups; this trend displays a greater incidence of depression.   Depression is not only a prevalent disorder but is also a pervasive problem. Depressed older adults, like younger persons, tend to use health services at high rates, engage in poorer health behaviors, and evidence what is known as “excess disability.” Depression is also associated with suicide. Older adults have the highest rates of suicide of any age group, and this is particularly pronounced among men.  Physical changes, people typically reach the peak of their physical strength and endurance during there twenties and then gradually decline. In later adulthood, a variety of physiological changes may occur, including some degree of atrophy of the brain and a decrease in the rate of neural processes. Bone mass diminishes, especially among women, leading to bone density disorders such as osteoporosis. Muscles become weaker unless exercise programs are followed. You become less flexible and hair loss occurs in both sexes.

As people live longer issues of quality of life take on greater importance. Many older Americans suffer chronic health problems that limit their ability to enjoy their later years. These conditions often lead to serious physical limitations that have a major impact on an individual’s ability to live independently.The most common chronic health problem among older adults is arthritis. Nationally, among persons aged 70 or older, 50% of men and 64% of women reported having arthritis (Federal Interagency Forum on Aging Related Statistics, 2000). In Texas, the percentage is virtually the same – 51.3% of persons 65 and older report that they have some form of chronic joint symptoms (Texas Department of Health, 1999). Arthritis can be a crippling and painful disease that makes it difficult for older adults to perform even the most basic Adult Living Skills. End result is lost of mobility and disability. Adjustment is a part of life. The study of cognitive changes in the older population is complex. Response speeds have been reported to decline; some researchers believe that age‐related decrease in working memory is the crucial factor underlying poorer performance by the elderly on cognitive tasks.

Intellectual changes in late adulthood , it do not always result in reduction of ability. While fluid intelligence (the ability to see and to use patterns and relationships to solve problems) does decline in later years, crystallized intelligence (the ability to use accumulated information to solve problems and make decisions) has been shown to rise slightly over the entire life span. K. Warner Schaie and Sherry Willis reported that a decline in cognitive performance could be reversed in 40% to 60% of elderly people who were given remedial training. Dementia is usually responsible for cognitive defects seen in older people. These disorders, however, occur only in about 15% of people over 65. The leading cause of dementia in the United States is Alzheimer’s disease, a progressive, eventually fatal disease that begins with confusion and memory lapses and ends with the loss of ability to care for oneself. Being able to reach old age is a blessing and a gift. However, it can come with a lot adjustment as life takes it toll. As I have explained late adults can suffer from depression and suicide, health care issues, as well as a decline in physical and cognitive development. As young adults we most try to remain physically and mentally tough to slow these effects.

Depression and Suicide in Late Adulthood. (2016, Mar 10). Retrieved from https://studymoose.com/depression-and-suicide-in-late-adulthood-essay 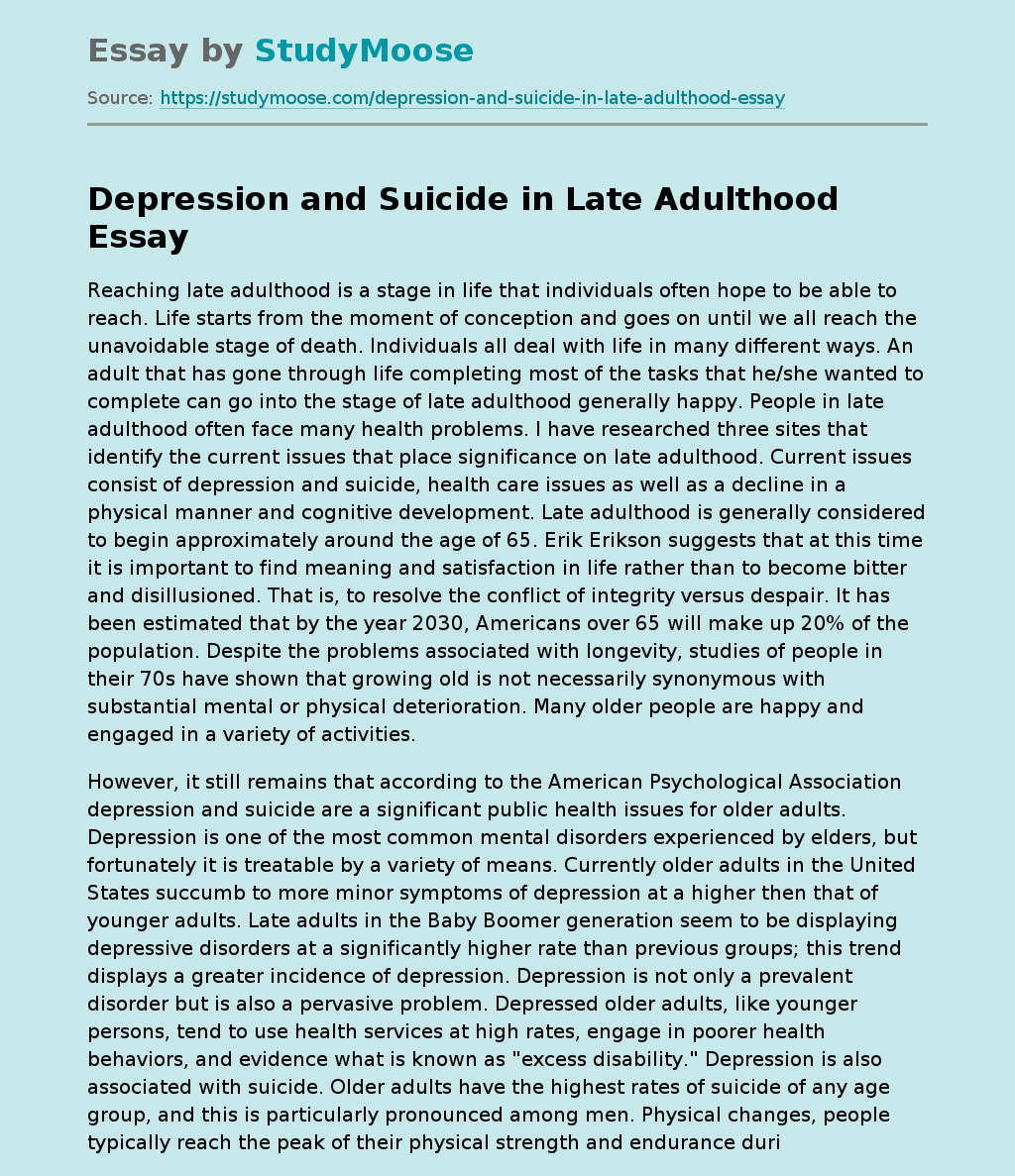