Deceit in Hunters in the Snow

Tobias Wolff’s “Hunters in the Snow” centers on the actions and personalities of Kenny, Frank and Tub as they embark on a hunting trip during the winter. Each character faces problems (in character or otherwise) which they attempt to cover up through deception – the central theme in this short story – in order to accept their respective actions. The consequences of these cover ups profoundly change the power of each character over another. Furthermore, the characters don’t realize how their lies influence others around them.

Don't use plagiarized sources. Get your custom essay on
“ Deceit in Hunters in the Snow ”
Get custom paper
NEW! smart matching with writer

Kenny is a quintessential bully. His need for power over the other two causes him to assert control of any action be it driving or asking for permission to hunt on private grounds. In truth, he doesn’t even wish to ask for permission but is pressured by Frank to do so. Kenny’s seemingly flippant mannerisms also follow from his desire to be the alpha-male. He insults and mercilessly teases Frank and Tub about their insecurities.

He pretends to desire to run over Tub after appearing an hour late and immediately silences any objection from Tub. However, he neither realizes how far he is pushing Tub nor the peril he is in. His stupid actions leading up to and after the murder of the old dog finally push Tub, who legitimately fears for his life, to retaliate. This immediately puts Kenny’s life at the hands of his bully victims and leaves a power vacuum to be filled.

Tub’s main problem is his denial of the poor eating habits that he has.

He adamantly tries to convince others that his problem is due to his glans despite acutely knowing that he gorges himself on unhealthy foods in solitude. The insecurity he feels about being found out causes him to become easily manipulated and bullied by Frank and Kenny. Moreover, the retaliation against Kenny only adds to the insecurity Tub has and he immediately searches for approval and protection against the consequence of shooting Kenny.

Frank fills in this vacuum and manipulates Tub into siding with him. Frank himself faces the issue of adultery. His lust for another woman causes him to deceive himself into believing that this new female is the love of his life despite a small part of his conscience stating otherwise. He even goes as far as to perverse the beliefs of that small part by asserting that his reluctance is only due to the good that his wife had done him and the kids they had. Frank’s self-deception inadvertently acts on Tub’s insecurities, prompting Tub to open up about his problems to Frank. By deceiving himself to accept his adultery, Frank pushes Tub to accept the eating problems that Tub has by giving in to Tub’s urges. Frank is unaware that his acceptance of adultery has already influenced Tub to succumb to Tub’s desires (shown by the fact that Tub decides to open up to Frank).

Each character has major issues that need to be corrected but prefer to deceive themselves and others than accept the truth and work towards correction. As such, Kenny lies in mortal peril, Frank gains newfound power in the group and over Tub, and Tub remains submissive to Frank’s wishes. Moreover, the newfound confidence in Frank leads him to ignore common sense in going back to retrieve vital directions to the hospital. The futures of these three characters is left hanging, however it is clear that the ending has each one moving down separate and erroneous paths.

Deceit in Hunters in the Snow. (2017, Feb 11). Retrieved from http://studymoose.com/deceit-in-hunters-in-the-snow-essay 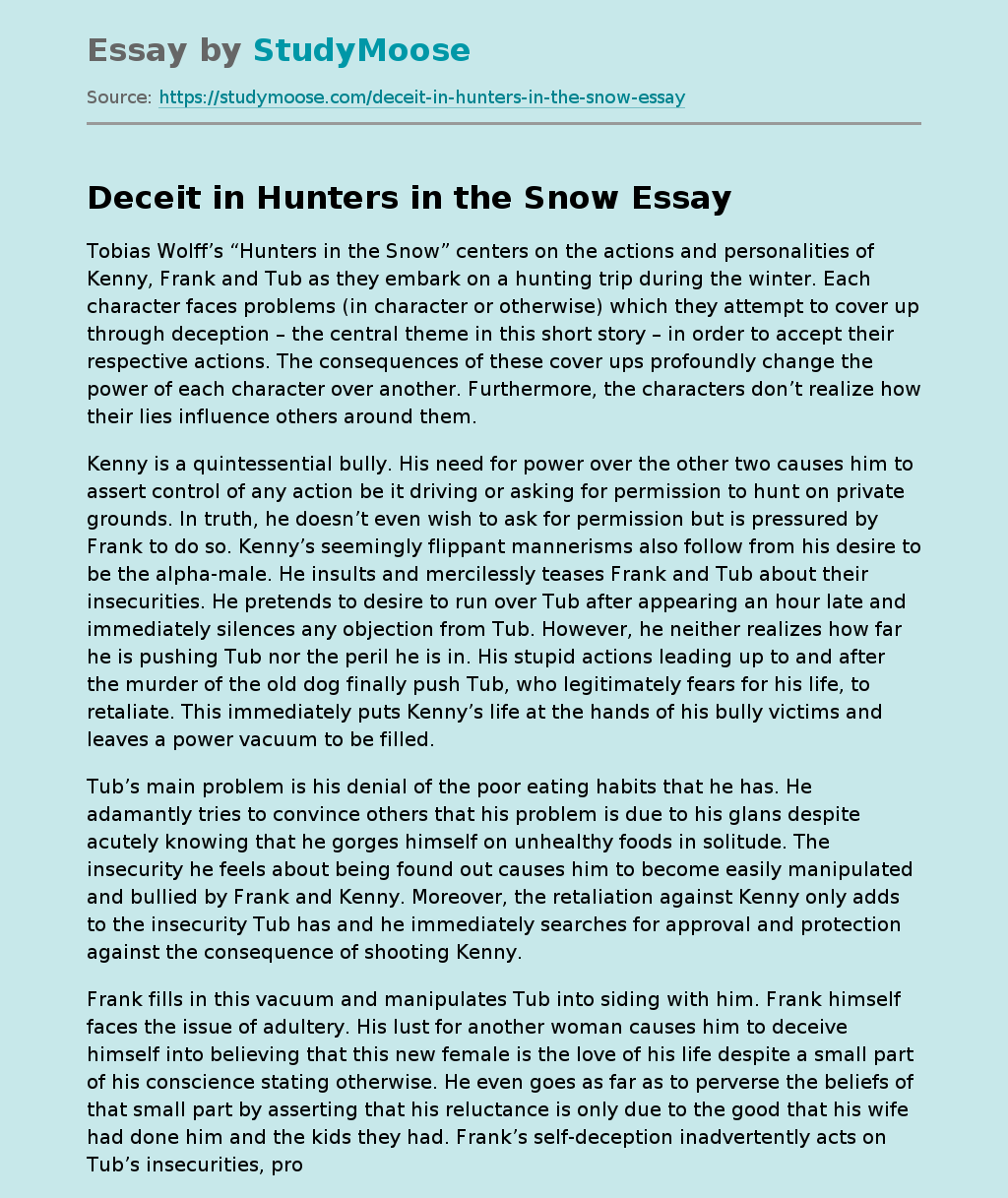