In the contemporary world the idea of removal of an entire people from its native land would sound wickedly and would perhaps be considered a genocide, yet in the XIX century this idea was quite permissible and corresponded to the ruling concept of civilized nations which were to rule those uncivilized and determine their existence. Therefore, in our estimation of pro and contra Indian removal arguments I shall attempt to evaluate the named arguments first and foremost from the point of view of the time and base my conclusions on such evaluation.

Don't use plagiarized sources. Get your custom essay on
“ Debate on Indian Removal ”
Get custom paper
NEW! smart matching with writer

The first argument proposed by Andrew Jackson to the Congress in 1829 is that that no new state may be established without consent of the people of that state, and since Indians are living on the territory of existing states and do not constitute a majority, they may not establish their own government and have to obey the laws of the state or immigrate. A harsher version of the argument is provided in the North American Review, January 1830, blaming that Indians are barbarous people “incapable of sustaining any other relation with the whites, than that of dependence and pupilage.

” Francis J. Grund is even more acrid, as he claims Indian’s cruelty towards the Founding Fathers. A counterargument can be found in the “Memorial of the Cherokee Indians”, published in the Weekly Register vol. 38, and it is that a white man is a ruler of the land, and the red man is weak, yet there were times when whites were week and reds were strong, and the whites received warm welcome from the Indians.

Also the Indians argued that previous treaties guaranteed their rights to land.

The situation with the Indians is similar to the one with the colonists before the Revolution. The colonists appeared to be weak and Britain was strong, yet the colonists were able to gain their independence by force. However, the Indians were unable to win the war and they had to obey those who are strong. Therefore, the US Government argument was nothing but a sword law, not a just law. This is well confirmed by the Decision of the U. S. Supreme Court in Worcester v.

The second pro argument proposed by Andrew Jackson in 1830 were advantages of immigration both for the whites and for Indians. For the US government is was an opportunity to protect the frontiers, for the states of Mississippi and Alabama these were new territories and opportunities for development, and for the Indians, under Jackson, it was an ability not to have contacts with the civilized people, follow their customs and live under the government supervision, gradually becoming a civilized community.

A counterargument of the Indians is explained in the mentioned Memorial, as well as in the article published in the North American Review, October 1830 where they claim their right to stay on their land and continue their traditional life same as any nation has title over its land. In fact, we once more face the sword law: the Government determined what is “civilized” and what is “law” and the Indians had to obey or disappear.

Another Indian argument may be found in the letter from John Ross: the Government was just willing to get rid of the Indians. This is an argument with no counterargument. Government’s desire to make away with the Indians was undisputable. Concluding my analysis I have to recognize that the arguments of the Indians look stronger even for the XIX century. An independent international tribunal of the time would perhaps take their side. Yet there was no such tribunal, but only the will of the Government which caused Indians to be removed. 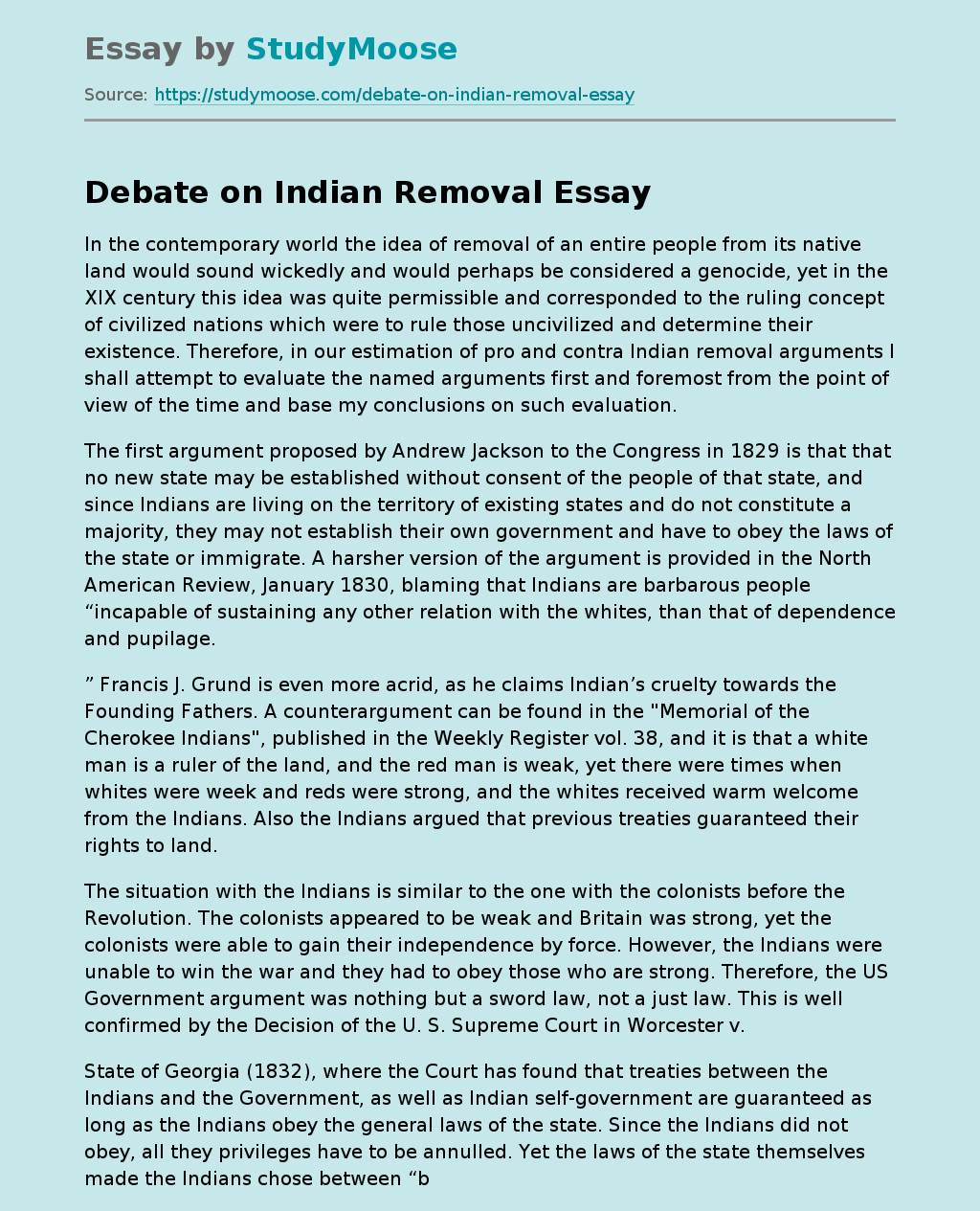