A unique part of the population in the world today consists of deaf people,children and adults. These people are the only ones that can understand what it is like to grow up and experience a completely deaf life. Since they rely so much more on vision than on hearing that they would communicate most readily in a natural signed language (Clason), they consider themselves a language minority and not a group of men and women that share and cope with the same disability.

Don't use plagiarized sources. Get your custom essay on
“ Deaf Community ”
Get custom paper
NEW! smart matching with writer

They call this minority Deaf culture. This assumption that they are a minority is dangerous and one that could deem a child’s future more difficult and less prosperous than need be. This raises the question of who’s to make the decision for a child to get a cochlear implant and is this decision being made with the child’s future in consideration or the parents’?The invention of cochlear implants and the development of its technologies has brought up a solution that is shockingly successful.

She attended school with other hearing children, and despite her situation, she received a warm welcome from her peers. Her parents are hearing andthe implant gave them the same ability to communicate with their child that deaf parents fear will be taken away from them if their child received the same implant (Praderio).

Tucker believes that deaf parents strongly desire to have deaf children, who will be a part of their parents’ deaf culture. It seems absurd to think that a child with a cochlear implant would ever lose the desire to communicate with deaf parents. Praderio wrote about another girl in her article who received the cochlear implant having both of parents deaf. The girl spoke adamantly about her ability to hear the sounds around her and all three of them couldn’t have been happier with the results of the surgery. Her lack of being able to speak to her parents verbally at home hindered her speaking ability, but her parents were still extremely proud of the opportunities they provided for their daughter. By simply being able to hear, her potential for a successful career had skyrocketed.

Peter Artinian, a deaf father who worked a cubicle job on Wall Street was debating getting an implant for his daughter. According to Praderio, his job became difficult many times because of his deafness. He was determined that he had no potential in climbing the corporate ladder into management because, although he was extremely successful despite having a hearing disability, it is difficult to imagine anyone who cannot speak on the telephone being able to manage a company on Wall Street. The benefits of receiving a cochlear implant and being able to hear are obvious, but the arguments against it are not so clear. Those that oppose cochlear implants seem to be more afraid of the disintegration of Deaf Culture rather than the potential damage of performing such an invasive surgery on a small child. That concern does speak well for the rate of physically successful surgeries; However, it also raises the question as to why an implant should be considered the device that lead to the end of the Deaf community.

Clason believes that the Deafculture seems to be at odds with them because its cultural construction of the reality of deaf children is based on the children’s potential for sharing the language and culture of the deaf- world and identifying with it. There is a legitimate concern that children of deaf parents that do receive the implant will separate him/herself from the world they were born into. Based off of a study done at a leading deaf university called Gallaudet however, any separation that does occur seems to stem much more from the deaf population rather than the population with cochlear implants one. Tucker states that cochlear implants are frowned upon at Gallaudet and that implanted individuals who attend Gallaudet are usually pressured, often by their peers rather than the staff or faculty members, to remove them or at least not to wear their processors. A person with an implant who attends a deaf university is obviously not trying to sever ties with deafness, but those without cochlear implants seem very bitter nonetheless.

Many deaf people, Bill Boyle for example, have been extremely excited to have the opportunity to belong to both worlds, the deaf and the hearing. Boyle says that he is proud to be overcoming what was considered a severe handicap, proud to be part of the community as a whole, not a club’ of narrow minded people (Tucker).At the end of the day, the parents get the final decision on whether or not to allow their child to receive the cochlear implant. Yet, it is unethical and selfish to knowingly deprive a child of experiencing the things they naturally should; even if it is to invest in and protect their beliefs. Larry G. Stewart, a leading member of the signing deaf community, believes that there is a huge difference between a cultural minority and the deaf minority. He observed that deaf culture was not discovered; it was created for political purposes. The term has yet to be satisfactorily defined (Tucker).

In a cultural minority, a child is expected to follow the footsteps of his/her parents, whether in ideology, religion, race or any combination. Likewise, it is also expected tohave all five of their senses. Being born deaf, by definition, means that a child lacks one of the five critical senses. Something as basic as having a conversation with a group of people does not exist for the deaf population. Simply because people have learned to cope and converse with one another through sign does not categorize the disability as a culture.This debate on cochlear implant is a very dynamic one. The implant itself is so powerful that the advocates for each side feel very strongly about its effects, whether it be positively or negatively. It would be wrong to assume that every patient would have the same positive response that Sharon had, but what is often overlooked is that it provided Sharon with the gift of hearing without separating her from her parents.

Honestly, the attitude of the parents is the only thing standing in the way of a deaf family with a hearing child. Many families who decided to get the cochlear implant were still united and couldn’t be more grateful for the all the opportunities they’ve opened up for their child. These parents still have their child and their connection to the Deaf World. They still have the uniqueness that comes with being deaf, but most importantly, they have the satisfaction that they have done everything in their power to give their child the best life they can have, with all five of their senses. Parents have always wanted to give their children the happiness that they didn’t have the luxury of having. These parents haven’t only given their children happiness, but also opened their children to a future with much more opportunities. What else could a parent ask for? 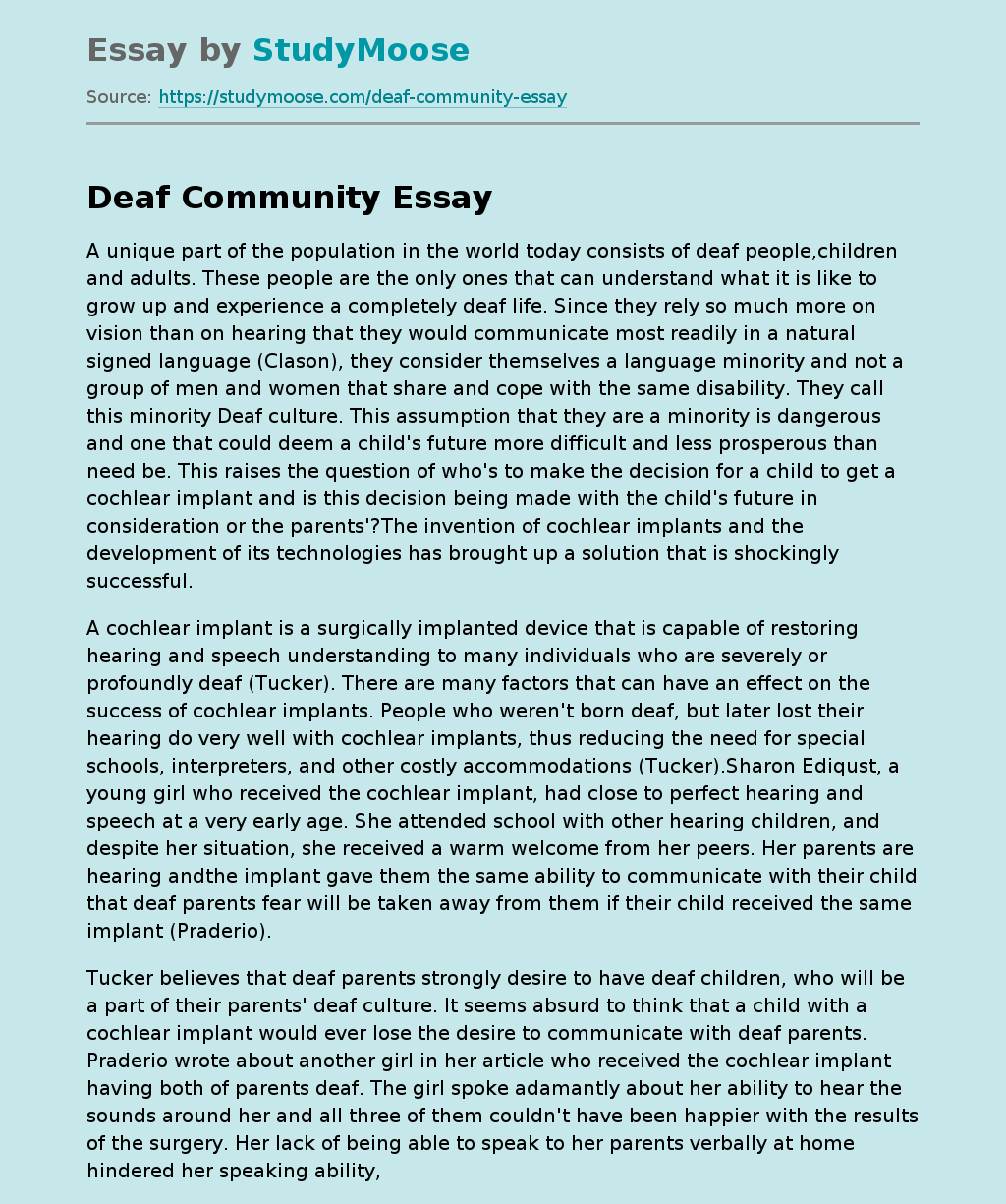