Damath comes from the Pinoys checker board game called “dama” and Mathematics. It blends local culture, education and digital technology that aim to make math teaching and learning child-friendly, challenging and interactive. DAMATH, a patent-pending mathematical board-game invented by five-time national awardees Jesus L. Huenda, is coined from the popular Filipino checkerboard game of dama, (or lady in Spanish) and mathematics. It started in a Sorsogon National High School class in Sorsogon, Philippines and its popularity spread quickly and resulted in the first national DAMATH competitions held at Legaspi City in 1980.

Don't use plagiarized sources.
Get Your Custom Essay on Damath Game Just from $13,9/Page

He initiated this competition with the support of the Science Foundation of the Philippines. He hopes to introduce DAMATH to secondary math teachers as part of a requirement of his work as PASMEP Fellow at Curtin University / WACAE, Western Australia.

Because in its unique way, Damath board game ushers the Filipino school kids into the new millennium by equipping them with competitive life-long learning for understanding and ICT-fluency skills.

When school children play Damath board game they also learn to explore, firm-up, deepen, and transfer to daily tasks the concepts of real numbers and its properties and operations. Moreover, it stimulates the children’s capability to think deeper through creative math storytelling, flowchart, concept map, tree diagram, picture riddle, haiku, cryptogram, secret code decoding, simulation, role playing, jingle or rap composing, reflection journal writing, and problem solving. This game is enjoyable and you can learn fast about computing and applying the different operations in Mathematics.

Objectives of the game “DAMATH”

To integrate the Filipino checkerboard game of dama into the teaching of mathematical concepts and skills. To encourage the utilization of recycled materials in constructing Damath board set (for classroom use only). To analyze Damath as a possible subject of mathematical investigations. iv. To enhance wholesome interpersonal relations among learners. To promote mathematical consciousness among, family members in particular and the community in general through the mathematics club’s community outreach Damath competitions. To promote awareness of girls in mathematics [as king is to the game of chess, so dama is to Damath].

History of the Game:

The game’s name, “Damath,” comes from the popular board game “dama” and “mathematics.” It was invented by Jesus L. Huenda, a teacher in Sorsogon, who had encountered problems in teaching math using traditional teaching methods. Inspired in part by an investigatory project called “Dama de Numero” submitted by a student in 1975, Huenda overhauled the game and introduced it to his class, who enjoyed playing. Damath grew in popularity so that by 1980, the first Damath tournament was held in Sorsogon. The next year, Huenda received a gold medallion from the late President Ferdinand Marcos for his contributions in the field of teaching mathematics. The game reached its peak popularity in the 1990s, when it made the rounds of several mathematics education conventions all over the world such as the 10th Conference of the Mathematical Association of Western Australia (MAWA), the UNESCO-ICT4E conference in Thailand, the SEAMEO RECSAM/SEAMEC conference in Malaysia, and the APEC Learning Community Builders (ALCoB) conference in Korea.

The Basic Game of the Play

As the name implies, the game is essentially the same as dama but with an added math twist: in order to win in Damath, a player must score the most points which are earned by “eating” the opponent’s pieces. In dama, the move ends there; in Damath, the player must solve the mathematical operation on the square in which the opponent’s piece is currently standing. The answer to that mathematical operation is the amount of points that the player will receive when s/he does “eat” the opponent’s piece. If the piece marked “-1” eats the piece marked “-3,” with “-3” standing on a multiplication square, the player must first solve the operation (-1 x -3 = 3) and will get three points. The game will go on until all pieces belonging to a player have been eaten and the scores computed. Because of the need to solve operations, players must list down all moves during the game so the moves can be reviewed, especially by the judges in a tournament setting. 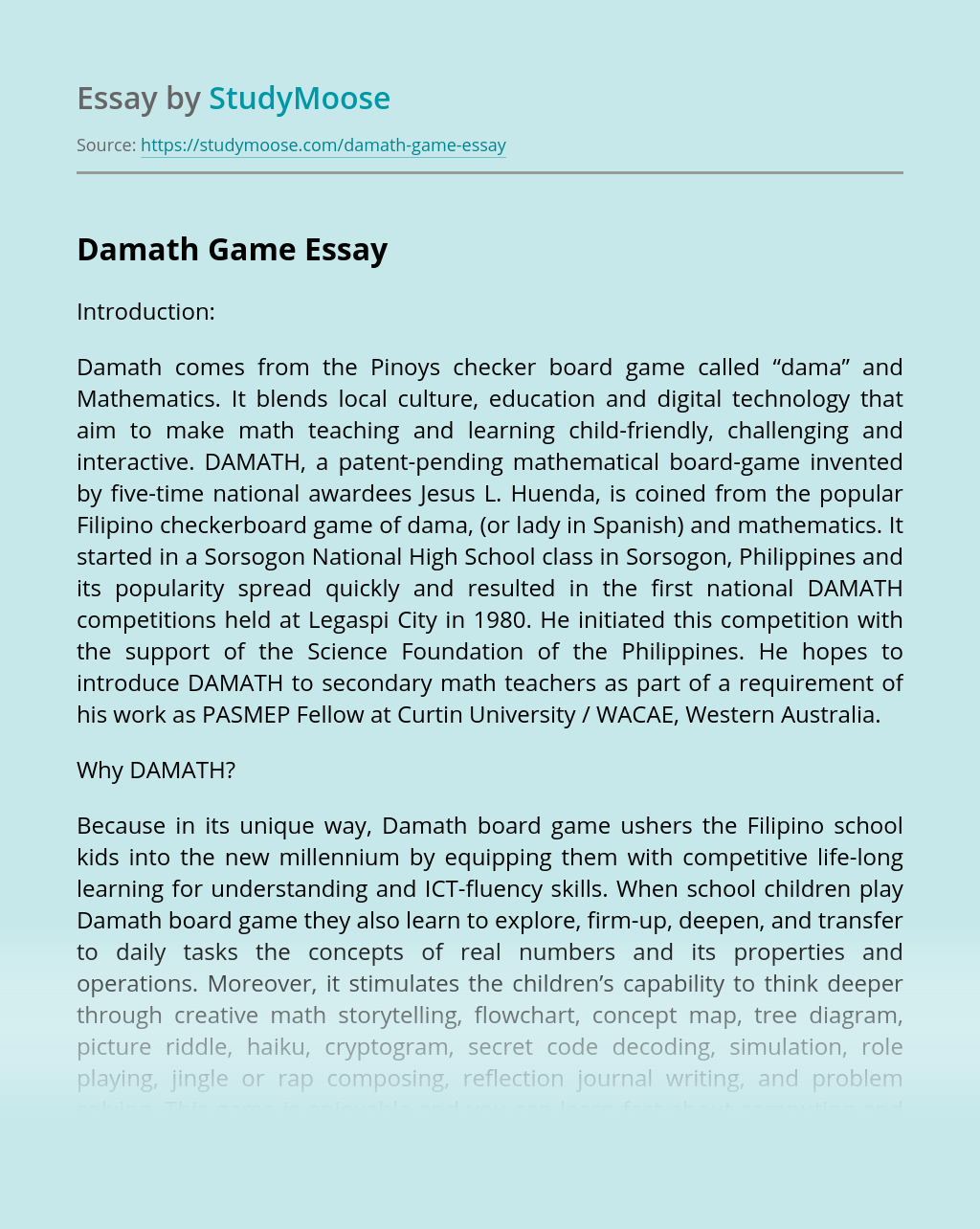 V-beltA V-belt is a mechanical linkage that has an isosceles trapezoid cross sectional shape. V-belts tend to be made of rubber, neoprene and urethane synthetic materials. They are typically used in cars to power things such as the fan they are used for this as they are easy to install and therefore are easy to...

Congratulations! Today is your day. You’re off to Great Places! You’re off and away.” These opening lines mark the commencement of the imaginative journey through the world created by Dr. Seuss in his picture book, “”Oh the Places You’ll go!” ,an allegory of Life and its possibilities. Robert Frost also explores the same concept in...

Get Essay
Teamwork Reflection and Assessment

The members in our teams are Bi, Xue, Qiaoyu and Chloe. Although we didn’t appoint a leader nominally, Chloe is the one who organized everything in our team. In this case, she is a true leader of us. Everybody in our team did a good job and the division of our job is showed as...

The book is more like two intertwining books than just a single book. It switches between two points of views, Ruth McBride and her son James McBride. In Ruth’s chapters, she chronicles out her life story beginning with her migrating to the United States when she was two years old. At a young age, Ruth’s...