Cultural Identity and Self Image in Short Stories

Identity is presented through the contents of belonging, values and beliefs. A person’s identity constantly changes and develops in time, depending on aspects of ethnicity, self-image and connection to a person or place. It is this which “builds” the qualities of identity. Prime examples of expressing the intricate nature of identity is clearly seen through Alice Pung’s short stories “The Face in the Mirror” and “Sticks and Stones and such-like” alongside Paul Keating’s memorable eulogy speech “The Unknown Soldier”.

Don't use plagiarized sources. Get your custom essay on
“ Cultural Identity and Self Image in Short Stories ”
Get custom paper
NEW! smart matching with writer

In Pung’s short story “The Face in the Mirror”, the author explores how ethnicity illustrates how a person’s relationship in the world creates a sense of identity. The idea is seen in the quote:

“For much of my childhood, my Asian-ness was pushed to a crevice in the back of my mind. My friends were white, my family was white, my world was white.”

The female protagonist conveys her cultural identity, through the use of a compound word, describing her “Asian-ness” persona as being part of a white family.

Pung also uses the technique of repetition, demonstrated through the word “white” coupled with the metaphor of “my world was white” to depict the fact that her whole lifestyle, revolves around “white” customs, as she neglects her original cultural origin being “made in Korea”. Through this, the audience are made to empathize for the protagonist as she is forced into neglecting her asian background. Hence, further reinforcing Pung’s concept of how ethnicity can be an aspect of identity.

Another way Pung demonstrated her concept of identity is through the use of the technique accumulation, in conjunction with rhetorical question in the short stories ‘Face in the Mirror’. For example. Accumulation is found where Pung lists “a name, a place, a date and temperature.” She follows this technique with the rhetorical question “but, what did it all mean?”. Pung uses these techniques to utilize the fact that the protagonist strives to find out more on her self, which illustrates how identity can be achieved through ones ethnicity.

In Pung’s short story ‘Sticks and stones and such like’, she establishes her concept of identity through the use of a series of language techniques throughout the text, one of these techniques, would be the use of a metaphor in conjunction with the use of accumulation. The author does this, to strongly utilize her concept. These techniques are found in the quote ‘All talking frantically and loudly in English, Hindi, Kannada, Konkani: Every sentence a masala of different vocabularies”. The metaphor being a ‘masala of different vocabularies’, and accumulation being the list of the different languages. The persona refers to the list of different languages as a ‘masala’, which in her culture means ‘a variety of different spices’. This is done to further reinforce the cultural gap, which conveys how the persona feels a disconnection of identity due to a different ethnicity. Therefore impacting her sense of identity.

In addition to ‘Stick’s and Stones and Such-like’, the author has further demonstrated her concept of identity by the use of language techniques describing the connection to the person and their self image. These techniques used by the author are allusion and short sentences, which is demonstrated in the quote, “Sticks and Stones and Such-like, I’ve been called a lot of things”. This allusion is is an expression which alludes to a different text, “Sticks and stones may break my bones but words will never hurt me”. This technique indicates the connection between their name and personal identity, although the technique of short sentences portrays the author’s intentions of rising above other people’s perceptions of identity through one’s name. Therefore, a sense of reassurance is achieved.

In the related text “Unknown Soldier” written by Paul Keating. The author uses a series of techniques in order to portray the concept of how a sense of identity can be reached through ones connection to a person or place.

Short sentences are being used in this text to provide an impacting atmosphere to the audience. This relates to identity placing the soldier within a group rather than being anonymous, as the title suggests. Throughout the first stanza, the composer has used repetition repeating the phrase, “we do not know” in regards to factors of family, religion and ethnicity which have been lost, showing that he was not only a soldier, but a man, creating a sense of identity. In regards to identity, it emphasis’ the several factors of shaping and changing who a person is.

The idea of self-image is seen in the quote, “Out of the war came a lesson…It was a lesson about ordinary people, and the lesson was that they were not ordinary”. Irony is seen in this quote, contradicting itself that the soldiers which fought in War were not like everyone else, rather being perceived of having a “heroic” status in other peoples eyes. The effect of this ironic statement allows the audience to contemplate the impact an individual has on their own self-image.

This shows the concept of self-understanding, as without a distinguished self-perception or image. The three texts analysed all share the themes of belonging, values and beliefs, showing that the aspects of ethnicity, relationships and self-image all aid in proving that who you see yourself as an individual can change and develop over time, establishing this through the use of various techniques.

Cultural Identity and Self Image in Short Stories. (2016, Dec 10). Retrieved from https://studymoose.com/cultural-identity-and-self-image-in-short-stories-essay 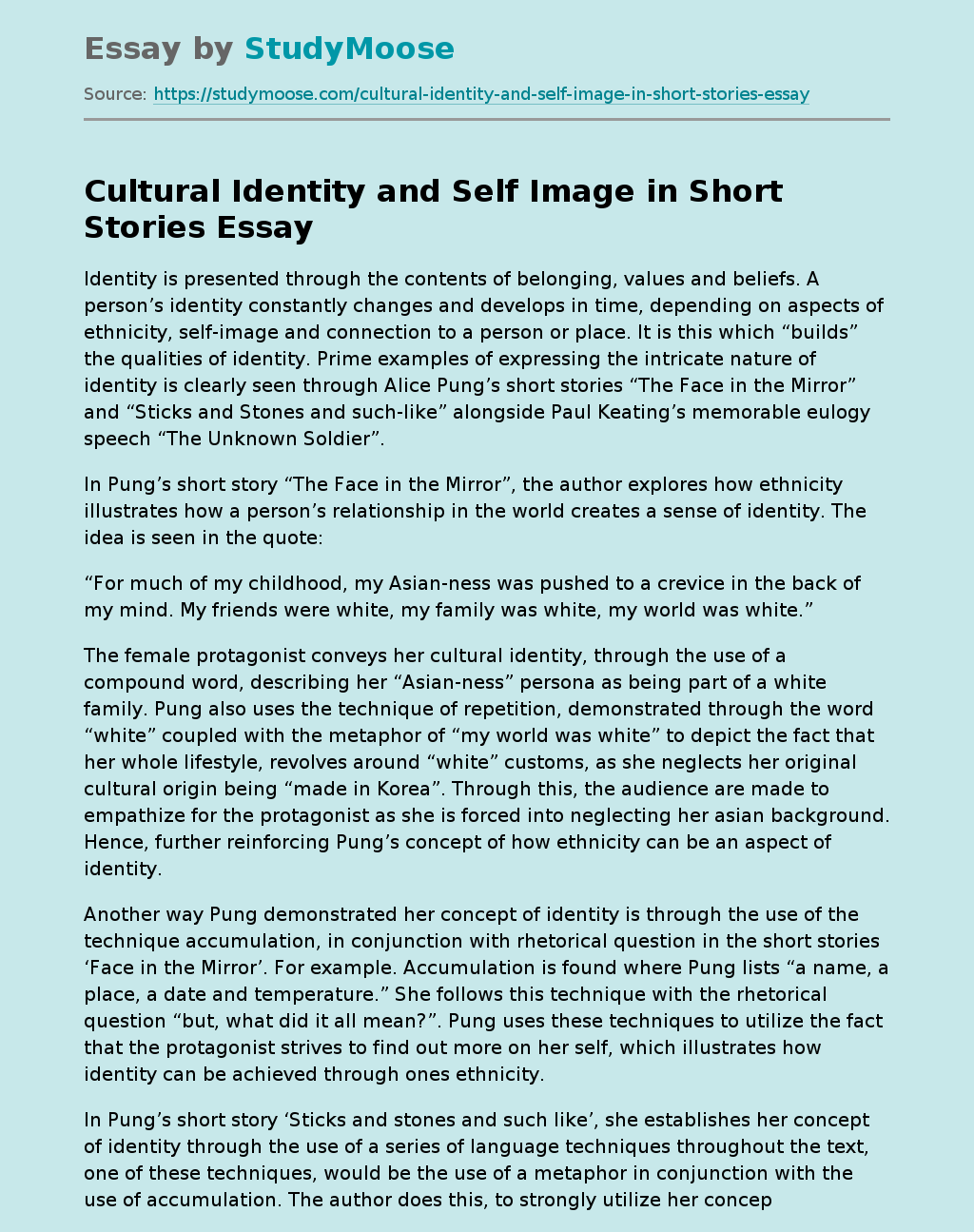