In preparation for this reflection, I began by thinking about what cultural event I would most like to attend, what would work for the assignment and what would also benefit me in my personal life by actually forcing me out of my comfort zone to experience things I never have before. Because Christianity is such a huge part of my life I immediately thought I would want to do something based on another religion since I’ve never really gone out of my religious comfort zone, but for this assignment I chose to go to a gay bar.

Don't use plagiarized sources.
Get Your Custom Essay on Cultural experience Just from $13,9/Page

The reason I chose to do this was because I have been raised as a Christian, I grew up in a very conservative town and while I support gay rights being around gay people is still something that is foreign and a little bit uncomfortable for me. My roommate also chose to use going to the gay bar for an assignment for her human sexuality class, so while knowing that I would have my roommate going with me made me a little bit more comfortable I still knew that this would be something that pushed me way out of my comfort zone.

We both live in Elkhart, Indiana so while we were home for spring break a gay friend of my roommates offered to take us to a club called “Metro” which is an 18 plus gay bar located in Kalamazoo, Michigan which is about 45 minutes away.

Before going to the gay bar I was so nervous. As mentioned before, while I support gay rights I have not necessarily ever been exposed to them and I wasn’t sure at all what to expect. The bar that we went too isn’t strictly a gay bar so there would most likely be other straight people there but I had no idea how exactly to prepare myself for the situation. Because we were going with my roommate’s friend, who is gay, I knew I would feel a little more comfortable since we weren’t just walking in completely unprepared. I was worried what people would think of me when I went, if they would assume that I was gay. I didn’t know if it was normal for gay’s to take straight friends with them, I was worried about how people would judge me. As I began to get ready for the night I wasn’t really too worried about what to wear, I just wore something that I would normally wear to go out but mentally I was less prepared than ever. I had no idea how I was supposed to act, what if it was awkward once I got there. Before we went my roommate and I met up with her gay friend and several of his friends.

His friend group contained a mix of both gay and straight men and women who would be going to the bar with us so I immediately felt more comfortable, knowing that I wouldn’t be the only straight one other than my roommate. I expected the ride there to be awkward, considering I didn’t know anyone other than my roommate and she didn’t know anyone other than the one guy and me, but instead they were all so friendly and told us not to be nervous. Because we were going on a Saturday night they explained to us that there would probably be more gay’s there than the other nights of the week/weekend but that didn’t mean they would assume we were gay, and people were usually pretty good about asking before they hit on you. After the 45 minute drive there we finally arrived and walked in. As we walked in a realized that it wasn’t any different than any other bar would be (not that I’ve been in that many since I’m only 19) full of people, dancing, music and drinking. The inside of the building was pretty big and there was plenty of room. Almost everybody there was dancing. The people we came with were all over 21 so they all went and got drinks while my roommate and I just hung out. It was a little overwhelming at first. There were definitely a lot of gay people around, dancing together, standing at the bar flirting, and just hanging out with groups of people. Eventually we started to loosen up a little bit, while I didn’t really talk and get to know a lot of gay people I was complimented by a lot of them. During our time there we pretty much just hung out and danced in the group that we came with. A few of the people that we came with went off and danced with other people, but because I still felt a little uncomfortable and awkward we didn’t really venture to far apart from our group and go dance with anyone else or anything. I think it would have a been a very different experience if we had gone when we were 21 and could drink at the bar, I think it would have changed the experience a little bit. We arrived at the bar at a little bit after 10 which is when the dance floor opened and stayed until around 1 in the morning.

The part of this experience that was the most compelling to me was almost the sense of community that I felt was just there between the gay community. Like there were a lot of groups of people there that night that didn’t even know each other, but you would never guess that by the way they acted like they had been friends for years. Even towards me and my roommate who they didn’t know, was just some straight stranger walking in and “observing” them they were so nice and accepting. They were willing to let us into their environment, knowing that we were not a part of it and I felt no judgment or anything. My fears that I had felt earlier in the day before going were put to rest, while some people were unusually friendly to me no girls really tried to hit on me, which was really relieving. As mentioned above, the most shocking thing I noticed was the community, or the way they socialized with and accepted themselves and each other. I think that at the roots of everything its amazing how well they have a grasp on who they are, and who they want others to see them. Because being gay is looked down upon in many parts of our society that makes them part of an oppressed group. Not only are gay’s an oppressed group but I also saw varying degrees of sexism. Because the gay community also includes transgender people as well. This forced me to think past my original understanding of gender. On page 318 of the book it talks about how gender is a social construct, meaning that gender is something that society defines which was really different when you read about it and see it in person. In person seeing someone who doesn’t associate with the “gender” they are born with is something that you don’t really understand until you experience it in person.

By attending this event I learned a lot more about the gay community than I could ever learn from a textbook. They really are a very close knit community. Their community is a lot different than what we observe in our day to day life. In normal everyday life when we see members of the gay community on the street they are treated differently, they are looked out as outcasts and they are oppressed but seeing them in this environment gave me an entirely differently outlook on them and made me respect them a lot more.

The reason this matters is because I am certain that there are other people
just like me who feel uncomfortable, uneasy and unsure around people that they haven’t really been around before. Because of the way I was raised I was taught to believe being gay was wrong, so I was never really around them very often so I was unexposed and uneducated about them entirely. I think it was really good for me to experience this because it made me realize that they really aren’t that different than everyone else.

The most important thing I took away from this experience was that contrary to what I personally have been taught to believe, what society has forced us to think they are not horrible awful people. They are people just like me who have been oppressed and faced many challenges to get to where they’re at now and they still don’t receive the respect and benefits that they deserve in our country. I took away that it is important for me to for that very reason it is important for me to form my own beliefs and not just go off of what everyone around me has told me. 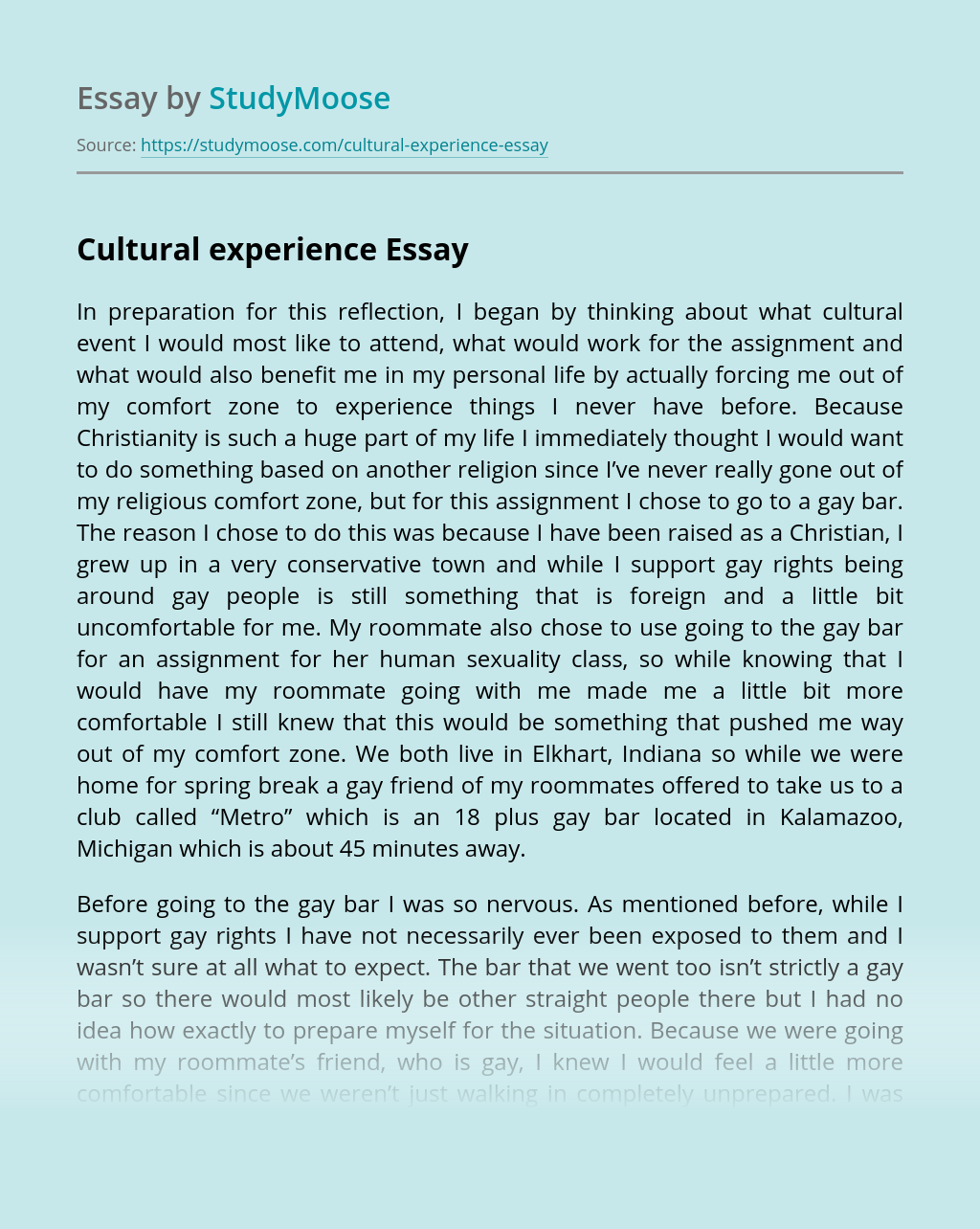 Week 3 Women movement was really a intresting topic for me .Women are powerless, and they should be ensured. Men are solid, and they are in every case superior to ladies. This is the thing that a large portion of the general population has been reasoning from the old time to present day days. Despite... VIEW ESSAY

Tennessee Williams is a renowned playwright and theorist of America in the early 20th century. His famous works include A Streetcar Named Desire, Cat on a Hot Tin Roof and The Glass Menagerie. His famous play The Glass Menagerie is attributed to be the work that catapulted him to literary notability. It has been titled... VIEW ESSAY

View sample
Scm-What Is “Functional Product”, and What Is “Innovative Product?”

Beach-side Johann de Lange 1. Not the plump plenty of the peninsula: fruit sun-preserved & bugle-round, evaginated, the deep, sink-in-green of lawn or the colourul conversations of flowerbeds all year long with small variations on the four seasons. No, here everything is stingier: purple sour figs, pomegranates, & quinces share their sweetness more thriftily: not... VIEW ESSAY