Critical Reflection of an Interview

This piece of reflective writing about my university interview will be based on the model of Gibbs reflective cycle (1988) this is the reflective cycle developed by Graham Gibbs (1988) in order to structure the events surrounding my interview and subsequent reflection. When the university offered me a chance to attend the selection day for the mental health nursing course I was filled with a sense of curiosity as to how being interviewed in a group format would differ to my previous experiences.

Don't use plagiarized sources.
Get Your Custom Essay on Critical Reflection of an Interview Just from $13,9/Page

Prior to the interview I considered the nursing knowledge I had acquired and wanting to develop to achieve the best academic qualifications, through research I found that The Times stated in 2009 that the University of Nottingham’s “Academic Strengths Ranked as the 10th best university in the UK by the Shanghai Jiao Tong world rankings index Placed in the top one per cent of all universities worldwide” (The Times Good University Guide, 2009).

I approached the interview knowing that they offered everything I required academically and also wanting to show what I could offer to the university.

When I arrived at Nottingham University, it became apparent there was a vast amount of people attending the selection day and competition was obviously fierce and CL Hardy considers that “Interviews are performance events–high pressure situations that can initiate the dreaded anxiety attack” (CL Hardy, 2012) and I recall feeling slightly anxious. After the initial meet and greet seminar we were split into smaller groups within a classroom.

Upon entering the classroom I began to feel apprehensive and self-aware of my actions and how this could affect my chances of being accepted, it is understood that “performance will be enhanced or impaired only in the presence of persons who can approve or disapprove our actions” (Nickolas B. Cottrell, 1972) The room contained three assessing staff and about ten group members, we all gave a brief introduction about ourselves and any personal information we were willing to provide this very much followed the model of ‘Johari’s window’ (1984) where people are unwilling to reveal personal information to others.

As the other members of the group spoke I tried to understand their different backgrounds and how they would apply this to the nursing profession, I found this very informative, Shattell M suggests that “Active listening is considered to be one of the core elements of understanding” (Shattell M, Starr SS, Thomas SP, 2007). This relates to good nursing practice and I feel I this is an area I thrive in. We were given a ask to do for the first part of the interview, where we received some information about a particular scenario in which we had to list the most important items in order. This would require us to work as a team reflecting situations in nursing where opinions may differ and a compromise met and where communication is a vital commodity, the Department of Health states that “Staff should communicate effectively with each other to ensure continuity, safety and quality of health care for all” (Department Of Health, 2010).

After much deliberation as a team we came to a compromise and although some of the answers were wrong I felt this was a useful learning opportunity, offering our personal opinions and displaying our teamwork abilities. The second part of the interview was classroom based, the atmosphere in the room was tense, and I knew that this was the last opportunity we would have to impress the assessing staff. One of the questions raised was “what do you think a Mental Health Nurse’s role is? Having a background in Mental Health Nursing I was eager to answer this question, however I noticed people interrupting each other, this made it difficult and I felt my responses weren’t thoroughly explained. I enjoyed these tasks thoroughly, although remember feeling slightly pressurised into speaking due to the nature of the interview process. I was pleased with how I had contributed to the discussion however felt there was more I could have said, and I was conscious about trying to impress assessing staff with my knowledge.

An area that I found uncomfortable during the group interview was the willingness of some to divulge private and personal information in a public setting. In my experience confidentiality and disclosure is a sensitive issue as its “reported that communication and confidentiality were ‘once again’ near the top of the list of complaints about the NHS” (The Scottish Public Services Ombudsman, 2010). In light of this I felt that clearer boundaries should have been instated to discourage this.

Overall I felt that the interview process had gone well, although the format of the interview was unfamiliar to me. During the group activities where we shared our thoughts took great pressure off the situation and allowed more informative content and freedom of speech as building these relationships with others mirrors the way you build that trust with service users “making the therapeutic relationship a fundamental element of mental health care” (McGuire R, McCabe R, Priebe S, 2001) and being able to develop these relationships is vital to provide quality patient care.

I felt I had given a good account of myself throughout and I left very impressed justifying my research that “Nottingham is internationally renowned for ground-breaking research and continually attracts world-class academics” (The complete guide, 2009). If I had the opportunity to undergo this process again I would research more into the Mental Health field so I had a greater knowledge when prompted to discuss it, also I would take a more relaxed attitude towards the group discussions and take more time to consider the task and structure my answers appropriately, being unfamiliar with this format I struggled to adapt initially.

Looking back I think the final stage of the interview in small groups responding to questions about the field could have been structured better to allow time for people to express their feelings without feeling rushed or under pressure, and people constantly interrupting.

Critical Reflection of an Interview. (2016, Sep 17). Retrieved from https://studymoose.com/critical-reflection-of-an-interview-essay 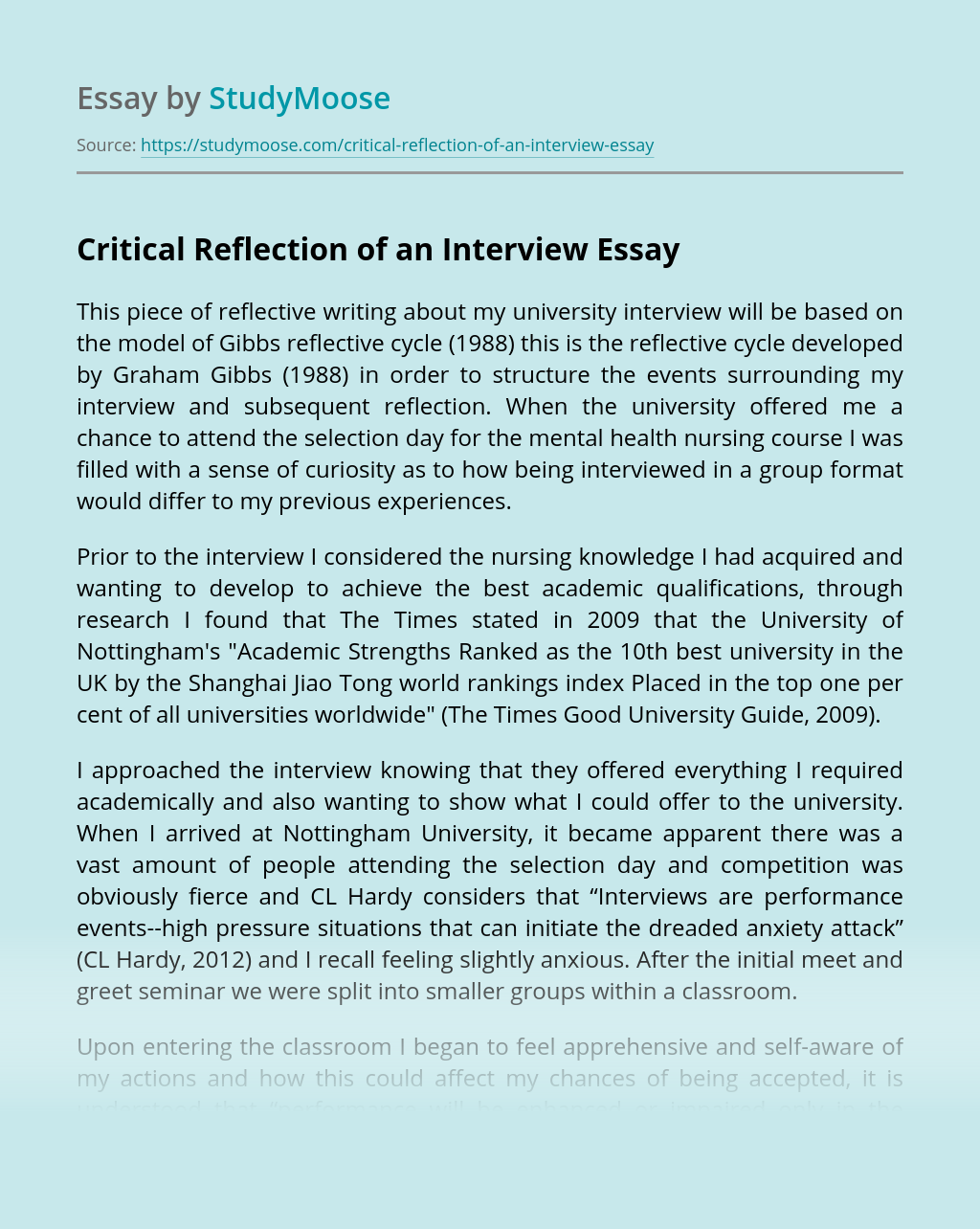 Rate this post The goal of this paper is to assist Bradley with the recruitment of brand-new worker and the selection procedure to benefit the start-up of his company. A crucial factor to determine in the procedure is to have a strategy with an outline instructions with an overview of the time reserved for recruitment....

Rate this post It is never too early to begin considering the career that you want. This is asked by lots of parents of children at an early age, instructors in elementary school and junior high school, again in high school, however what is not constantly asked is “what is needed to accomplish or reach...

Get Essay
New Advice That Changed My Life

Rate this post In my second interview with Cassie I learned some very valuable things. Cassie told me the best advice she ever received was no matter what happens, keep going, things might seem bad, but it’s not over yet and hard work pays off given by a family friend. Cassie says her family friend,...

Rate this post A person’s personality and attitude are dynamic and made up of various, complex set of factors. The question of nature versus nurture and its contribution to a person’s personality has been debated for decades. Based on the interview that I conducted, I have come to a conclusion that one’s environment plays a...

Rate this post The Human Service field is vast with different approaches based on uniquely meeting individual’s needs. Some of these needs are met through interdisciplinary knowledge, placing concentration on preventive measures as well as correcting errors of life, and up-holding responsibilities of enhancing the meaning of life. Human Services profession is one, which supports...

Rate this post News: Setting: Germany, Europe Time: World War Two Characters: Liesel, Reporter Summary: This is an interview between our correspondent and Liesel Meminger. She is a remarkable teenager who has lots of stories in her life before and post-World War two. The news agency is interviewing her for our head story for “Teen...

Comparison Of President Bush's RTE Interview And His Address To Congress

Rate this post The ability to move and inspire people through oratory is a powerful gift, and never more so than for national leaders at points of national crisis. In such times they are expected to provide direction and leadership for their people. They must project authority and understanding and have the communication skills to...

Interview with a School Counselor

Rate this post Counseling has many components in different fields such as a school counselor, marriage and family counseling, addiction counseling, individual and private practices, and many more. For my project, I interviewed Mrs. Ross Freeman, a school counselor who talks about her journey of becoming an Elementary School Counselor. We discuss what the requirement...