Critical Analysis of the Photographic Work of Annie Leibovitz

Annie Leibovitz is one of the most remarkable photographers of our time. From portraits to glamour photo shoots, advertising photography stints to photography exhibits, Leibovitz has succeeded to establish an image and reputation for herself, as the products of her artistry and ingenue in photography reflects her inimitable, matchless, and exceptional artistic disposition. Furthermore, her sudden rise to success and fame at the age of 20 tells a lot about the certain characteristics, talents, and skills of Leibovitz that enabled her to become one of the most revered photographers in this decade.

Turn in your highest-quality paper
Get a qualified writer to help you with
“ Critical Analysis of the Photographic Work of Annie Leibovitz ”
Get high-quality paper
NEW! AI matching with writers

Leibovitz life, like her career and works of art, is all too interesting a matter or issue to look into. Therefore, the remainder of this discussion shall focus on the life and career of Leibovitz. In order to understand how Leibovitz became an icon for art and photography, we shall unearth her life experiences and determine when she became fully involved with the arts. From biographical references, we shall attempt to discover her inspirations and motivations in defining what her artistry and talents stand for.

Furthermore, in order to realize a comprehensive analysis of Leibovitz, as not only an individual but also a talented and artistic photographer, we shall look into various photographs that she had taken over the years. By dissecting the diverse perspectives or points of view and messages embedded within the frames of photographs taken by Leibovitz, we shall be able to grasp her creative and inventive personality as well as the artistic features and characteristics of her works that made them celebrated and illustrious.

Tracing the Origins of an Artist: Anna-Lou Leibovitz Anna –Lou Leibovitz was born in Westbury, Connecticut in 1949 to parents Sam and Marilyn Leibovitz. Her fascination and engagement to the world of arts and photography began when she took up an art course at the San Francisco Art Institute. Leibovitz’ course covered the study and analysis of various paintings. She focused religiously on her major for her first and second years in college. After Leibovitz’ sophomore year, she was asked by her mother to accompany her to Japan for the summer vacation.

(Somerstein) The short time that she spent living in a kibbutz in Israel thereafter has helped in providing inspiration and insights to improve her craft. (A&E Television Networks, p. 1) The Beginnings The start of Leibovitz career was impressive all at once. From her travels in many places in the U. S. and other countries, Leibovitz has taken numerous pictures, which she later on compiled for her personal portfolio. When she returned from Israel, she was immediately hired by the “Rolling Stone” when one of the founding editors of the magazine saw her artistic and creative works.

For Leibovitz’ first “Rolling Stone” shoot, her task was to take pictures of John Lennon for the cover of the magazine. John Lennon Rolling Stone (Jan 21, 1971) By Annie Leibovitz <http://www. rollingstone. com/news/coverstory/10247676/1/John_Lennon> According to Annie Leibovitz, the picture that was chosen for the cover of the magazine was not intentionally or deliberately taken. The picture, according to Leibovitz, was only a “meter reading. ” (Leibovitz) However, in the end, it was still chosen to be cover shot for the magazine because of the image’s candor and unpretentious nature.

We all know that John Lennon was a member of The Beatles, one of the greatest music icons of all time. Being a member of rock band during that time meant adapting a public image or reputation that resound the “rock and roll” kind of life, behavior, and attitude, especially because Lennon was extremely famous during that time. However, Leibovitz’ photograph of Lennon was far from the established image of a famous musician who just happened to be part of The Beatles. The image was plain and unpretentious in the sense that there were no heavily implied messages or impressions.

Although people would not know who Lennon was really as a person, the picture seemed to portray who he was – unbounded by fame and stardom. Leibovitz was successfully able to capture a certain air of Lennon’s honest, intense but tacit strength and influence. Leibovitz’ ability to bring a certain kind of powerful, individual, distinctive, and honest personality, as reflected in Lennon’s image, have solidified who she was, as well as her vision and creativity, as an artist and a photographer. The Rise to Fame

After two years of working for the “Rolling Stone,” Leibovitz became the magazine’s chief photographer. From the simple and realistic image that she took of John Lennon, she was able to go beyond what she knew of photography and evolve portrait photography into something distinctive and creative. (A&E Television Networks, p. 1) Leibovitz had the liberty to develop and improve her talents, but at the same time deliver photographs that bordered on inventiveness and creativity. She began taking glamorous and elaborate images as opposed to the simple and lackluster image of Lennon.

John Lennon and Yoko Ono Rolling Stone (22 Jan 1981) By Annie Leibovitz <http://www. rollingstone. com/photos/gallery/5392223/1981_rolling_stone_covers/photo/1/large/elvispresley> The images taken by Leibovitz from then on were bold and modern. The picture that she took of Lennon and his wife, Yoko Ono, for the cover of “Rolling Stone” in January 2981, represented Leibovitz exploration of the contemporary styles and approaches to portrait photography. Another key feature of Leibovitz’ works was that the focus is always on different kinds of relationships, personality, and emotions.

In this particular image of Lennon and Ono, Leibovitz wanted to bring out the strong ties that bind the two people together as partners. Lennon and Ono also portrayed different roles within the kind of relationship illustrated in the image through body language. Leibovitz saw the sensitivity and vulnerability of Lennon as he clang to Ono, and Ono’s strength in withstanding the cold. (Leibovitz, 2) The honest and unpretentious element represented in the picture was the strong and immovable love or passion between Lennon and Ono. As Leibovitz’ career advances, her works also become provocative on a grander, larger scale.

Some say that Leibovitz’ photographs were merely image framing the glamour and glitz of a cross between Hollywood and Rock-and-Roll lifestyle as most portraits taken by Leibovitz were extremely forceful and ambitious. (Stevens, p. 99) As Leibovitz received criticisms and recognition for her works, the attention on the photographs taken by her escalated, and so did her artistic visions and inspirations. If one would take the most controversial photographs taken by Leibovitz throughout the years of her career, one common theme that brings those images together under a singular theme would be subtle yet artistic nudity.

The existence of nudity in Leibovitz’ pictures has been one of the primary reasons why her works have received much attention from various groups and individuals, but also the reason why her visions and inspirations remain to be that of the translation of honesty and regularity through art. C Bette Midler Whoopi Goldberg (1979) (1984) New York Magazine, 1983 The Wall Street Journal, 2008 Coming to Terms with the True Essence of Portrait Photography

However, despite the artistry and radical messages that Leibovitz shot through her photographs, her talents were quickly categorized and judged under provocative images, which were sold and captured attention simply because of nudity. Leibovitz suddenly realized that there was something amiss from her works and she felt that she lost the ability to capture relationships, real emotions, strong messages, and such in her photographs. She believed that portrait photography should also emphasize the relationship of the subject to the camera and the photographer in order to produce images that are real and engaging, and not plain and empty.

For this reason, Leibovitz stopped working for a month in order to figure out how she can improve her craft. (New York Magazine) Narelle Brennan Narelle Brennan As a Showgirl in Las Vegas As a Mother with her Two Children (1999) (1999) “Women,” 1999 “Women,” 1999 Taking time off work has helped Leibovitz get back on her heels. Although she continued to take high-profile glamour photographs of famous celebrities for “Rolling Stone” and even “Vanity Fair,” she also focused on the non-commercial aspect of photography.

In one book that Leibovitz and Susan Sontag were able to publish in 1999, she presented the depth of her artistry by taking photographs of real women from different walks of life. In this particular collection, Leibovitz was able to recapture her trademark and style in taking photographs – building a relationship between the subject/subjects and the camera and the photographer, building a relationship among the subjects, portraying real and strong emotions, integrating images of power, strength, and influence, reality and simplicity, and personality.

From the images taken of Narelle Brennan, Leibovitz was able to capture who Brennan was as a person, unbounded by her being simply a showgirl, but also as a mother of two children. The pictures were honest in such a way that it portrayed how the personalities of women change depending on the various roles that they play. Leibovitz successfully depicted freedom, nonconformity, and the need to put down biasness or prejudice when it comes to tagging individuals because of what they do or what they become.

Furthermore, she was able to express her sensitivity in answering for Brennan, that her being a Showgirl in Las Vegas does not stand for her entire person. Conclusion Leibovitz’ artistry and creativity in photography have evolved through time. One may simply categorize Leibovitz’ skills and talents as unsettled or inconsistent judging from the diversity of the subjects and themes of the photographs that she has taken over time.

However, despite Leibovitz’ irregular and erratic display of her talents and skills and photography, the changes that she had to see through all those years of building her career as a photographer generally defined her artistry and style. Leibovitz’ art has certainly improved through time and she was able to take advantage of all the opportunities to take photographs, make mistakes, experiment, and translate drama, emotions, passion, relationships, and such, into photographs, in order to develop her skills and talents as a photographer.

Therefore, Leibovitz’ photography may be defined as flexible or adaptable, but at the same time reprehensible, strong, provocative, and forceful. She understood how the relationship between the subject, the camera, and the photographer should be developed in order to capture genuine emotions and feelings, relationships and connections, and bring out the dominant personalities of her subjects to add meaning to the photograph. The results were timeless and unforgettable images that would resound her inventiveness and adaptability as a photographer. Works Cited A&E Television Networks.

Critical Analysis of the Photographic Work of Annie Leibovitz. (2016, Aug 10). Retrieved from http://studymoose.com/critical-analysis-of-the-photographic-work-of-annie-leibovitz-essay 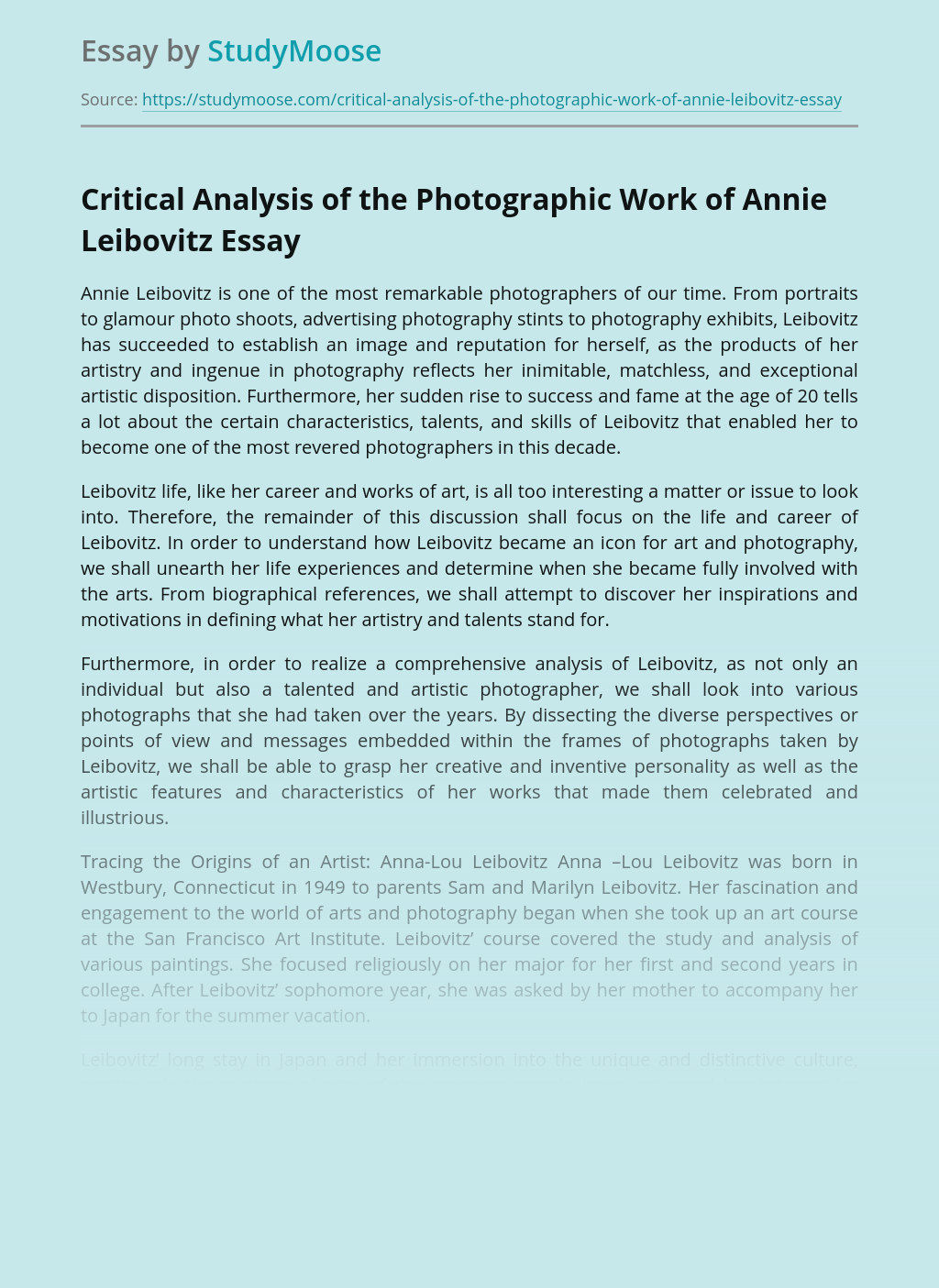 Turn in your highest-quality paper
Get a qualified writer to help you with
“ Critical Analysis of the Photographic Work of Annie Leibovitz ”
Get high-quality paper
Helping students since 2015
Stay Safe, Stay Original