Annie Dillard’s essay, “The Chase”, uses many rhetorical elements in the thesis to reach her audience; some of these include parataxis, climax, and hyperbole. In the essay Dillard states that “The point was that he had chased us passionately without giving up, and so he had caught us. ” This helps clarify the thesis as, childhood is a playful time and adults should maintain a playful spirit. “The Chase” is about the author and her neighborhood friends throwing snow balls at cars one winter day.

Turn in your highest-quality paper
Get a qualified writer to help you with
“ Annie Dillard’s The Chase ”
Get high-quality paper
NEW! AI matching with writers

The day was going well and without trouble, no adults were bothering their fun, until someone hit a black Buick that was driving down the street.

The man in the car then stopped the car and got out and started to chase the children. The man chased them through hedges, down streets, every backyard and block after block. At this point it was only Dillard and her friend Mikey running from the man because the other children when their separate ways.

Eventually the man caught them because the children grew tired. The man only said “You stupid kids. ” Dillard describes this statement as “redundant, a mere formality. ” Dillard believes the point of the chase was that the man chased them passionately, without giving up, and all he did was say those three words she will never forget.

Dillard uses many rhetorical elements to help prove the thesis, one of these is climax. She uses this element to keep a suspenseful mood for the reader wanting and waiting to see what happens next.

An example of this in the story is when the black Buick was coming down the street and when the car makes it to them they unleash snowballs at the car.

The example of climax in this part of the story is when the driver starts to open the door; this is a climax because the reader is waiting to see what happens and starts asking questions in their head like what is the driver going to do? is he going to hurt the kids or is he just going to yell at them? Another example of climax occurs as the driver finally catches the kids on the top of the hill by their jackets. This is an example of climax because the author builds up the essay by adding suspenseful phrases and because the reader is asking questions again such as is the driver going to hurt the children or is he going to bring them back to their parents. Both examples help the audience comprehend Dillard’s thesis by conveying to the reader that adults should have a more childlike spirit.

Another rhetorical element that Dillard uses in her essay is hyperbole; she uses this element to exaggerate parts of the story to keep the reader interested. An example of this is when Dillard is talking about what would have happened if they ran all of the way to the Panama Canal and what the man would have done if the man caught them. Dillard says, “He could have fried Mikey Fahey and me in boiling oil, say or dismembered us in piecemeal, or staked us to anthills.

Another example of a hyperbole is “If in that snowy backyard the driver of the black Buick had cut off our heads, Mikey’s and mine, I would have died happy, for nothing has required so much of me since as being chased all over Pittsburg in the middle of winter—running terrified, exhausted—by this sainted, skinny, furious red headed man who wished to have a word with us. ” In this quote, Dillard is exaggerating the fact that the man would have cut off their heads and that she would have died happy because the man had committed to chase them all day, meanwhile, all the man wanted to do was scold them.

Dillard also uses a third rhetorical element in her essay, parataxis. Dillard uses this to help her story by writing independent clauses to emphasize what she is writing. An example of this in Dillard’s essay is after Mikey and she get caught by the man. Dillard writes “We three stood staggering, half blinded, coughing, in an obscure hilltop backyard; a man in his twenties, a boy, a girl. He had released our jackets, our pursuer, our captor our hero: He knew we weren’t going anywhere.

This helps in explaining the thesis that this experience was just like a playful game of tag between the man and the two friends. Another example of the rhetorical element is “It was a long time before he could speak. I had some difficulty at first recalling why we were there. My lips felt swollen; I couldn’t see out of the sides of my eyes; I kept coughing. ” This example shows how tired they were from running around the community that almost seems like a childish game of tag, explaining the thesis.

Throughout “The Chase,” Dillard utilizes rhetorical elements that serve as a function. They help her convey meaning and purpose in her writing. Three examples that I found evident were climax, hyperbole and parataxis. The use of all three of these elements made the story interesting and ultimately leads the reader to a better understanding of the thesis because it creates a more lifelike feel to the story by the reader being able to relate to it. 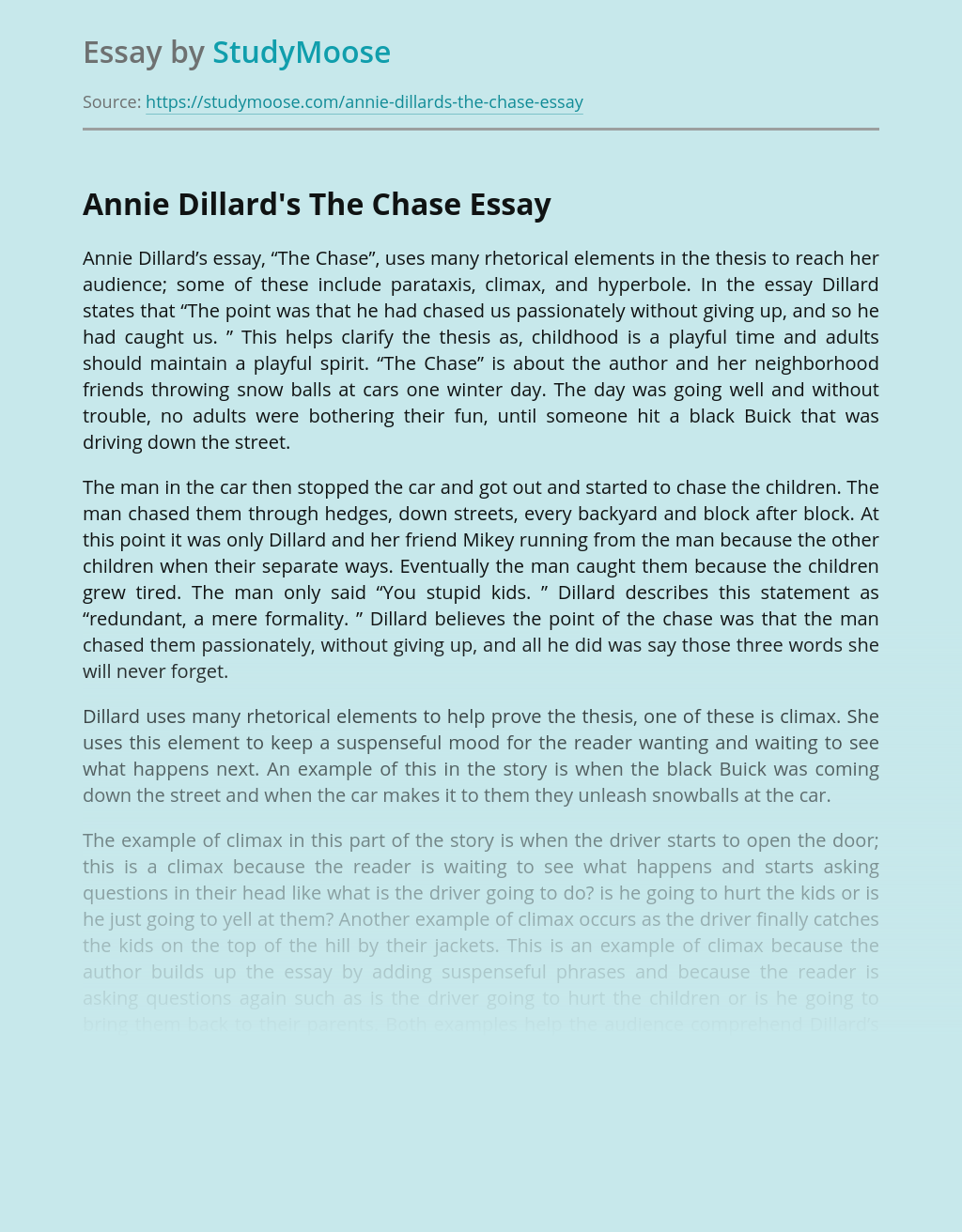 Turn in your highest-quality paper
Get a qualified writer to help you with
“ Annie Dillard’s The Chase ”
Get high-quality paper
Helping students since 2015
Stay Safe, Stay Original