Don't use plagiarized sources.
Get Your Custom Essay on Criminal Justice System Just from $13,9/Page

7). What is law? Law by definition is a rule of conduct, generally found enacted in the form of a statute, that proscribes or mandates certain forms of behavior (Schmalleger, 2001, p. 114). The relationship between crime and the law is that without laws on the books there would be no crimes. Society would be in utter chaos. Society uses the consensus model and the conflict model to decide what acts are criminal.

In the consensus model society comes together and as a majority decide what is right and wrong behavior and make laws accordingly.

These laws are moral based. In the colonial times adultery was a crime where the guilty sentence was corporal punishment. Today adultery is a personal issue not a crime. The conflict model different groups in society will have different ideas of what is right and wrong so whom ever has the power decides what a criminal act is. Our government has three branches, the executive, the legislative, and the judiciary. These three branches make up the framework to our criminal justice system. The executive branch in federal, state, and local have the power to appoint judges, heads of the department of corrections, and police chiefs. The legislative branch in federal, state, and local levels decide what criminal acts are and what sentences are for those acts. They also provide the funding for the criminal justice agencies. The judiciary branch is made up of the trial courts which adjudicate the guilt of the person charged with the crime, the appellate courts interrupt the laws according to the constitution. The U.S. Supreme Court is the highest court in our justice system. The precedents it sets are used as the guidelines for lower level courts to reach their conclusions (Schmalleger. 2001. p. 120).

The major components to the criminal justice system the police, the courts, and corrections (CJi, 2014). The police, made up of sheriff and police departments, enforce our laws, investigate crimes, make arrests, and insure public safety (Schmalleger, 2011, p. 17). The courts, made up of judges, prosecutors, and defense lawyers, conducts fair and impartial trials, decide criminal cases, ensure due process, impose sentences on the guilty, and provide a check on the exercise of power by the other justice agencies (Schmalleger, 2011, p. 17). Corrections are made up of jails, prisons, probation, and parole. Correctional agencies carry out the sentences imposed by the courts, provide safe and humane custody and supervision of the offenders, rehabilitate, reform, and reintegrate offenders back into society, and respect the legal and human rights of the convicted (Schmalleger, 2011, p. 17). The process of the accused through each component starts with the investigation and arrest. The police gather evidence at the scene of a crime, the do an investigation and attempt to reconstruct the sequence of events and who committed these events (CJi, 2013).

After an arrest is made the suspect is booked. During booking the suspect is fingerprinted, picture is taken, personal information, details of the charges are recorded and an administrative record of arrest is made (CJi, 2014). The suspect is also read his rights and a statement acknowledging the advisement of rights and understanding of them is signed by the accused. The second step in the process are the pretrial activities. They start with the first appearance usually within the first 48 hours after the arrest (CJi, 2014). The suspect must be brought in front of a magistrate, the charges and the rights are read again. Bail may be set in the form of cash or property. Many suspects are released on their own recognizance. If the suspect can’t make bail they go to jail to await the next step. The court will appoint a lawyer if the suspect can show a financial hardship. At the preliminary hearing the court will establish if sufficient evidence exists against the suspect. The judge will decide if there is probable cause to believe that a crime was committed and the suspect committed it (Schmalleger, 2001, p. 19).

The next step in the process is the information or indictment. Information is a formal written accusation filed on the basis of the outcome from the preliminary hearing (CJi, 2014). The indictment is returned by a grand jury. The Grand jury hears evidence from the prosecutor and decides if the case should go to trial (CJi, 2014). Then it is time for the arraignment. This is the first appearance of the defendant before the court that has authority to conduct a trial. The accused stands before the judge and is read the information or indictment against them. Their rights are read to them again and are asked to entry a plea. The acceptable pleas are guilty, not guilty, or no contest (CJi, 2014).

A plea of no contest can’t be used as an admission of guilt in civil proceedings or private law suits (Schmalleger, 2011, p.19). The third step in the process is adjudication. The 6 th amendment to the U.S. Constitution guarantees every criminal the right to a fair trial by a jury. The trial involves an examination of all issues of fact and decides on relevant laws relating to the case for the purpose of convicting or aquitting the accused (CJi, 2014). The forth step in the process is sentencing. The judge can sentence the offender to pay a fine, be placed in on probation, or incarcerated. Multiple charges can be served consecutively, one after another, or concurrent, at the same time (CJi, 2014).

The final process is corrections. The offenders are sent to prison, they are classified and assigned to facilities and treatment programs. If the judge gives them a suspended sentence they are placed on probation. When an offender serves part of their sentence and released they are placed on parole until they end of their sentence (CJi, 2014). There are 5 goals of the criminal justice system. They are deterrence, incapacitation, retribution, rehabilitation, and restoration. Deterrence inhibits criminal behavior through fear of punishment. Incapacitation removes the offender’s ability to commit crimes. Retribution is taking revenge on the offender. Rehabilitation is correcting the behavior with education and treatment. Restoration attempts to make the victim whole again by repairing the harm that was done (CJi, 2014). I believe the criminal justice system is because it has integral parts or components that work together. The system may have flaws but it is still one of the greatest systems in the world. 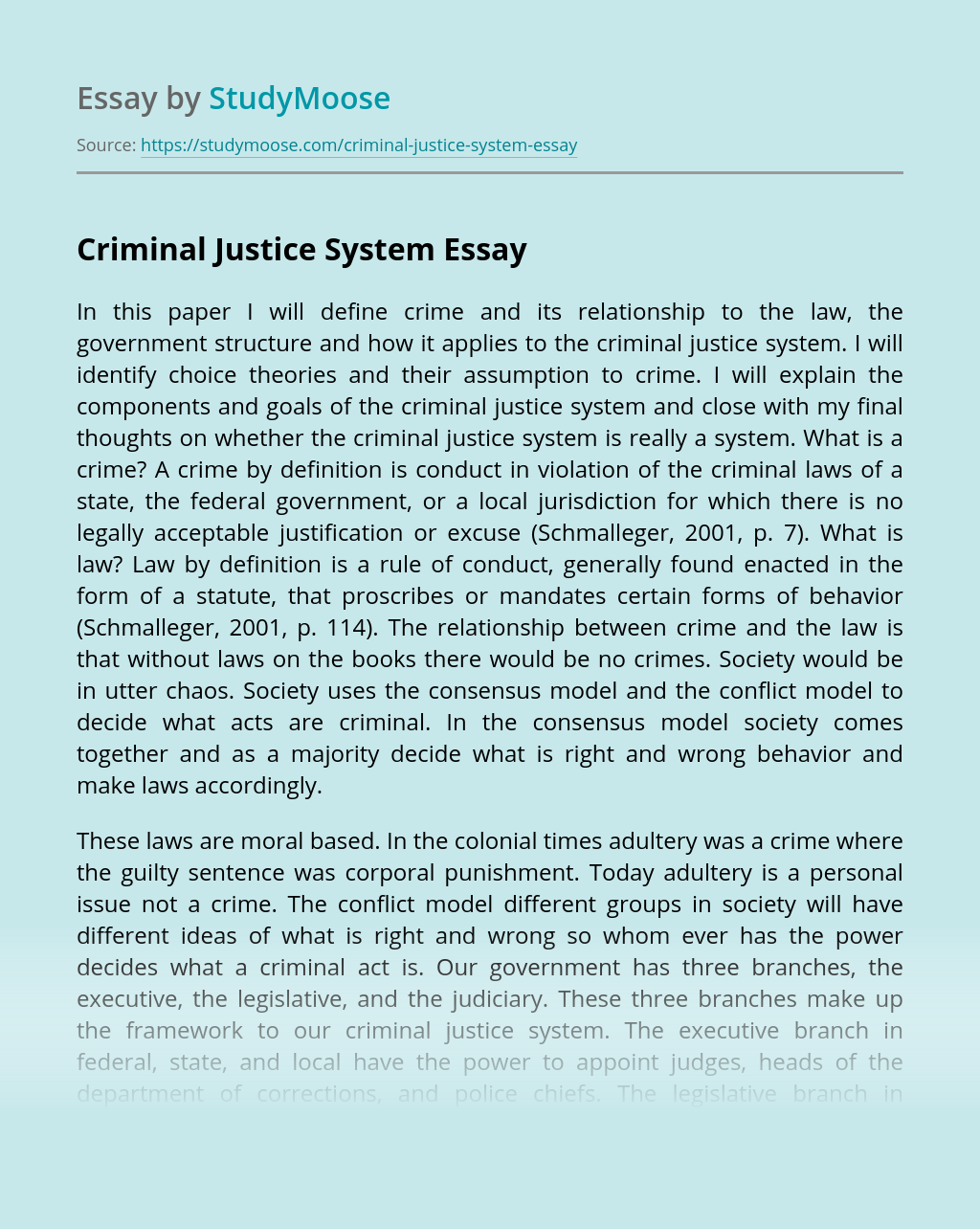 In this paper I will be evaluating past, present, and future trends pertaining to the corrections system. There are many different trends that correctional facilities have used in the past and these trends have continued on to modern day and maybe will continue on into the future. As part of my evaluation I will identify...

The Judiciary’s role is to give everyone fair access to the courts to solve legal problems fairly and efficiently, decide justly the guilt or innocence of anyone charged with a crime, and interpret the laws and protect the rights and liberties guaranteed by the Constitutions of California and the United States. Criminal court is where...

View sample
Should Parents Be Punished for Crimes Their Children Commit?

Do you think if it was to be your child doing this you should be held accountable for their crime? I believe parents should not be held responsible for crimes that their children committed because they did not force their child/children to do the crime. Since people do have a mind of their own and...

View sample
What Crime Has Been Comitted

The purpose of this report is to sum up the court case of Rixon Vs Star City PTY LTD (2001 september). Mr Brian Rixon is the Appellant and Star City Pty Ltd (formerly Sydney Harbour Casino Pty Ltd) is the Respondent. Mr Rixon is suing Star City for battery, assult and unlawful arrest. What crime...