Correlation Between Concussions and the Sport of Football

Football is considered the American pastime and has created a name across the globe. However, this “great” organization has a controversial background. The NFL claimed to not be aware of the distinct correlation between concussions and the sport of football. They related concussions on the same level as “an everyday football injury and mentioned in the same stories as broken bones and pulled muscles”. They feared that the game of football would gain a dangerous reputation would would cause them a lose in revenue and ultimately players who were worried about their long term health.

Don't use plagiarized sources. Get your custom essay on
“ Correlation Between Concussions and the Sport of Football ”
Get custom paper
NEW! smart matching with writer

The lawsuit going underway includes any affected players by concussions that are experiencing the feared long term effects. The total NFL payouts over 65 years, including interest and $112 million sought for lawyer fees, is expected to be more than $1 billion. The amount of money awarded to retired players is determined based on how serious they were affected by the concussions. Players who would be diagnosed with Alzheimer’s disease or moderate dementia someday would be granted about 0,000 on average.

Players who were affected more severely, such as being diagnosed with Parkinson’s and Lou Gehrig’s disease in their 30s or 40s could potentially receive between $1 to $5 million. Families who lost a loved one to chronic brain trauma would be awarded as well. Through this settlement, the NFL would not have to reveal any previous information they withheld from the media.

The NFL, being as influential as they are, hired doctors who they knew would turn a blind eye to certain injuries such as concussions.

The NFL hired Dr. Elliot Pellman as the committee chair of the league’s concussion committee. Pellman was known, according to players on the New York Jets, to allow players to re-enter games with a concussion. He cleared wide receiver Wayne Chrebet who was unconscious after receiving a blow during a game. Pellman eventually stepped down as chair in 2007 as his reputation created a bad name for the committee. The committee was soon disbanded in 2009 as the committee continued to disregard tangible research by Boston University connecting concussions with the sport.

Because of the players in the NFL are not coming forward about their concussion symptoms or being cleared with a concussion, players ranging from middle school to college do so as well creating a dangerous stigma of football. In 2013, “Fairfax Public High school reported a 43% decrease in reported concussions”. These numbers are extremely drastic, raising the question, are the athletes refusing to come forward with concussion symptoms? A common loophole athletes are able take advantage of is intentionally reporting a low score on their baseline concussion tests. By doing this, they can retake the concussion test with a concussion and still be cleared to play. Athletes are afraid of being punished for reporting a concussion by losing a starting position and the progress they had made thus far that season. They hear and see on TV NFL players continue to play out the game after receiving a heavy blow and want to do the same. By nature, athletes are competitive, thus why they are competing at high levels. According to a study done by Neurologic Rehabilitation Institute in 2017, “the underreporting of concussions is estimated to be high, and the number one reason athletes do not report a concussion is because they do not want to lose playing time”.

The dangers of this, is that these players are not receiving the medical attention they need which could result in another concussion in the same season as players become more prone to receiving one after the first. Receiving a second concussion shortly after the first could result in permanent brain damage at a young age. This could result in as mild as short term memory loss to death. Alarming side of effects of concussions include dementia, Alzheimer’s, altered personalities, deficient motor functions, and the infamous Chronic Traumatic Encephalopathy (CTE). A large amount of retired football players who experienced heavy blows throughout their career have committed suicide. After their brains were examined they were diagnosed with CTE. It is crucial to diagnose a concussion as quickly as possible to prevent such life altering diseases.

A retired NFL player was seeking medical attention for his previous brain injuries while playing. The doctor’s were able to rule out alzheimer’s because of a new PET scanning technique. However, they could not diagnose or rule out chronic traumatic encephalopathy because it is only diagnosable after death. In an effort to make a change, the NFL pledged $60 million to research on a 4 year program on mild traumatic brain injuries(mTBI). With the pledged money, researchers hoped to improve better diagnostic accuracy to prevent further injuries to the players. “Studies assessing retirees should include objective medical, psychiatric, neurocognitive, and family history data, supplemented by laboratory investigations (eg, imaging, genotyping, and biomarkers) when possible”. The NFL also pledged another $30 million to CTE research to the National Institute of Health which they would be paying over a period of time.

The research study conducted by Dr. Ann McKee took off in 2017, researchers examined the brains of 202 deceased former football players at all levels. Nearly 88 percent of all the brains, 177, had CTE. As these astonishing findings published on July 25, 2017, the NFL quickly retracted the contract days later and decided they were going to wait until it expired at the end of August with $18 million still left to be donated by the NFL. This sudden announcement raised eyebrows throughout the medical and athletic communities. Questions were raised such as, what more was the NFL afraid they would find? Was it something the NFL had already known about that they withheld and feared Dr. Mckee was about to uncover? Without further funding from the NFL she would be forced to cease her research. Without her continuing her research, the NFL would not be forced to change the way concussion protocol is now.

Correlation Between Concussions and the Sport of Football. (2021, Mar 03). Retrieved from https://studymoose.com/correlation-between-concussions-and-the-sport-of-football-essay 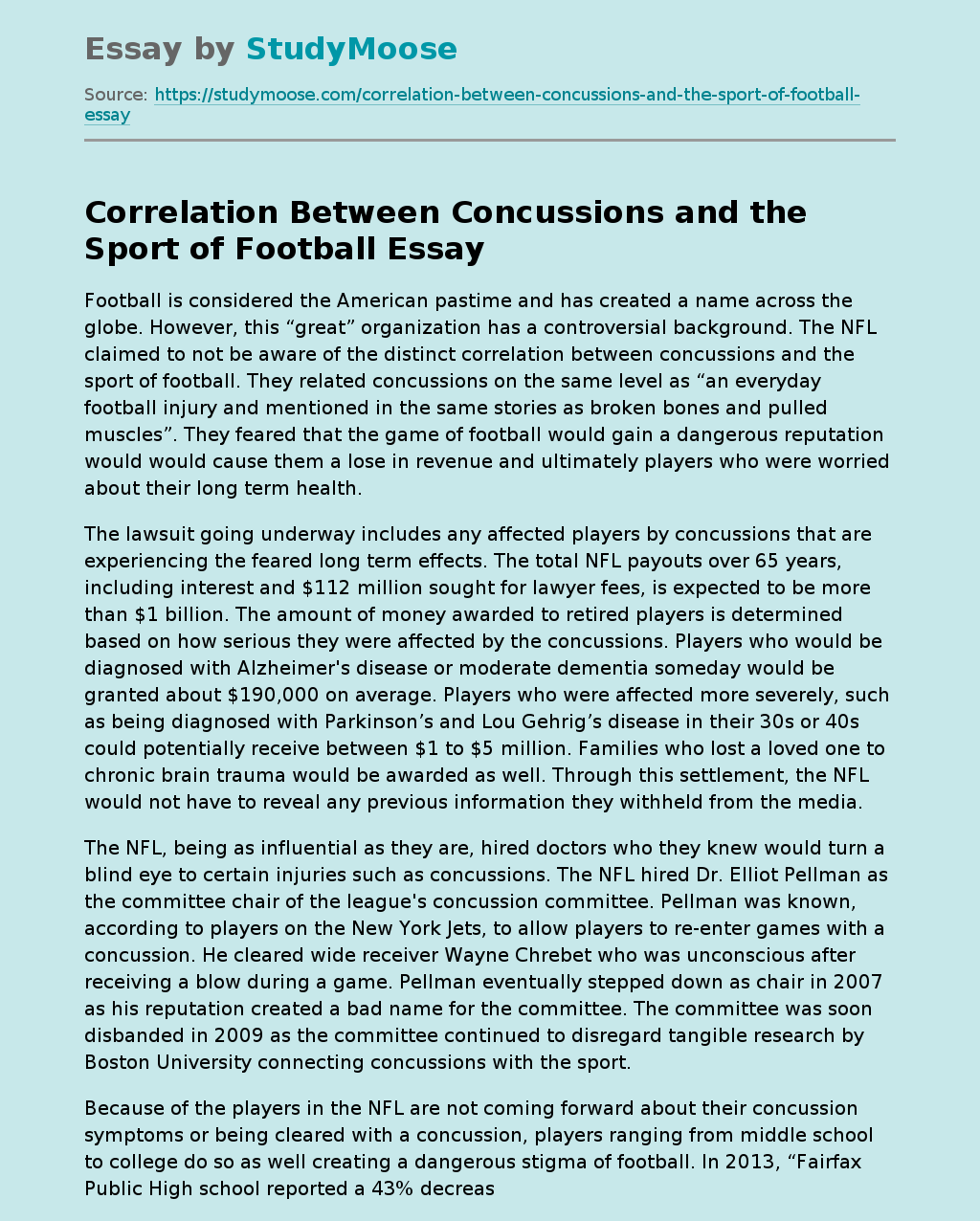