Cooking as an Art Form Essay

Food, cooking, and whatever related to these themes are usually considered as an art because food is an everyday item that has a wide meaning for all people. Food can be considered as an art; for example: the decoration of a food, the way a food is constructed in the plates, or even the way many different foods are being mixed in order to create a new food. Sometimes even people consider the arrangement of plates in a table as an art.

Don't use plagiarized sources.
Get Your Custom Essay on Cooking as an Art Form Just from $13,9/Page

This is called Table Art. Brillat-Savarin in his book, “The physiology of taste” states that cooking is the oldest of all arts.

He says that Adam was born hungry and even a new born child first looks for become feed by his nurse right after he comes to new world (Physiology of taste, 300). He also believes that cooking and food is the finest art that has had the most influence on humans’ civilization (300). Food is one of the fewest things in whole world that almost everyone becomes satisfied with.

When people eat, a kind of satisfaction and pleasure make them happy. And whatever can make a person happy could be considered as an art.

Brillat-Savarin says that the knowledge of Gastronomy is important for everyone. “There is this special advantage in their gastronomical knowledge, that they attain through it a completely personal note in the way their table is maintained; they are able to supervise up to a certain point the arrangements which they must then entrust to others, and they may even direct them occasionally”. Preparation of food is as much important as the food itself. Only a good cook can prepare a food in its best way and the final product is what everyone would like to try.

Brillat-Savarin in his book explains how a skilled cook can make a fish that become an immense source of pleasure. He explains different ways it can be prepared, served in whole, cut in fillets or sliced, whether boiled or fried, cold or hot. And what he believes is that it would be always acceptable (physiology of taste, 91). Sometimes only professional cooks can make an astonishing dish because every one does not have the skill and techniques of preparation of a dish.

For example when John Barlow wanted to try the ear part of the pig he found it a little disgusting before he saw the dish but after they prepare his dish he said: “The culinary art, I guess, often involve artifice. Things are cooked so as to disguise their ugly origins. An oxtail, for example, doesn’t really look like an ox’s tail; it looks brown and glazed and beautiful, like a slow-roasted half-brogue” (Everything but the squeal, 208). Savarin interestingly explains the different usage of sugar in his book and he describes how skillful a man should be in order to mix sugar with different other things to prepare a good product.

For instance, sugar mixed with water that is refreshing and healthy, mixed with wine which produces cordials, or mixed with flour and eggs, the result is sponge cakes, muffins, and uncountable delicious pastries which are all the product of skillful cook (physiology of taste, 102 & 103). In the Gourmet’s diary of a foodie, it was so amazing when Chef Dani Garci was making fantastic dishes by some simple ingredients, like: Green and red Gazpacho and Ajo Blanco which are traditional dishes of south Spain. The most significant part is that how they take their times to make these dishes.

They are like an art work that an artist put all his time and skill on it to create the best work. It was so amazing when he was making those tomato skins which were frozen in nitrogen. He was using all his skill to make them and coat them with red color. Food and cooking just same as music can inspire people. Usually when people listen to music they like to dance. It is the inspiration of music and brings people together to dance. Food and cooking do the same thing as music does. Gourmands are people who are fond of good eating and Gourmandism has an important effect in our social life.

It spreads the spirit of entertainment and friendship which brings together different kinds of people, make a friendly atmosphere that people mingle and melt in to conversation, and vanish the inequalities of position and breeding (physiology of taste, 153). Also it will motivate the host to do his best in order to make the best table for his guests and take care of them. The host uses his knowledge and techniques to please his guests.

Brillat-Savarin states,” any preparation which springs from a high intelligence demands explicit praise, and a tactful expression of appreciation must always be made whenever it is plain that there is any attempt to please” (153). Savarin explains the origin of the table in his book and he brings the note that one of the most important and strong laws of human being is to respect for any one with whom one has shared bread and salt.

Savarin by his explanations believes that truffle is the diamond of the art of cookery (physiology of taste, 95). The art of food and cooking is really one of the greatest works by a human being in history. The power of table, unbelievable different tastes, techniques of preparation, and all other aspects that concern about food and cooking should really considered as an art.

John Barlow in his book “Everything but the squeal”, demonstrates the power of table and how a table can bring people around the table. Indeed, it is like a movie scene when he was sitting next to a family and he noticed that how they stare down at their table before they start eating, he says their elbows were raised and explains how the table was prepared and arranged, the way the forks and knives were next to dishes (Barlow, 145). In fact, these kinds of excitements are the result of foods and cooking’s art.

In Gourmet’s diary of foodie, there is a connection between the traditional foods of gypsies and the art and skill of cooking. Manuel Valencia who is a chef and author wrote a book about the traditional gypsy foods. He explains what constitute gypsy foods in his books. In the video it is really interesting to see how they cook while they are dancing and how they manage the table and guests. It is the art of gypsies that can entertain their guests and serve them delicious foods by simple ingredients. They prepare nice dishes with the lowest costs and of course this would not be done only if you are a professional cook.

Also I noticed that how they prepare Iberico Hams in Spain. It is said in the video that from the dehesa to the table will take 4 years. So what do they do during these years is all about preparing the most delicious ham in the world which obviously is so expensive. To conclude this, it is important to know that cooking and whatever is related to foods and cooking is one of the finest arts conceived by human and it should be considered as art in all aspects and themes of cooking, from preparing to eating.

Cooking as an Art Form. (2017, Mar 24). Retrieved from https://studymoose.com/cooking-as-an-art-form-essay 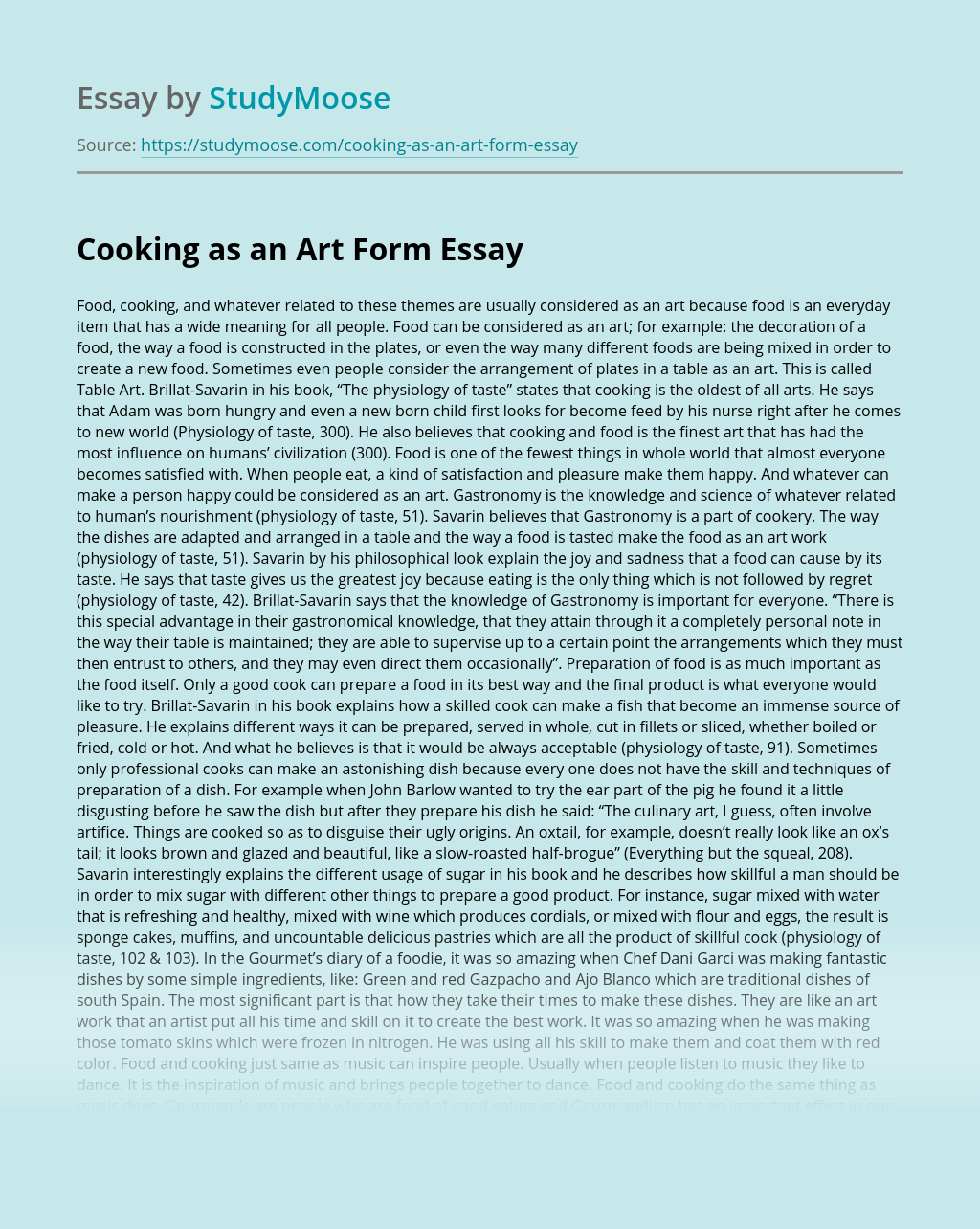 Author background Chris Kyle is a former rodeo star, and a former Navy SEAL who served in the United States Navy from 1999 to 2009 and is the author of the novel American Sniper. Kyle ended his rodeo career when he fell off a bronco and broke his hand, he ended up dropping out of... VIEW ESSAY

View sample
Araby and The Necklace

Abrahamson Takeshi April 3, 2019 EN 210-01 Dr. Schreiner Desire: An everlasting quest for more An Exegesis of “Araby” (“James Joyce” 1914) and “The Necklace” (“Guy de Maupassant” 1884) The fantastic aspect about reading literature is that we are able to relate our own experiences with the experiences of the characters in the story. Each... VIEW ESSAY

View sample
My Most Valuable Possessions

The world today is full of ways to keeps us busy, distracted, and stressed. We all have to find ways to manage these in our lives, often this happens because of special items in our lives that have a special importance to us. Maybe these items are very different from person to person. For me,... VIEW ESSAY

The way a person writes as well as the words he or she uses depicts the person’s background. This may sometimes expose a person into trouble when it comes to academic works. According to Cameron, Zhao, and McHugh (2012), while the most scientific publications are in English, the majority of writers are non-native English speakers... VIEW ESSAY