Malunggay ( Moringga Oleifera ) as an effective substitute for cooking oil

Many Filipinos suffer from different kinds of diseases; one of these is heart disease. According to the Philippine Society of Hypertension President Dr. Morales (2012), of all the deaths here in the Philippines 30% are caused by diseases in the heart. Filipinos are fond of eating greasy foods that have high fat content, which in most cases causes high cholesterol and high blood pressure. Both of these may lead to heart failure because they promote fat build up in the arteries according to nhlbi.

Don’t waste time
Get a verified expert to help you with Malunggay ( Moringga Oleifera ) as an effective substitute for cooking oil
Hire verified expert
$35.80 for a 2-page paper

nih.gov (2011). Madehow.com (2013) stated that oil has been around since 3000 B.C. when the southern Europeans discovered the extraction of oil from olives. Oil is one of the most common and necessary ingredients that are seen inside the kitchen. It is used for cooking, dressings and dips.

There are many types of oils available in the market such as canola oil, olive oil and palm oil. There are also many ingredients out there that may be used to make oil but the researchers of this study have decided to make use of malunggay (Moringa Oleifera).

Malunggay (Moringa oleifera) is a popular plant in the Philippines mostly added to Filipino foods, like tinola, diningding and monggo, to enhance flavor and add necessary nutrients.

It has also been used as herbal medicine because of its nutritional values. It contains amino acids, vitamins and minerals. Also, according to Philippineherbalmedicine.org, this plant is anti-diabetic and anti-tumor. As human beings, with common sense, Filipinos aim to find better and cheaper ways to buy or produce things.

Malunggay (Moringa oleifera), found in almost all Filipino’s backyard and only cost a minimum of 5php a stem, will be used in order to produce a healthier and cheaper oil out of its seeds.

A research conducted in Thailand (2007) confirmed that Malunggay (Moringa oleifera) contain antioxidant substance that lower the levels of fat build up in blood lipids. The researchers fed rabbits, which had high cholesterol, with Malunggay (Moring oleifera) for 12 straight days. The researchers observed that the blood cholesterol levels of the rabbits compared to their initial levels has reduced accompanied by around 50% of training atherosclerotic plaques.

The powder produced was dispersed in 1% solution of sodium metabisulphate for 24 hours and was mixed in acetone. The mixture was then fed to rats that went through fasting for 12 hours but were allowed to hydrate with water. After the experiment, the researchers compared the glucose levels of the rats before and after the feeding. The results gathered stated that the rats’ blood sugar levels reduced to around 30% to 40% after feeding with the mixture made out of Malunggay (Moringa oleifera), sodium metabisulphate and acetone.

Another researcher, a Japanese businessman, Mitsuo Shoji studied the medicinal value of Malunggay (Moringa oleifera) for 30 years. He started the conduction of this research after he has read a passage in the Bible that talked about a tree that cures all kinds of diseases. It was difficult for him to find the said biblical tree. But when he learned and found out that Malunggay (Moringa oleifera) can cure a lot of diseases, he recognized its tree as the tree written in the Bible. Using just its leaves and seeds, he created tea that can help people with ailments. The leaves were used to cure wounds, headaches, gastric ulcer and diarrhea. While the seeds were added to aid rheumatism, gout, cramp, STDs, urinary diseases and others.

These are very nutritious for these consist of amino acids, protein, beta-carotene, iron, calcium, potassium, vitamins A, B and C. Also sometimes, the leaves are dried and powdered to produce food supplements that can be added to dishes to provide essential nutrients, especially for kids who are not fond of eating vegetables. Likewise, its seeds and pods are put in many dishes or are eaten raw like fresh salads. Both of these cure erectile dysfunction and prolong activities involving sex. The Malunggay (Moringa oleifera) seeds can provide at least 40% of oil known to as Ben oil.

This can be used as cooking oil or cold-pressed oil for perfumes and cosmetics because of its, surprisingly, long shelf life. According also to en.wikipedia.org, Malunggay (Moringa oleifera) trees have been used to fight malnutrition among infants and pregnant women in third world countries. Four NGOs— Trees for Life International Church World Service, Educational Concerns for Hunger Organization, and Volunteer Partnerships for West Africa, in particular— have advocated Moringa as “natural nutrition for the tropics”.

Malunggay (Moringa oleifera) are now so well known that it seems like little doubt of the health benefits when consuming Moringa leaf powder in situations where starvation is imminent. Moringa is especially promising as food source in tropical countries because the tree is in full bloom at the end of the dry season when other foods are typically withered and scarce. Also, in preliminary research, Malunggay (Moringa oleifera) seed powder is being assessed for its potential to make river water “potable “. Research showed that filtering with seed powder may diminish water pollution and bacterial counts.

The process they used went through plant-pharmaceutical laboratories and oil extraction technology to successfully manufacture capsules out of the very well known miracle tree, Malunggay (Moringa oleifera) tree. According to Manila Nature’s Link Corporation (2011), their product, The Life Oil, contains behenic acid from Malunggay (Moringa oleifera) seeds, which makes the skin smoother and sperm more motile, and is concentrated making it much easier for the body to absorb nutrients. The Life Oil is a hundred percent natural, safe and potent.

According to Lukecarl (2011), Malunggay, before, was termed as the poorman’s vegetable but now that evidences show that Malunggay (Moringa oleifera) is nature’s medicine cabinet because of the medicinal benefits that it gives it is now called as the miracle tree and is considered as one of the world’s healthiest vegetable. It is mostly found in tropical places such as the Southeast Asia and Africa. The tree itself is low maintenance, meaning, it requires little care. Some of its parts are turned into ingredients to make food, medicine and cosmetic products. Malunggay (Moringa oleifera) leaves are good for relieving headache, bleeding, diarrhea, skin fungal and malnutrition. Its seeds are good for deworming and curing liver and spleen problems. These could also relieve arthritis, STDs or Sexually Transmitted Diseases, urinary problems and epilepsy.

As stated on biotechforlife.com.ph, Malunggay (Moringa oleifera) trees are grown and used as a living fence. Its leaves can be used as an ingredient in cooking, medicine, pesticide, cleaning agent and animal feeds. Its pods can be, likewise, used in making food and medicine. Its seeds can be used to extract oil that is edible or is safe to be used in cosmetics because of its antioxidant properties. The seeds can also purify dirty water by attaching to the bacteria and pulling it down the bottom of the container. Malunggay (Moringa oleifera) flowers can be, once again, used as a medicine and health drink. Lastly, the roots, bark and gums are also used to make natural medicine. According to Artie Sy (2012), because of the many uses of the different parts of a Malunggay (Moringa oleifera) tree it has been called as “The Miracle Tree”.

Here in the Philippines, Filipinos call this tree as “Malunggay” while in Britain, the British people call this as “The Drumstick Tree” because of its long and thin branches that resemble drumsticks. Studies showed that Malunggay (Moringa oleifera) are rich in the following; vitamin A or beta-carotene, which is good for the eyes, vitamin C, which is for the immune system, Calcium, which is good for strengthening bones and teeth, Potassium, which regulates human organ activities and Iron, which regulates the blood. It contains essential amino acids. It also helps balance out cholesterol and glucose levels. When taken regularly, Malunggay (Moringga oleifera) can strengthen the immune system and stimulate metabolism. Aside from all of these, Malunggay (Moringa oleifera) leaves can improve lactation for lactating mothers and sperm motility.

Malunggay ( Moringga Oleifera ) as an effective substitute for cooking oil. (2016, May 09). Retrieved from http://studymoose.com/malunggay-moringga-oleifera-as-an-effective-substitute-for-cooking-oil-essay 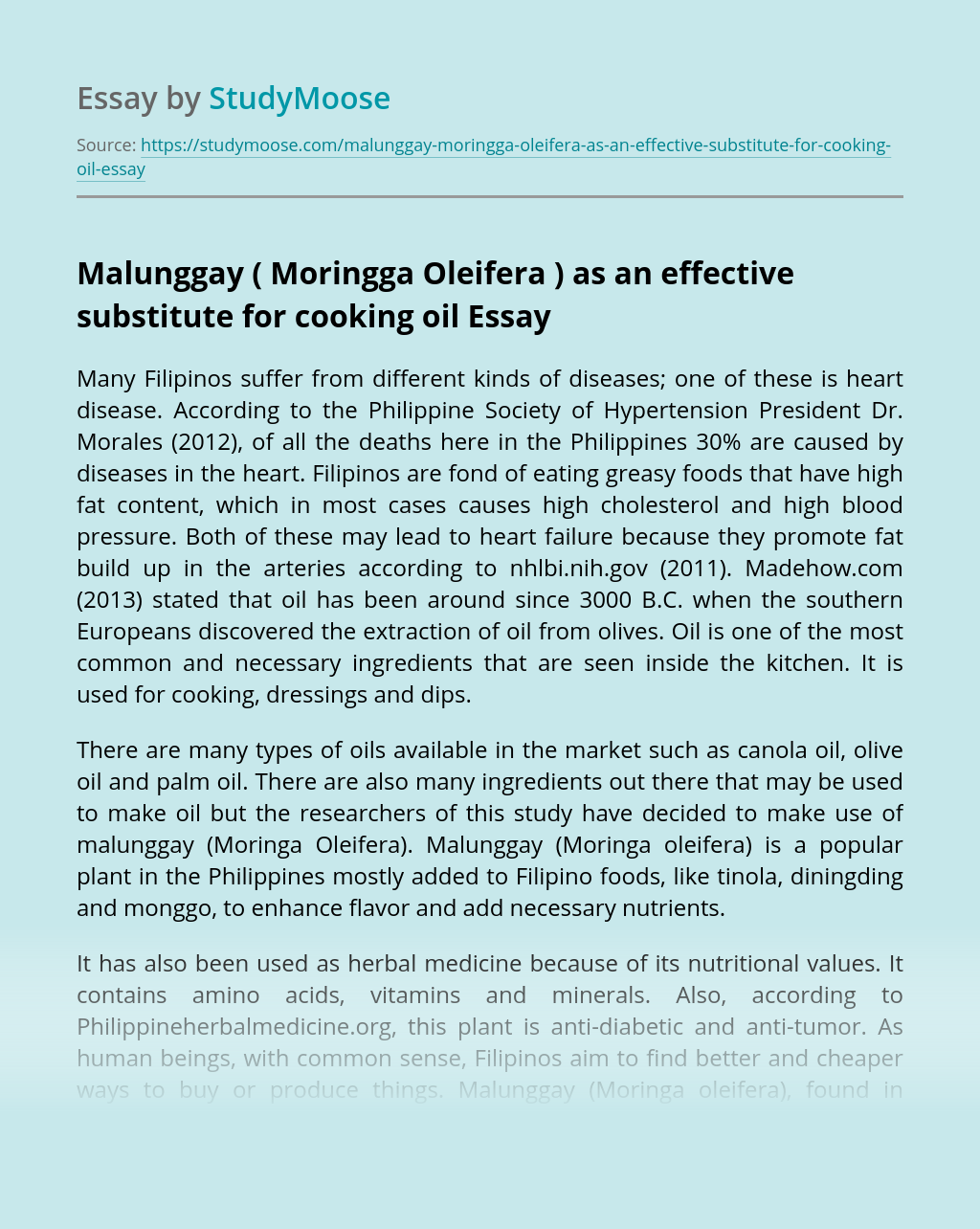 Don’t waste time
Get a verified expert to help you with Malunggay ( Moringga Oleifera ) as an effective substitute for cooking oil
Hire verified expert
$35.80 for a 2-page paper
Stay Safe, Stay Original