The late eighteenth century encompasses a great struggle around the time of the French Revolution, in which several of the rebellious French groups begin to seek stability. Napoleon is one of the most important political figures in particular due to his consolidation of the achievements of the Revolution with Romanticism, and the most controversial when he is seen attempting to establish an empire by conquering most of present-day Europe. Following Napoleon’s downfall against growing coalitions of the enemy, Britain, Austria, Russia, and Prussia agreed to form a Quadruple Alliance for twenty years to preserve whatever settlement they agreed on, while establishing the Congress of Vienna to deal with whatever remaining problems they still had.

Don't use plagiarized sources.
Get Your Custom Essay on Congress of Vienna Just from $13,9/Page

The Congress of Vienna consisted of these four major European powers, whom of which were all intent on creating a balance of power to preserve the peace in Napoleon’s absence; ultimately, the Congress of Vienna would achieve all of their goals, culminating in peace and the prevention of general war for a hundred years.

The Congress of Vienna was an international conference centered around the original countries that had emerged victorious. Notably, each of these countries were involved in the forming of several coalitions against France. Austria was one of Napolean’s earliest victims, having formed the First Coalition with Prussia and then the Second Coalition with Russia as an attempt to contain Revolutionary France. They were represented later in congress by Prince Klemens von Metternich. He was heavily conservative in his actions; however, he was willing to modify his ideals in order to for the conference to be a success. Prussia was an area that remained neutral apart from the times when they were forced into war, and as a result, their representative Prince Karl August von Hardenberg was also very inactive. Intelligent as he was, he simply knew the meaning of compromise. His actions would later become a nod to Russia when he brought about a reunion between Russia and Britain.

Russia exchanged a significant amount of victories with the French before finally seceding from the Second Coalition. Meanwhile, Alexander I alternately befriended and fought against Napoleon on several Adeyoye 2 occasions, only to meet with the other nations in a collaboration against him. Although Alexander helped to to form the Quadruple Alliance, he was more devoted to the interests of Russia. A radical thinker, he was often unpredictable and stood out from the other representatives. Unlike his counterparts, he rejected the idea of altering his ideals to stay true to congress; this would entail conflict for the others later on. Great Britain was also a former ally of France through The Peace of Amiens, but a combination of Napoleon’s confidence and disregard for the partner in this relationship provoked the force of Britain in warfare. Britain elected Robert Stewart, Viscount Castlereagh as their representative in congress.

Castlereagh stands as a more visible example of the nations keeping check over one another when he begins to realize the intentions of Alexander, eventually dedicating himself to a limit on Russia’s control. Ultimately, all of these nations were part of the sixth coalition that defeated him at Leipzig and effectively drove him to exile on the island of Elba, off the coast of central Italy. Some time after congress is formed, Charles Talleyrand of France will take advantage of the rising suspicion toward Alexander and effectively convince the other diplomats to include France as a fifth great power, whereupon his objective will be to keep France in one piece. Promptly after assembling the Congress of Vienna, the powers kept to their intentions of reform. They were united there to resolve any remaining issues that were present. Although it was an easy problem that they faced, one of the most important problems revolved around France.

Even before the victorious coalition had entered Paris, Castlereagh brought about the signing of the Treaty of Chaumont, which provided for the restoration of the Bourbons to the French throne and the contraction of France to its frontiers of 1792. This was accompanied by the creation of non-vindictive boundary settlement as a part of their attempt to keep France calm and satisfied. Furthermore, it evolved into a collective agreement that no single state should be allowed to dominate Europe. Sure enough, a main issue arose concerning the settlement of eastern Europe. Alexander initiated the conflict by requesting Adeyoye 3 control over Poland; Prussia reciprocated by asking for all of Saxony in return for their share of Poland. Whereas Alexander was determined to have all of Poland under his rule, Austria was equally unwilling to surrender their share of Poland or see Prussia grow. It was in this instance that Talleyrand made an alliance with Austria and Britain on behalf of France, forcing Alexander to yield.

In his attempt to keep France unified, Talleyrand would exploit the suspicions of the other leading forces; however, this separation would prove to be only temporary with the arrival of another large problem. The French army was still loyal to their former emperor, and many of the French people were beginning to grow weary of the restored Bourbons. Just when the coalition seemed to be dissolving in Vienna, Napoleon seized the opportunity and returned to France, where he was received by his people. In response to existing systems, Napoleon entered promising a liberal constitution and a peaceful foreign policy; however, the allies were not convinced. As a result, he was quickly dealt with as an outlaw and forced into exile on Saint Helena, a tiny Atlantic Island off the coast of Africa. The real problem, however, was not Napoleon himself but the propaganda that stirred around congress because of him in The Hundred Days.

During which, Alexander was able to assemble a Holy Alliance, whereby all of the monarchs would act together in accordance with Christian principles. Alexander believed his proposal would only strengthen international relations while England abstained from it, believing that such extreme political reaction was unnecessary. The overall peace settlement indeed became harsher for France as a result of armies like the ones of the French Revolution and Napoleon overturning the political and social order of much of the continent. As a result, the original four renewed their Quadruple alliance, ruling that the prevention of war was a more favorable outcome than the upheaval and destruction of suppression; they would not punish France but instead try to stabilize it.

After dealing with the majority of their issues, the organization that was originally formed to Adeyoye 4 last for twenty years had profound results overlapping their time for many years. Looking back at past ills, the congress was able to resolve their internal conflict just as well as the external conflict. Alexander quickly grew silent in his radical ways after compromise came about with Austria and Prussia over Poland. France, although deprived of more or less all of the territory that Napoleon conquered, was willing to accept the change because of how well the new international order set them up. Difficult problems were solved reasonably. Rather than having them made by monarchs, treaties were made by states and could last after the death of a monarch.

Furthermore, European leaders were inspired to calculate political and economical powers in new ways that went beyond the simplistic ideas of trade domination that had started most wars; they took into account their natural resources and economies, their systems of education, and the possibility that general growth in agriculture, commerce, and industry would benefit all states and not one at the expense of others. Just as they intended, The Congress of Vienna established a framework for stability and the overall effect was an influence on most of Europe around them. Napoleon would rise to power in France and contend in unwanted domination, only to suffer defeat going against other, more united nations.

Although Spain would not be in the Quadruple Alliance, national resistance to France would drain French strength everywhere else in Europe and hasten Napoleon’s defeat. Rather than picking at the carcass of what was once a great republic, the victors of the Napoleonic Wars would come together to focus on stabilizing Europe after the onslaught of Napoleon. The Congress of Vienna would consist of each nation’s leading politicians, who would keep one another in check while subsequently improving the continent. Their primary goal was to reestablish a balance of power and a sense of peace; ultimately, they were highly successful in doing so. The Vienna settlement was left essentially intact for almost half a century, and general war would cease for a century. 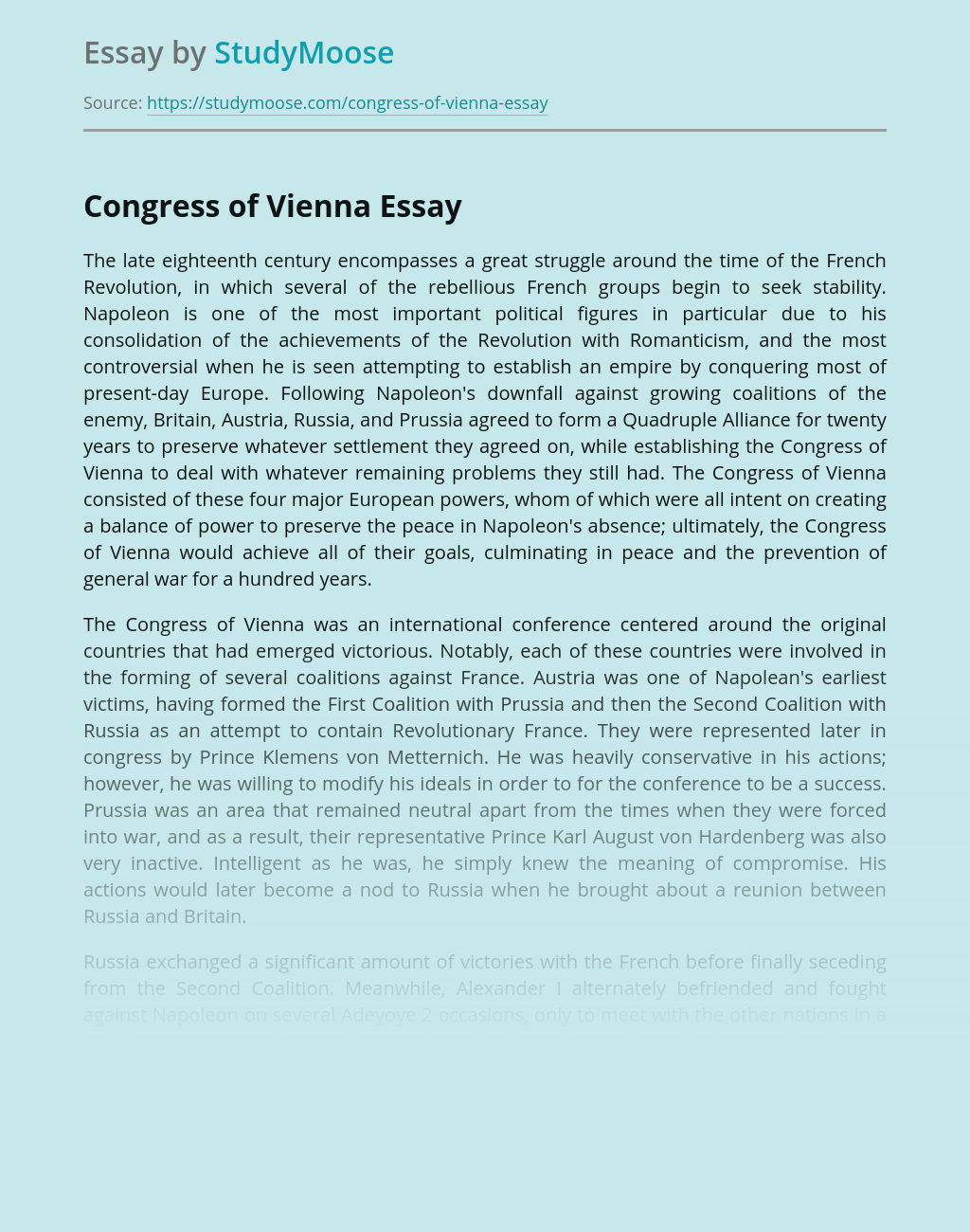 An Issue of Berlin Conference

Rate this post The Berlin Conference is a conference that was held in Berlin in an effort to reach and arrangement among European countries relating to the distribution of items and open market in Central African Territories. The Berlin Conference had the biggest political royal impact throughout the 19th centuries since the conference was where...

What was the underlying cause of World War I?

Rate this post There were many causes of World War I, but the three most important causes were militarism, imperialism, and alliances. World War I started in 1914, and it started off when the Archduke Franz Ferdinand of Austria was assassinated by a Serbian nationalist. This was a global war centered in Europe which started July 28, 1914 and ended November 11, 1918. After World War I ended...

Get Essay
The Age of Exploration and Expansion

Rate this post The Renaissance, the revival of classical art, literature, and learning which took place in Europe in 15th and 16th centuries, sparked imaginations and made people eager to explore. The promise of new riches, such as the spices as silks of the Far East, and the potential discovery of the fabled Northwest Passage...

Rate this post Working and living conditions in the 1800s were bad for both plantation workers and factory workers had it particularly bad. Although there were many similarities in their lives, there were many differences as well. Nonetheless both jobs were very hard work. The lives of both groups were very much alike. Both worked...

Rate this post Humanism is a term applied to the social philosophy and literary culture of the Western world during the Renaissance movements that spread across Europe. Washington State University, WSU, quoted on the internet: “Of all the practices of Renaissance Europe, nothing is used to distinguish the Renaissance from the Middle Ages more than...