Computer Gaming Addiction is a modern problem in maritime high school students nowadays. It is a challenging part to the teachers to let students stay focused in their everyday lessons. It greatly affects the mental health of every student who is involved in this kind of activity. Computer Gaming Addiction by nature is the irresistible addiction and abusive use of computer for gaming purposes and sometimes even resulting to harmful effects to the part of the user.

Turn in your highest-quality paper
Get a qualified writer to help you with
“ Computer Gaming Addiction ”
Get high-quality paper
NEW! AI matching with writers

Sometimes, gaming addicts even go to as far as spending all their allowance just to satisfy their desire in playing computer games.

It is a demanding part for the teachers and mostly to the parents of the student who is engaged in this kind of activity because they are doing their best in letting their child walk in the right path, but it is somewhat sad to note, that this addiction is disturbing millions of Filipinos and their families in every feature of their life.

The main areas affected include school, family and relationships.

Computer -is a programmable machine designed to  automatically carry out a sequence of  arithmetic or logical operations. The  particular sequence of operations can be changed readily, allowing the computer to  solve more than one kind of problem.

Gaming -is the practice of playing computer games or  role playing games. The act of playing for stakes in the hope of winning.

Addiction -has been defined as physical and/or

Psychological dependence on psychoactive substances which cross the blood-brain barrier once ingested, temporarily altering the chemical milieu of the brain. Addiction can also be viewed as a continued involvement with a substance or activity despite the negative consequences associated with it.

Maritime, relating to the sea, shipping, sailing in ships  or living and working at sea.

Students – are someone who studies at a school, college or in a university.

Social isolation is the act of withdrawing from society in  general. There is usually not much interaction with other people, illnesses and phobias are major factors in social isolation. Social Isolation can contribute toward many emotional, behavioral and physical disorders including: heightened anxiety, panic attacks, eating disorders, addictions, substance abuse, violent behavior and overall disease.

Habit -is an action or pattern of behavior that is repeated so often that it becomes typical of somebody, although he or she may be unaware of it.

Family, basic social group united through bonds of kinship or marriage, present in all societies. Ideally, the family provides its members with protection, companionship, security, and socialization. The structure of the family and the needs that the family fulfills vary from society to society.

Computer game addiction is a worrying aspect of the modern-day technologically able youth. Many children spend hours a day on computers, so much so that computers have become a primary source of entertainment for them, as well as a convenient baby-sitter.

Many young people suffering from shyness also risk becoming addicted to computers. Success with computers provides them with the self-confidence they lack in their personal lives. Shy youngsters who take refuge in the computer may fail to learn and practice important social skills needed later in life.

If history is an accurate gauge, computer games will continue to follow societal trends in the 21st century. One dominant theme in the modern world is the rapid spread of technology, which is having a great impact on children’s toys and computer games. The great strides in computer chip technology over the last several decades have made electronic games and toys more powerful and affordable every year.

These famous computer games are not only popular with children but also with millions of teenagers and adults, which greatly increases their reach and overall popularity. Total annual sales of home video game systems—such as Nintendo GameCube and Game Boy, Sony PlayStation, and Microsoft Xbox—and related software passed $10 billion in the first few years of the 21st century in the United States, and the industry continues to expand.

The Effects of Computer Games Addiction

Putting the Real World Aside

Computer games addiction has no physical component or objective diagnosis, but many of the consequences are similar to alcoholism or drug addiction. Some addicts allow jobs, relationships and academic careers to languish or collapse in order to spend more time playing their favorite games. Gamers who become entrenched in excessive daily gaming routines can find it difficult to make room for much else in life.

Computer games addicts tend to isolate themselves from normal, face-to-face human contact. Some of the most addictive games are found online, where the player competes and cooperate with others around the world. These online relationships online can eventually crowd out more intimate, real-life ones.

The sheer amount of time many addicts spend playing—100 hours a week or more, in some cases—inevitably leads to decreased job or academic performance. Late nights and days spent obsessing over the game make the addict unable to perform as well as he would be able to otherwise. Some gamers spend real money on virtual products to make their characters more powerful or distinctive, reducing the money available for necessities.

Aside from academic obligations, children and young people have relatively few responsibilities to shirk by playing games. When an adult with dependents becomes addicted to computer games, however, the addiction can shatter a family. Game obsession takes away from time spent with family, which can lead to neglect of children and weakening of marriage bonds.

Computer games addiction describes an ingrained set of habits rather than a true addiction. It can be concomitant with depression or mental illnesses such as bipolar disorder or borderline personality disorder. Therapy, treatment programs and/or medication for the underlying disorder can be helpful. The earlier treatment is sought, the greater the chance it will be successful.

Computer game playing may have several advantages. Proficiency in video games can develop the self-esteem of the player. It can develop eye-hand coordination, and can have other educational features. More sophisticated games can help players to develop other skills, and recent developments have built in aspects of physical exercise — although this may have limited appeal to gamers.

The reality of popular culture is that we are more and more dependent on technology. A generation ago, computers were complicated and difficult to use, but modern computers are more user-friendly, and are relatively easy and enjoyable for the majority of people to use. Video games allow people to have positive experiences of using computers that can provide transferable skills for using computers for a variety of purposes.

Bearing in mind the potential positive effects of video game playing, to label the activity an addiction without sufficient evidence and interpretive guidelines about what constitutes addiction could deter many children and their parents who could possibly benefit from video games. There is wide variation in video games, and although some appear to have harmful effects, particularly through the promotion of violence and other anti-social behaviors, this is a function of the content of specific games, rather than a characteristic of video games. Video games as a medium have equal potential to develop positive social skills, or to provide benign forms of entertainment — although these may not be as easily marketable to kids.

It’s a tough habit to kick. It’s not like you can just stop using the computer altogether. You need it for school and to stay in touch with your friends. If you’re a gamer, most of your friends may also be gamers, meaning that you would not have anyone to hang out with if you stopped playing completely.

One of the primary concerns with violence in video games is that gaming is not passive. In order to play and win, the player has to be the aggressor. Rather than watching violence, as he might do on television, he’s committing the violent acts. Most researchers acknowledge that this kind of active participation affects a person’s thought patterns, at least in the short term. 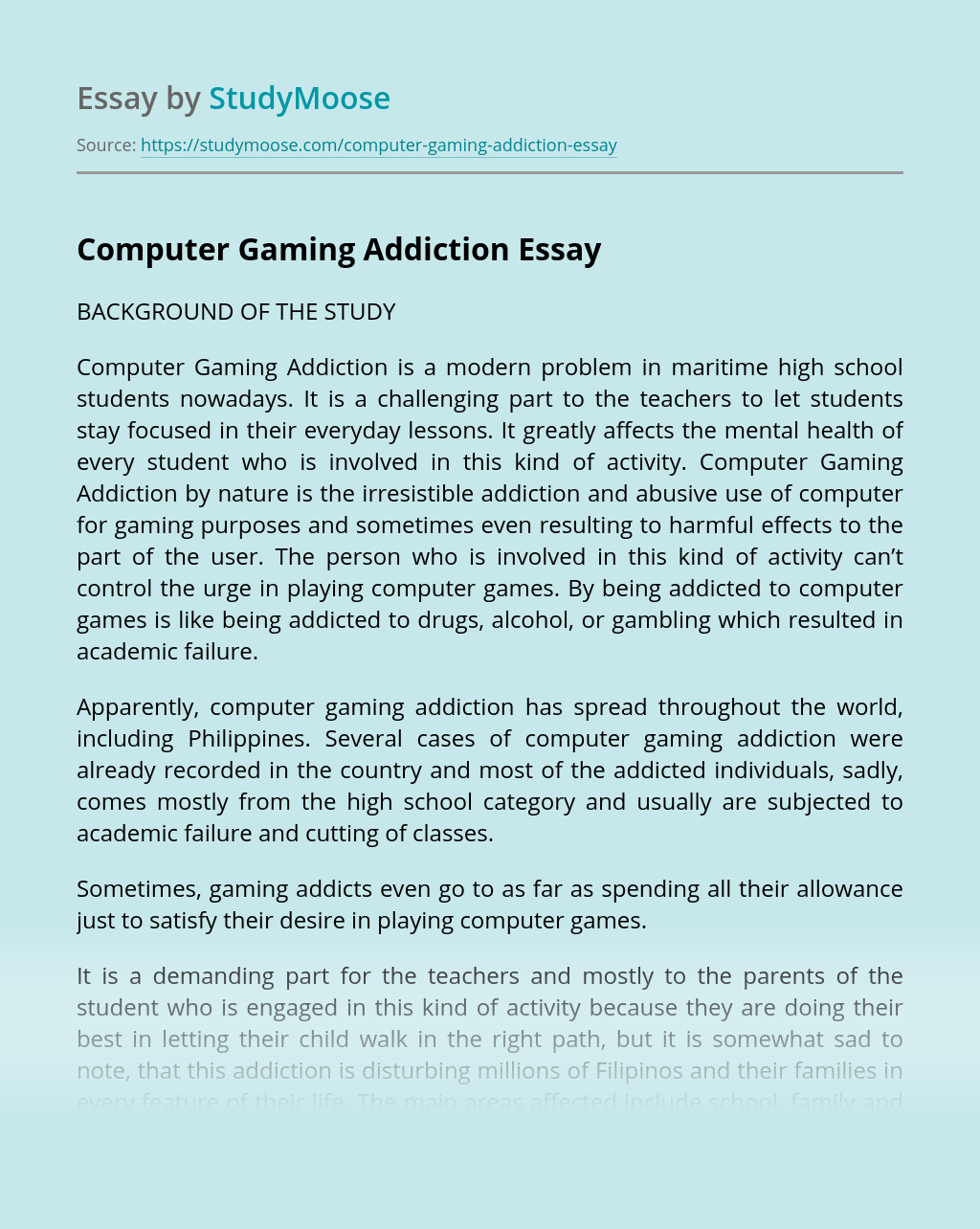 Turn in your highest-quality paper
Get a qualified writer to help you with
“ Computer Gaming Addiction ”
Get high-quality paper
Helping students since 2015
Stay Safe, Stay Original