Comparison of the Three Sisters and Antigone

In the plays The Three Sisters by Anton Chekov and Antigone by Sophocles, dialogue plays a key role in the characterization of the protagonists, because dialogue can act as a form of indirect characterization. The Three Sisters is a play set in the early 1900s, and is about three sisters who try to lead meaningful lives which are surrounded by people constantly distracting them from the passage of time and their longing to return to their home country of Moscow.

Antigone is a Greek tragedy written approximately two thousand years ago and is about family betrayal and honor and how the protagonist, Antigone, goes against King Kreon who is her uncle.

Don't use plagiarized sources. Get your custom essay on
“ Comparison of the Three Sisters and Antigone ”
Get custom paper
NEW! smart matching with writer

Even though these plays were written in very different time periods, dialogue between the protagonists and other characters in each play is important for characterization of the protagonist.

In plays dialogue is the most significant aspect of the writing, because it is the most effective method of conveying character traits, or characterization. Even though Antigone and The Three Sisters were written roughly two thousand years apart, the plays have very similar indirect characterization built into the dialogue.

For example in The Three Sisters Olga has a dialogue with Masha on page two which states: “Olga: Masha. Please don’t whistle.

Please. Masha: . . . Don’t whistle? Olga: Please. My head is splitting, I’ve grown old working, and I’m sorry if I seem to carp, but I need some quiet, you know . . .? Masha: . . . some quiet. ” This quote shows characterization of Olga and Masha who are two out of the three protagonists. Olga’s annoyance and her comment of how she has grown old working tells the reader or audience how she is sick of her work and her negative attitude even at her sister’s birthday party.

When Masha responds to Olga by repeating specific phrases it displays her absentminded thoughtfulness which is often displayed by her short answers and how she often trails off which is shown by three dots in succession (…) in the book. In Antigone the protagonist Antigone’s stubbornness and loyalty to her family is shown from her first conversation with her sister Ismene. They talk about burying their brother even though the king prohibited it on page twenty two: “Antigone: He’s my brother and yours too; and whether you will or not, I’ll stand by him.

Ismene: Do you dare, despite Kreon? Antigone: He cannot keep me from my own. ” In this quote it shows Antigone’s loyalty in the first line and her stubbornness in the third. In the third line she is in essence saying that Kreon cannot stop her. Antigone’s method of indirect characterization is similar to that of A Doll’s House despite the very different time in which they were written. In the plays the characterization which occurs in dialogue can convey different parts of the protagonists’ personality depending on who they are speaking with.

For instance when Antigone is speaks with her sister the reader can see the resentment which Antigone has for her sister Ismene, because Ismene did not help her to bury her brother’s body. Although in the play, the dialogue Antigone often has with the king Kreon displays her stubbornness and defiance. One example of this is on page thirty nine line five hundred forty nine is when Kreon says to Antigone, “You still dared break this law? ” and then Antigone responded by saying yes and by telling Kreon that prohibiting the burial of her brother is going against the gods.

In the time of the Greeks it was unthinkable to go against the gods, so the fact that she told him this means that she severely dislikes him and will go against him with every fiber of her being. In The Three Sisters on page five Irena, the youngest sister, has a conversation with Chebutykin who is a family friend and she tells him that she needs work in her life which characterizes how she is dissatisfied with her life but more importantly it shows her naivete and her oversimplification of life. When the sisters have dialogue amongst themselves they have more casual conversation which shows their personalities from a different angle.

On page three all three of the sisters are talking but the dialogue mostly characterizes Olga when she says, “. . . I have grown old. I have grown very old. And thin-from being cross all of the time . . . with the girls at the gymnasium. Of whom I today am free. Thank God. And make me younger. ” Even though she is only twenty eight she feels like the peak of her life has passed and she feels that she is too old. She also states that she has grown thin from being “cross” all the time, cross means mad, this is an example of indirect characterization because the character said it to her sisters.

Comparison of the Three Sisters and Antigone. (2020, Jun 01). Retrieved from https://studymoose.com/comparison-three-sisters-antigone-new-essay 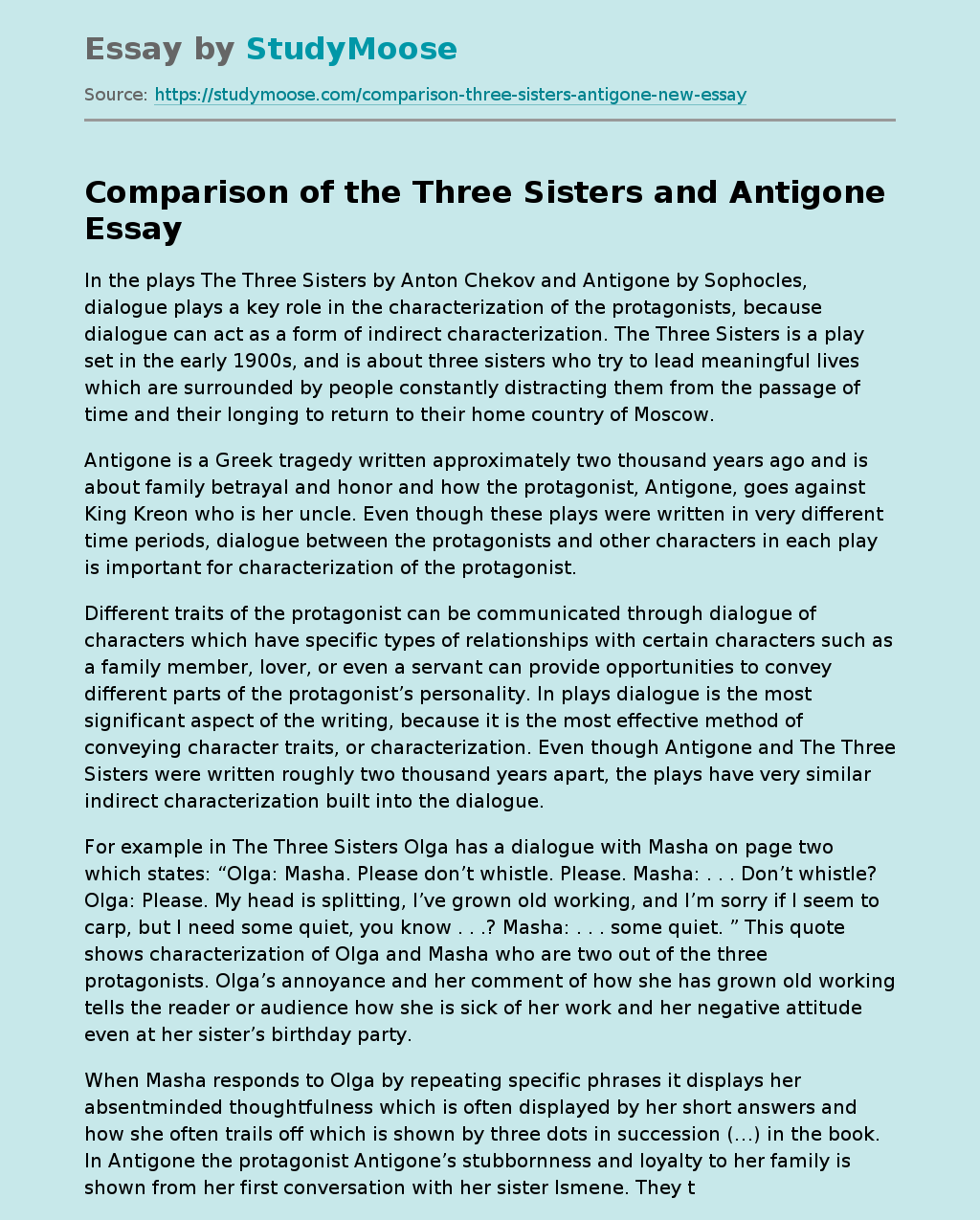