The Rez Sisters by Tomson Highway

Tomson Highway’s The Rez Sisters is the play about seven related women who live on a reserve and go TO THE BIGGEST BINGO IN THE WORLD in Toronto. The play takes place during a summer of 1986, on the fictional Wasaychigan Hill Indian Reserve on Manitoulin Island, Ontario, and provides the portrait of seven Rez sisters who are all related by birth or marriage. The distinct personalities of each character are used to offer the audience a different attitude towards life and their role on the reservation.

Don't use plagiarized sources. Get your custom essay on
“ The Rez Sisters by Tomson Highway ”
Get custom paper
NEW! smart matching with writer

The seven women organize a road trip from their Indian reserve to Toronto to participate in THE BIGGEST BINGO IN THE WORLD; each woman dreaming of winning the bingo jackpot and what the life changing fortunes it will bring them. There are several symbols in the book, including Bingo, Nanabush, and the comparison of the numbers 7 and 3. The symbols reinforce the sisters’ lacking physical needs and their powerlessness to destruction around them. One of the key symbols in the play is the reoccurring number seven and multiples of it.

The number seven holds special significance as it is supposedly the seventh generation that will rise again and the number seven relates to the directions of the earth “It is a mystical number in Cree mythology…” (Johnston, 263). There are seven sisters in The Rez Sisters, all related by either birth or marriage and one that is an adopted daughter.

One of the sisters is 49 years old while both the disabled Zhaboonigan and Philomena calm themselves down by counting to 14. The play follows the seven sisters as they make a journey to Toronto to try their luck at THE BIGGEST BINGO IN THE WORLD. They all have plans of furthering their lives with the jackpot money, but unfortunately their lucky number B14 is not called: “the Bingo Master calls out number after number – but not the B 14” (The Rez Sisters, 1160). The number three is also referred to often, always with reference to Christianity.

The number three also patterns Philomena’s description of Bingo Betty is also sacramental. The number three represents the white and Christian majority the same way seven represents the native spirituality of the aboriginal peoples. In English North America, there are three wishes, three guesses, and three strikes. And In sacramental terms, it is represented by the holy trinity: the father, son, and Holy Spirit. The numbers seven and three represent the “cultural collision” (Nothof) of the aboriginals people and the Caucasian populations. Nothof states that the reserve functions as a representation of aboriginal communities across the country looking out on the obvious indicators of an economically powerless society that is looking at signs of self-destruction and of self-preservation (Nothof).

The Rez Sisters by Tomson Highway. (2016, Mar 21). Retrieved from https://studymoose.com/the-rez-sisters-by-tomson-highway-essay 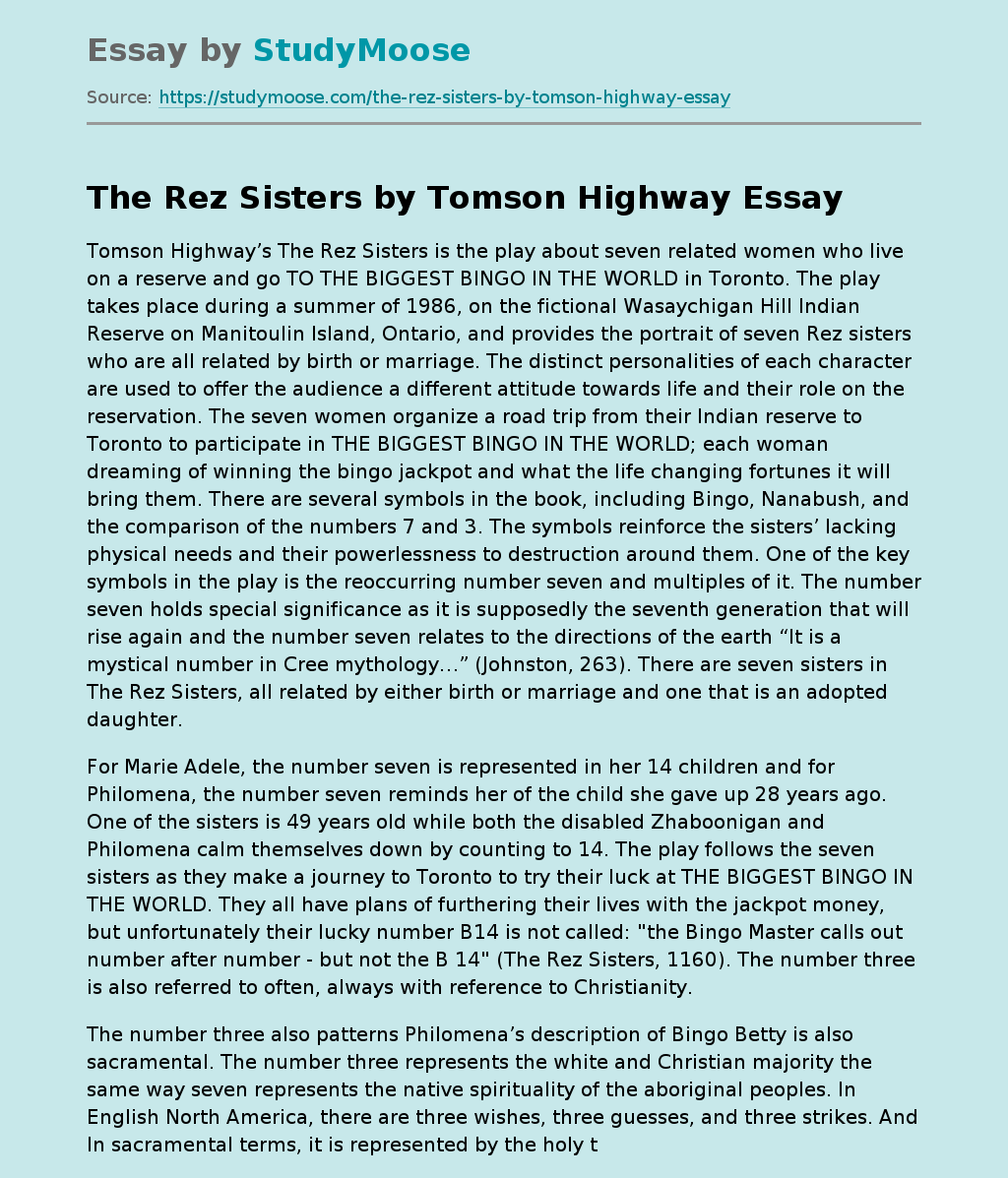