I chose ‘Remember’ because of the depth of the feeling of the sonnet. ‘Remember’ is a sonnet by ‘Christina Rossetti’. A sonnet has a typical regular rhyming scheme. This type of sonnet includes fourteen lines. It was written in the Romantic era, the poet talks to her lover and informs him to remember her when she dies by happiness rather than grief and sorrow. It is largely autobiographical, as she wrote it when she was in her death bed.

Turn in your highest-quality paper
Get a qualified writer to help you with
“ Comparison of Two Poems ”
Get high-quality paper
NEW! AI matching with writer

She also tells him that he will be lonely when she leaves him. The poem ‘Remember’ and ‘A woman to her lover’ both refer back to the Victorian/Romantic era.

In the next line which states the effective phrase ‘Gone far away’, it refers to death, separation and lack of communication between the couple. As readers we realize that ‘Silent land’ is a description of the place that Rossetti is going to. ‘Silent’ in this sentence means that there is neither happiness nor sadness. It is similar to ‘A Woman to Her Lover’ by ‘Christina Walsh’, which talks about a woman talking to her lover about equality and how he should treat her, for her to be his devoted lover.

In line 26 in ‘A woman to her lover’, there is an extended metaphor ‘Laugh with joy’, it suggests harmony and balance between the couple, when her lover treats her with respect.

Physical nearness is used in the third line using phrase ‘When you can no more hold me by the hand’; ‘by the hand’ is used to reflect this. Physical nearness is also referred to in her warning ‘You can no more’ where the consequences to that would be her departure to the ‘Silent land’. The poet uses personal pronoun ‘Me’ to hint to us that the man is the leader in this relationship.

The word ‘Nor’ in the phrase ‘Nor I half turn to go yet turning stay’ reflects uncertainty of the time of death ever-present reality; it also verifies to the husband that the poet will leave him forever and never come back. The personal pronoun word ‘You’ in the phrase ‘You tell me of our future that you planned’, proves to us that there is great dependence on the man as the decision maker in this relationship, because he told her of their future. The reference to his ability to tell the future adds more emphasis to his superiority in this relationship.

The fact that there is a long-term relationship between the couple is conveyed by ‘Our future’. The latter is a clear indication of the long standing relationship the couple enjoyed which lead the poet to refer to ‘Our future’ more so than ‘My future’. There is a shift in focus in this sentence from the poet talking about herself to informing her lover what to do. This is successfully deployed as a result of the change in personal pronouns from ‘Me’ to ‘You’. It is also evident in ‘A woman to her lover’, where there is an effective use of pronouns nearing the end of the poem.

In line 8 the poet confers a sense of hopelessness and that time is running out by informing her husband that ‘It will be late to council then or pray’. The poet is notifying her husband that he will appreciate her presence when she is gone and as a result he will turn to God. ‘Pray’ is a break in the rhyming pattern, it provides a change in focus from selfish to selfless; it is indicated by the choice of personal pronouns as mentioned earlier.

At the beginning of the next sentence the poet begins to state commands concerning her husband by the word ‘Yet’, which hints that the tone of the poet will change. The poet reflects on her wishes using the conditional sentence ‘Yet if’. In the same sentence there is a rapid change in tone from ‘You must remember me’ which was used in the second quatrain to ‘you should forget me’, this now proves that the she is selfless and does not want her husband to grieve over her for a long time, and wants him to move with his life. She goes on to say that it is better not to remember her if he is going to be sad every time he thinks about her.

The effective sentence ‘Do not grieve’ is a command and ‘Pray’ provides evidence that her lover is a religious person. The two powerful words in the sestet ‘Darkness’ and ‘Corruption’ express the horror of physical death at the time. The word ‘Vestige’ means left over. The poet confers her conclusion that he should forget about her and smile rather than remember her and be sad.

I chose ‘First Love’ because it is similar to modern time ideas, although it was written in the 80’s. ‘First Love’ is a poem by ‘John Clare’, it talks about a young man who was the son of a farmer and grew up in a rural area. It mainly shows us how his break up in an early relationship with a young woman called ‘Mary Joyce’ caused him to be deeply affected and he never got over it. The poem has a regular rhyming pattern and an ababcdcd rhyme scheme in all 3 stanzas with equal lengths of stanzas. This reflects his regular pattern of life which is a predictable routine. In other words this means that he will be in a state of shock if something unexpected happens.

Using a metaphor the poet refers to what is on the farm by the phrase ‘Bloomed like a sweet flower’. This is imagery from nature which is a typical characteristic of the Romantic era is also evident in ‘When we two parted’ in line 9 and 10 where metaphorically the dew represents his native feelings. This is also similar to a phrase in the poem ‘When we two parted’ by Lord Byron, which talks about how Lord Byron looks back in time with regret at a broken relationship with a woman whom Byron admired when he was a schoolboy. It is similar in ‘When we two parted’ in line nine and ten where imagery from nature is used in ‘The dew of the morning’ and ‘Sunk chill on my brow’.

The poet’s heart was taken away as soon as he saw Mary-Joyce (the girl he broke up with). The poet’s lack of sophistication and naivety is revealed using repetition in the phrase ‘My face turned pale as deadly pale’, deadly pale here means that his face’s color and expression was as if he was dead. This Phrase is a sign that he is taking this relationship very seriously.

A brilliantly placed rhetorical question ‘What could I ail’ has definitely reflected his bewilderment, as well as it echoes the title. In simple terms he is asking himself ‘what is wrong with me’. Preservation of old ways is present in the poem using the phrase ‘My life and all seemed to turn to clay’, using this phrase we identify the period of time that the poem was written. This means that everything in his life has changed. The poet described how he experienced issues when he saw the beautiful girl and how ‘Blood rushed to my face’. This description also hints that he had health issues, as there are types of diseases that might cause this type of unusual rush.

The use of simile is present when Clare is describing his excitement of watching the girl, using the imagery from nature ‘The trees and bushes round the place seemed midnight at noonday’. The use of imagery from nature is also present in the poem ‘Villegiature’ by ‘Edith Nesbit’ which was written by Edith Nesbit in the late 19th century. The actual word villegiature means holiday or retreat in French. ‘Villegiature’ is a short poem which is about a woman who is being haunted by her former lover. Imagery from nature in ‘Villegiature’ is mentioned in the 8th line ‘Through the blossom climbed and kissed me’. The poet mentioned this description to frame her dream man, as well as it refers to the Romantic era. The word ‘Seemed’ is a sign that he is unsure of what is currently happening to him

The third stanza opens with a rhetorical question asking if ‘Flowers’ are ‘winter’s choice’ emphasizing the fact that the relationship does not grow. We become conscious that the relationship doesn’t develop by the apparent reality that flowers don’t grow in winter. The ‘flowers’ contrast the chill of winter with warmth of summer and also inform us that he is falling in love for the first time. The next line also uses a rhetorical question, but rather to question if ‘love’s bed’ is ‘always snow?’ and wonder how it could be so cold. The first two lines show us that metaphorically speaking he sees himself as ‘Flowers’, whereas his love is ‘Snow’. This is

The poet is wondering about how could his voice be silent, and it is proven using the oxymoron when the poet asks himself whether the girl could hear his ‘Silent voice’. The poet describes his voice as silent to describe how he was deeply affected by the break up. The phrase ‘Love’s appeal to know’ depicts love as an obsession and selfishness.

The word ‘Sweet’ is repeated three times throughout the poem, in the fourth line before the end he uses alliteration with the word sweet to describe deeply ‘So sweet a face’. As readers this makes us believe that he is now obsessed with her and can never get over it. In his attempt to reflect personification of his obsession he uses the phrase ‘My heart has left’, as if his heart can leave its place.

There is also a shift intense from past to present in the last two lines where he first says in the past ‘My heart has left’ and then ‘And can return no more’, this informs us about the final condition that he is left with. Finally to end the poem the poet states the word ‘can’ in the phrase ‘And can return no more’ to hint to us that his heart has taken its own choice and decided not to go back for her. 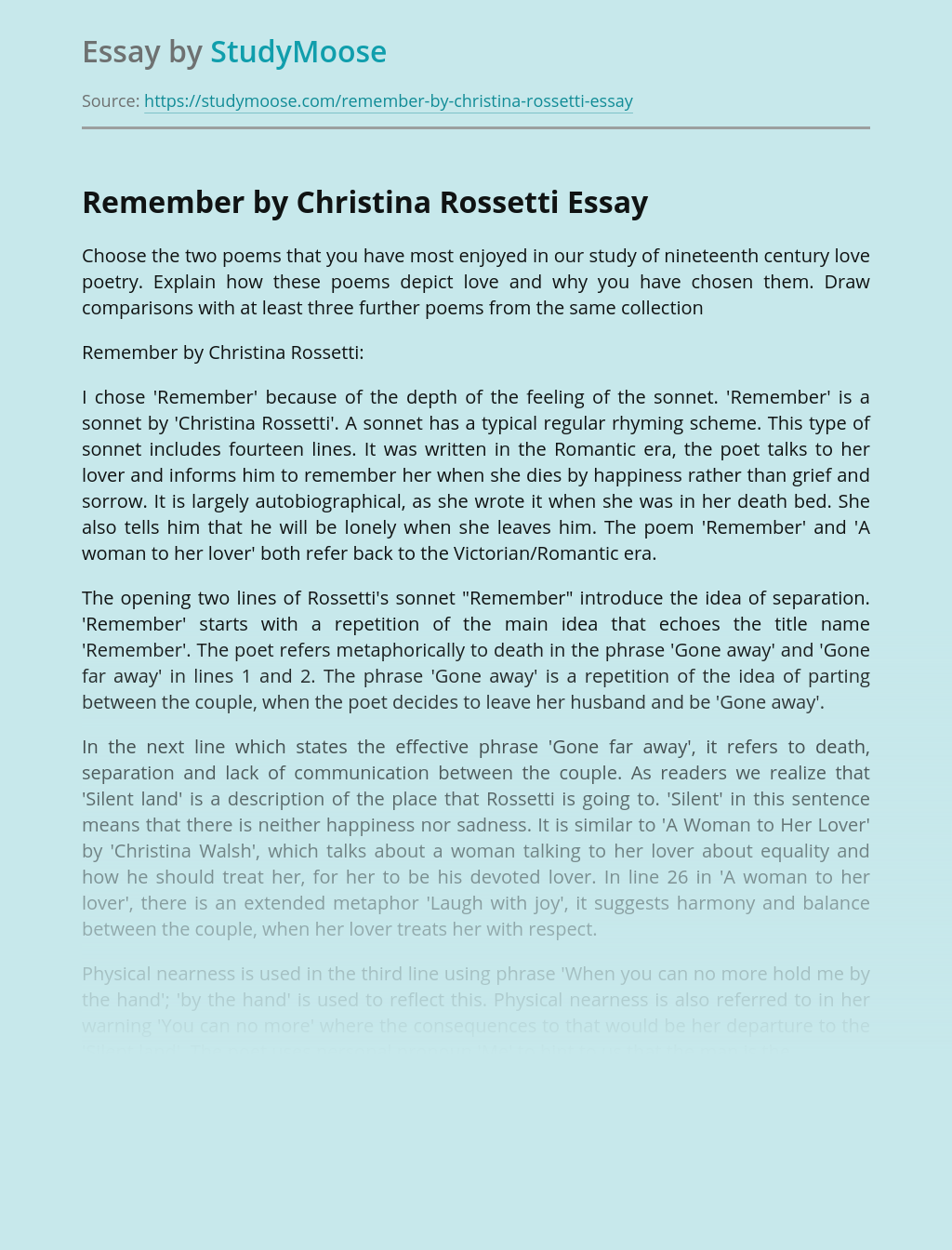 Turn in your highest-quality paper
Get a qualified writer to help you with
“ Comparison of Two Poems ”
Get high-quality paper
Helping students since 2015
Stay Safe, Stay Original