Bronwen Wallace’s poem, “Common Magic,” and Rabindranath Tagore’s poem, “An Ordinary Person,” reveal how ordinary people and events can be special and extraordinary. Additionally, both poems concern specific people to prove that within everyone’s live there can be elements of magic and mystery. In Wallace’s poem people transform through a variety of human experiences, where in Tagore’s poem one seemingly ordinary person is changed through poetry. In both poems authors’ ideas are expressed through a lot of magic imagery.

Turn in your highest-quality paper
Get a qualified writer to help you with
“ Two Poems Comparison ”
Get high-quality paper
NEW! AI matching with writer

In “Common Magic” the speaker shows how common individuals are mysterious to the world, where in “An Ordinary Person” a single human being is changed through time and poetry, through magic imagery.

“Common Magic” VS “An Ordinary Person”

In Wallace’s poem the speaker conveys how seemingly ordinary people can be hiding mysterious and magical elements. This is illustrated through a various number of characters through the poem. For example, a best friend “falls in love” and her “brain turns to water.

” To the world she looks just a normal girl, but being in love makes her another person to the eyes of the speaker. In the meantime, a waitress “floats toward [her]” and she is isolated in her own planet. Moreover, as people move in their own “seasons,” the children “alien liked form” play and move in their own “galaxies.” They live in their fabulous world that once in a while puts a smile in their faces. Furthermore, the song of an old man, who is holding a child in his knee, is stopped when the driver “calls his stop.

” Even though the elder man looks fine, he needs that child to “guide him home.” As the world goes on its everyday routine, everyone manages his or her hidden life.

Role of Magic Imagery in the Poems

In Tagore’s poem the author shows how an ordinary person today can be such an extraordinary individual in another era. The speaker is trying to get across what today is view as a common or normal life while once was “charged with poetry.” Even someone who the world looks up in owe for his achievements in life, someday may be just an average individual like everybody else. Additionally, an ordinary human being who has a normal life and does things his way looks so typical today, but back in those days every word out of his mouth “would be taken in greedily and still wouldn’t be enough.” Because he did things in his own way back then, he looked unusual in people’s eyes — but is just a matter of time until the world catches up with his achievements in life. If the man were to be “resurrected, again made flash” in this lifetime there would be a great “surprise in his eyes” as he looks at the changed world; and how the new world looks at him. He is an ordinary person; nothing special, for everybody he is viewed in a different way from the distance.

In both poems Wallace and Tagore use a lot of magic imagery. Because there is another world beyond the eyes of each person, that makes each one unique. The imagery in Wallace’s poem points out how people are mysterious. In fact, the poet describes the “seasons of life” and how people grow old. The kids are called “alien like form” because of their innocence. Moreover, the speaker describes how people who fall in love are completely in differ planet and their “lips move/making the customary sound,” but it is obvious that they are “merely/words.” Between people unthinking gestures unlock faces before them, and it “reveals the intricate countries deep within the eyes’ and their hidden lives.

Conclusion: Common Ideas of Both Poems

In Tagore’s poem the speaker describes how extraordinary lives might not look as special as the time goes by. Meanwhile, it shows that everyone is changed with poetry, and it is poetry that makes his or her life story seem so different at another existence. Nobody is really ordinary; it depends from point of view they are being looked at that is what makes all the difference. It is evident that no matter how ordinary someone may seem, his or her life can be changed through poetry.

Bronwen Wallace’s poem, “Common Magic,” shows how pople are mysterious to the world, and Rabindranath Tagore’s poem “An Ordinary Person” shows how a normal person is changed through poetry and the magic imagery used illustrates it better. No matter in which part of the world someone lives they sure are matchless and their lives too. 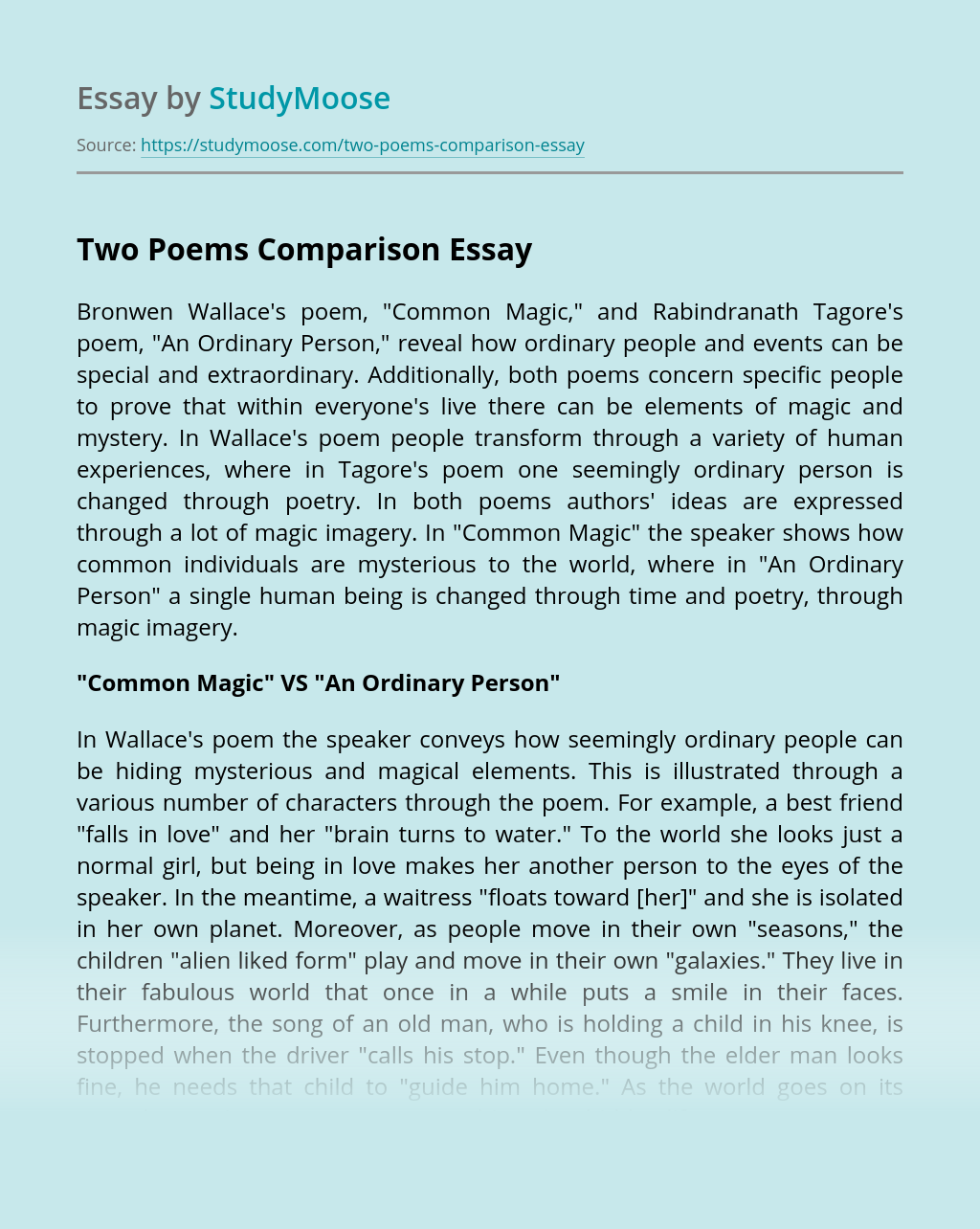 Turn in your highest-quality paper
Get a qualified writer to help you with
“ Two Poems Comparison ”
Get high-quality paper
Helping students since 2015
Stay Safe, Stay Original