Comparison and contrast of Mesopotamia and the Indus Valley

Mesopotamia and the Indus Valley civilizations have long been compared throughout history and were both some of the earliest civilizations in the world. Mesopotamia, also known as, ‘the land between the rivers,’ was named for the triangular area between the Tigris and the Euphrates rivers. This area has been extended and now covers modern day Iraq, adding ancient Assyria and Babylonia to that land. The Indus civilization is often referred to as the Harappan civilization from the first city discovered called Harappa.

Don't use plagiarized sources.
Get Your Custom Essay on Comparison and contrast of Mesopotamia and the Indus Valley Just from $13,9/Page

The Indus civilization existed in the vast river plains of what are now Pakistan and northwestern India between the Indus and Ganges rivers from about 2800 BC to 1800 BC. Though these two territories had many things in common due to their surrounding geographies, they also differed in some fundamental ways such as economy, government, and social system.

The economy of Mesopotamia was mainly agricultural, but also included wool, hair, and leather. The domestication of animals, painting of pottery, and most importantly, agriculture spread to Greece from Mesopotamia.

This agriculture was being jeopardized from the progressing salinization (treating of salt) of the soil, and the weakening of the dikes. This necessitated constant watch employed by the temple and the palace. Silver was used in the Babylonian period, and it was being hoarded as treasure by the palace and the temple. There were three kinds of trade going on in Mesopotamia, one being inner city trade. The second kind was an ongoing trade between foreign cities and trading outposts. The last was the export of industrial goods to sights such as Al Mina at the mouth of the Orontes River in Syria. Items that were exported include textiles made by serfs(servant required to perform labor for his/her lord) and the importing of metal, stone, lumber, spices and perfumes.

The economy of the Indus civilization was similar to Mesopotamia in that both had an agriculture based on irrigation and fertility by silt bearing floods. Cereal crops were also similar, the two main ones being wheat and barley. Trade was a large part of this civilization, but they were not as reliant on trade as Mesopotamia was. They traded with their neighbors to the West items such as metal ores for crafts. Trade may have been conducted by private merchants as there is substantiation of caravan routes. Some routes linked Northwest India with Mesopotamia, while others lined the sea route along the Persian Gulf. Part of every farmer’s crop was paid into the granary. These granaries were massive for the time, and are supposedly the equivalent of a state bank or treasury. The level of grain present would have represented the level of public credit. In Mesopotamia there were state and temple grain stores, but because of the size and architectural importance of those at the Indus sights, they are believed to have a greater value.

A centralized government ruled the state in Indus civilization. The regular planning of Indus towns and cities was made such that each was built as a whole by an authority with total control. As a result of the consistency over such a large area, the entire Indus area was a unified state. The two main sights were Harrapa and Mohenjo-Daro, and they were the commercial and administrative centers. It is unlikely that there were two equal rulers, more likely a combined military and religious power. There weren’t temples that dominated the area like at Mesopotamia, only a few shrines have been found in the Indus territory. The nature of the authority there isn’t known, whether it was ruling priests or kings but it is known that the ruling privileged had religious practices of ritual cleaning through bathing.

The government and rule of the Harappan civilization tied in with their social structure. In this hierarchy system, the Brahmans (priests) were at the top, followed by the Kshatriyas (warriors), the Vaisyes (commoners/merchants), the Sudras (artisans and laborers) and finally a sort of sub-class, the Untouchables. The only difference between this system and other ancient systems is that as per Hinduism, you cannot change class. You stay into the class you were born into. This ties in with the religious belief of reincarnation and that you must lead a good life in order to have good Karma and be born into a better caste. Each class lived a different lifestyle. They had certain occupations that other classes don’t follow, they ate different types of food, they had different family customs, and so forth. The Brahmin were the judges and priests who held important positions in government and had the most wealth and power.

In Mesopotamia the ruling powers were both divine and royal. The Sumerians had a belief that people were created by gods to labor for them. The temple and its land belonged to the god Ningirsu and his wife Baba, and their family. The land owning upper classes included ruling princes and their families, leading priests, and palace officials. The political function was not separated from the religious function for much of Mesopotamia’s history. In old Babylonian times a town or a precinct mayor led a group or council of elders. Nobility formed the upper house of elders, and also land-owning commoners met in a popular assembly to make important decisions.

Together they managed dealings such as appointing governors, and choosing kings to be temporary military commanders in times of crisis. Eventually there was a separation of the kings from the temple, and the soldiers were kept in the king’s palace. The king with his increasing power, acted not only in the name of his city god, but also in that of justice, the sun god Utu. Because of the divine and the royal interest in justice, the people felt safe and secure that injustices would be punished.

In the social structure of Mesopotamia they had skilled people that knew about medicines and they also had physicians. Documents from old Babylonian periods state that they used herbs and animal parts. Mesopotamia had a great slave population, including different kinds of slaves. There were slaves which private persons kept, and those belonging to the palace and the temple, called serfs. City people did not usually own slaves though. The family units here were small, with one wife, except in old Babylonia sometimes a man could take a second wife. There were other associations shown in society such as religious care for the souls of the dead, and professional groups of highly trained people in exorcism and divination techniques.

There were brewers and craftsmen whose success depended on the relationship of the palace and the temple. Often in Mesopotamia there existed a tension between it and surrounding country, which caused a lack of political stability. The temple and palace made income from taxes or rent or income from agricultural holdings. They also collected the offerings from worshipers of god. The relationship between the king and his subjects was complete obedience on the same level as worshipping gods. The upkeep of roads was the royal responsibility, and certain privileges were also ensured by the city, which all took place inside the city walls, much like the city walls of Indus areas.

Mesopotamia had its Golden Age during 2900-2700 BC. Kish, a city in the north of Babylonia, is the first postdiluvial (post-flood) city mentioned in the Sumerian King Lists. After the great Flood, the `kingdom lowered again from heaven’. It was the age when `the four quarters of the world’ lived in harmony. According to excavations, Kish was an important city in Mesopotamia. It was the center of the of the first Sumerian dynasty and discoveries point to a specialization in labor and craftsmanship. Golden daggers and other artifacts were found in tombs and in Kish, archeologists found the first monumental building that was a palace, rather than a temple. This signifies that the King was in power and not the high priests.

The ‘King of Kish’ title was an important title and prestige went along with it but its importance was not merely superficial. Kish was situated in the north of the plains of southern Mesopotamia on a critical spot at the Euphrates River. A breakthrough of the river to the lowlands in the direction southwest would have meant that a whole system of irrigation channels would be without water supply. The control of the Euphrates in the neighborhood of Kish thus was of vital importance to the rulers in the south of Mesopotamia. The title `king of Kish’ could have indicated the ruler that exercised this control.

The Indus Valley and Mesopotamian civilizations were similar in some aspects due to their state as river valley civilizations; they did differ in some essential ways. While these two civilizations have long since gone, they still influence modern culture. The 60-minute hour, 60-second minute, and 360 degrees in a circle are results of Mesopotamia while the chariot peoples probably had their most lasting effect in India, where they set many of the basic patterns of Indian life and belief, patterns that remain firm and powerful even to the present day.

Comparison and contrast of Mesopotamia and the Indus Valley. (2016, Jul 15). Retrieved from https://studymoose.com/comparison-and-contrast-of-mesopotamia-and-the-indus-valley-essay 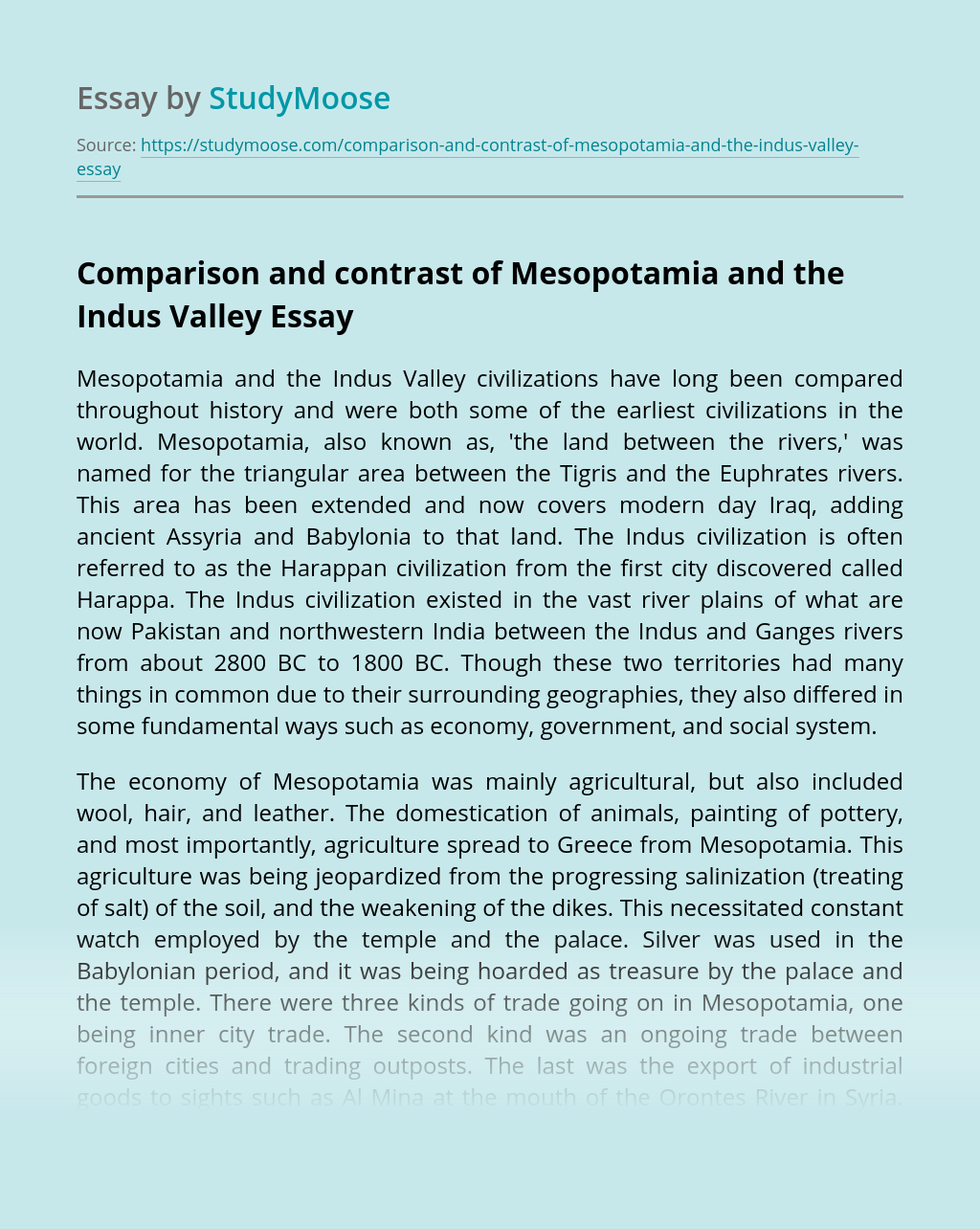 Seven Ancient Wonders Of The World

The ancient civilizations of the Nile Valley and Sumer are considered to be the beginning of life in their respected regions. The following essay will provide a look into the similarities between these two great societies. The Nile Valley civilization began as early as early as the Paleolithic Age, and a Neolithic culture was formed...

Get Essay
The Contrast of French and Spanish Missionaries

“Ethical religion can be real only to those who are engaged in ceaseless efforts at moral improvement. By moving upward we acquire faith in an upward movement, without limit.” (Felix Adler (1851-1933), American educator) Since the beginning of colonial expansion, the missionaries believed in the divine right to evangelize the natives in the new world....

1. Write an essay comparing and contrasting two civilizations in one category from the River Valley Civilizations sheet. For example, you could choose Egypt and China and compare and contrast the governments. Your essay should have specific information. Be sure to explain both how they were alike and how they were different in that category....