Compare and contrast the Inca and Aztec civilization in terms of religion, politics, social structure, etc

Question: Compare and contrast the Inca and Aztec civilization in terms of religion, politics, social structure, etc. Which of the two do you think was the more powerful empire? Explain your answer.

The Aztec and Inca Empires

Both the Inca and Aztec civilizations have similarities in religion, politics and social structure. The Aztecs were nomads that were instructed by Huitzilopochtli, the Aztec sun and war god, to head south in search of an eagle on a cactus with a snake in its mouth.

Don't use plagiarized sources. Get your custom essay on
“ Compare and contrast the Inca and Aztec civilization in terms of religion, politics, social structure, etc ”
Get custom paper
NEW! smart matching with writer

Despite these two empires similarities the Inca had the more powerful empire. This is because the Incas had a much larger empire at it height and a better sense of government while the Aztecs had a better social structure and were more devout to their religion.

To these two comparable empires religion was of great importance. So important that the taking ones life in the sake of religion was accepted. Although this was more prevalent through the Aztecs, it was still practiced with the Inca.

Human sacrifice was performed to please the gods and promise for a lavish crop in the year to come. Prisoners of war, volunteers and the youth would be sacrificed in mass. Volunteers who chose to die for their religion were set to one year of anticipation but you would live a very lavish life up to their sacrificial murder. This idea of sacrifice was inherited from the Maya and the Toltec empires. The sacrifice on the Inca side was a step down from the Aztecs. It was rare that they would sacrifice a human; it would be more common to see a goat or other animals be sacrificed. They would only sacrifice a human during a famine, war, etc. Though both empires were very stanch and devout to their religion, the Aztec had the more powerful religion

Although the religion was somewhat the same, between the Inca and the Aztec the social structure was much different. The Aztecs based their social structure on a ladder of four classes: nobility, commoners, serf and slaves. The nobility and the commoners could own Land. Serfs were members of the lowest social class. They were assigned and attached to the land owned by the nobles and required to perform labor with a certain amount of work for an amount of free time. A serf was very similar to the indentured slave, in the seventeenth to eighteenth centuries. Then there was the slave who worked on the noble’s properties with no release. In contrast, the Inca social structure was based on equality.

Everyone was equal and there was no upper or lower class – a stateless society. Everyone would have the same stipend or salary. In this social structure no one owned private property but everyone had the same amount of land to live on. Anything that you grew or harvested belonged to the government. Also if you had more of something than someone else, for example sheep, you would be required to give it away to people who had less sheep than you. This was a good structure for if you were poor and just moving in, but not so good if you were wealthy and prosperous because you would lose all of you possessions to enforce equality.

Government and politics were both prevalent in both empires. A hierarchy controlled the Aztec empire. Steps separated it; each step had more command and power than the one lower. The emperor was atop this step latter. He controlled the army and was backed by various religious viewpoints, such as the emperor was a god. The emperor and his subjects also had the job of also controlling the life of the commoners. As a deity or god, the emperor owned all the land and regulated the amount of food rations each person got. This is similar to our present day socialism and communism. This government was not as centralized as the Inca. Pachacuti, the 9th Incan ruler, created an authoritative central rule to calm the large empire. He shaped a very detailed and intricate structure consisting of tax collection, courts, military, and trade security. Also a common language – Quechua – was developed to enforce a less diverse society.

There is no doubt that these two empires were very powerful for their time period. But they couldn’t have been that powerful. Towards the ends of both of these empires they were attacked and conquered by the Spanish conquers. This shows that these empires led to bigger, better and new empires such as the Americas and the Europeans. These empires taught us to farm on a rocky plain by using steps and various other great tools. They also help us with the understanding and importance of human sacrifice. As you can see these were both two great empires.

Compare and contrast the Inca and Aztec civilization in terms of religion, politics, social structure, etc. (2020, Jun 01). Retrieved from http://studymoose.com/compare-contrast-inca-aztec-civilization-terms-religion-politics-social-structure-etc-new-essay 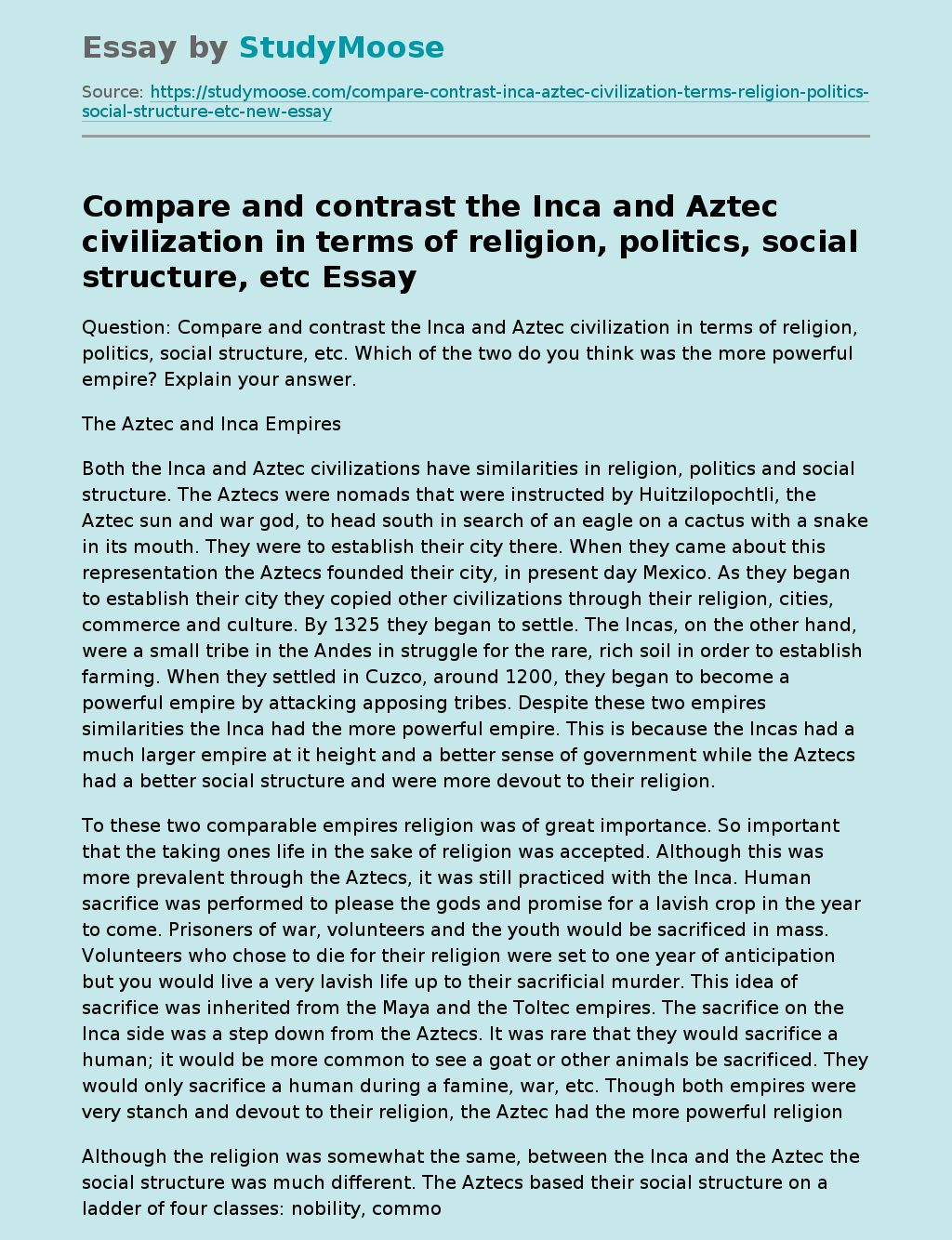