Individuality refers tothe existential philosophy and ideology that views and emphasizes the moral worth of the individual by promoting the importance of an individual’s goals and desires. Individuality (also sometimes called ‘Individualism’) valuesone’s independence and self-reliance. It advocates that the interests of an individual should come before those of the state or one’s social group. It strongly opposesthe external interference upon an individual’s interests from the general society or even established institutions like the government.On the other hand, authenticity refers to the extent to which a person is true to their own personality, spirit and character, in spite of the external pressures that they encounter.

In existentialism, a person’s conscious self is said to be ‘authentic’ if it is able to come to terms with existing in a material world and encountering forces from other factors in that world. These external pressures and influences are often viewed as very different from — or in conflict with — one’s inner consciousness.

In the field of existentialism, there are two renowned philosophers and scholars whose ideas and postulations we are goingto compare and contrast in this paper: the German philosopher Martin Heidegger and the Danish theologian and philosopher SørenAabye Kierkegaard.

While Kierkegaard puts a lot of emphasis on one’s individuality and having an inner self that drives a person’s consciousness (Kierkegaard, 31), Heidegger places great value on authenticity (although also avoiding inauthenticity). These are the two positions by the two philosophers that this paper is going to dwell on, comparing their similarities and contrasting their differences to explain their ideas on existentialism.

Both Heidegger and Kierkegaarddeal almost exhaustively with the concept of individuality and authenticity. They differ in so much but also have similar arguments in so much. According to Kierkegaard, authenticityis heavily reliant on one’s finding of authentic faith and becoming true to themselves. He develops the idea that the news media — aswell as the bourgeois church and Christianity — arehuman factors that present major challenges for a person trying to live their life authentically (Kierkegaard, 33). In this regard, Kierkegaard sees both the news media and the Christian church as agencies intervening in a person’s life and blocking them fromtheir true life experiences, authenticity and even oneness with God.To solve this conflict, Kierkegaard thus suggests that a personshould take steps to choose to surrender to something whose scope goes beyond comprehension. He calls it a leap of faith into the religious. However much an individualis reluctant to expend their effort in developing their own views, theyhave a duty to do so if they have to discover authentic faith that is being driven by desire from their inner selves.

In his Being and Time, Martin Heideggermostly concerns himself with the understanding of the particular brand of existence and consciousness that is unique to each person. Heidegger’s philosophy therefore concerns itself with what it means to be human. It is a unique human existence that he calls Dasein– a German word that is often translated into English as “being there”.As a term, Dasein has also been used similarly but not precisely the same way by German philosophers who came before Heidegger. Instead of considering simply the existence of consciousness as the main distinctive feature of the human conditionlike many philosophers before Heideggerdid, he offers our time-governed existence as human beings as the defining characteristic. By this,Heidegger wants us to understand that human consciousness is always constitutedof the past, the present and the future. Human beings are consciously aware of their mortality at the end of this life, and are always looking forward to the next step in their lives.

While Heidegger considers inter-human relations to be a very important feature of the authenticity of human existence, Kierkegaard seems to place a lot of emphasis on the importance of the inner self in the consciousness of being human. For Kierkegaard, largescale politics and the pressures from thelarger society are ascribed a strikingly imposing character. Such a threat is directed to the most fundamental possessions of human existence — one’s authenticity and individuality. On the other hand, Heidegger presents such threats in terms of four key interconnected concepts: authenticity, ‘falling,’ anxiety or angst, and the “they”.Heidegger speaks of the importance of ‘publicness’ and the mass society, hinting at an ideal balance of political affairs toward which all human beings should strive (Heidegger, 135).

Despite the fact that Heidegger investigates the nature of his Daseinphilosophy without offering an ethical or normative judgment, he seems to agree with Kierkegaard on the importance of holding individuality (as authenticity of the human being) in very high esteem. In this regard, however, Heidegger’s casting of ‘publicness’as mass society seems to destroy Dasein’s authenticity and is therefore an evil. Heidegger therefore sees the ‘authentic’ as being more virtuous and ultimately desirable in the human existential sphere than the ‘inauthentic’. According to Heidegger, the “they” and the “others” are at the very minimum vaguely pejorative labels of the ‘inauthentic’ that Heidegger uses to denote the importance of societal pressures on an individual (Heidegger, 118).

Heidegger also introduces the concept of ‘distantiality,’ which is Dasein’s impression of its distance in relation to other people in the existential world (Heidegger, 125). ‘Distantiality,’ together with averageness and ‘levelling down,’ are the existential qualities (or “ways of Being”) of the “they” and, additionally, constitute the content of ‘publicness.’ ‘Levelling down’ seems to be the phenomenon of the reduction of all things to averageness or the status quo. A way to think about this last term which I believe captures its essence in a way easily relatable to contemporary readers is the oft-lamented “lowest common denominator” appeal of most mainstream movies and television. “Publicness proximally controls every way in which the world and Dasein get interpreted,” says Heidegger, and this ‘way’ seems to involve a mass dumbing down of everything. In a striking pronouncement, hammering home the magnitude of mass society’s threat to Dasein, Heidegger states that “everyone is the other, and no one is himself”.

Kierkegaard makes note of a crucial point on Heidegger’s concept of the “they” which gets lost in translation: Both Kierkegaard and Heidegger translate ‘das Man’ as “the they”, by analogy with such usages as ‘They always say that…’; but this carries much more implication of ‘otherness’ than does ‘das Man’ (Kierkegaard, 1844).

The point here is that Heidegger’s idea of ‘das Man’ implies an identification of oneself with the “others”; “‘One always says…’ makes it clear that I include myself in this way of talking,” It is very important to Heidegger’s argument that an individual thinks of themselves in terms of this anonymous “one”. The importance of thisequarion of the self with the “others” lies in explaining the phenomenon of the “others” taking over for Dasein(///).

But this distantiality which belongs to Being-with, is such that Dasein as everyday “Being-with-one-another”, stands in subjection to the “others”. It itself is not; its Being has been taken away by the “others”. Dasein’s everyday possibilities of Being are for the “Others” to dispose of as they please.

The condemnation of public life in this passage should not be understated. Absorption with the concerns of the everyday work-world in effect prevents Dasein from existing at all. If the presence of Dasein is the defining characteristic of human existence, Heidegger seems to argue here that we are not really human when we are engaged with the concerns of the everyday work-world. We are, at least, not authentically Being-in-the-world in this state. This is because, as just said above, we are conceiving of our ‘selves’ through the lens of the Others; both by interpreting our ‘selves’ in the way that we imagine that “they” do, and by thinking of ourselves as like Them, or as a member of their ranks(Crosswhite, 1992). What makes this even more troubling is that, due presumably to our inability to engage with the “others authentically, “they” take on the character of a faceless mass; an ambiguous and mysterious collection of impressions we have about what everyone else is like. By extension, our conception of our selves is, in turn, also no more than a vague, “indefinite” impression.

In this inconspicuousness, the real dictatorship of the “they” unfolds itself. We take pleasure and enjoy ourselves as they also take pleasure. Similarly, according to Heidegger, we shrink back from the ‘great mass’ as they also shrink back. We find ‘shocking’ what they find shocking. The “they”, which is not anything definite, prescribe for us the kind of our being of everydayness (Crosswhite, 1992).

In conclusion, I would like to state that I agree more with Heidegger’s ideas on individuality and authenticity because they put more emphasis on the importance of the external influences and pressures that impact on one’s existentialism and inner consciousness. Truth be told, the existence of an individual in the sphere of life in the context of other humans is very important to one’s life. 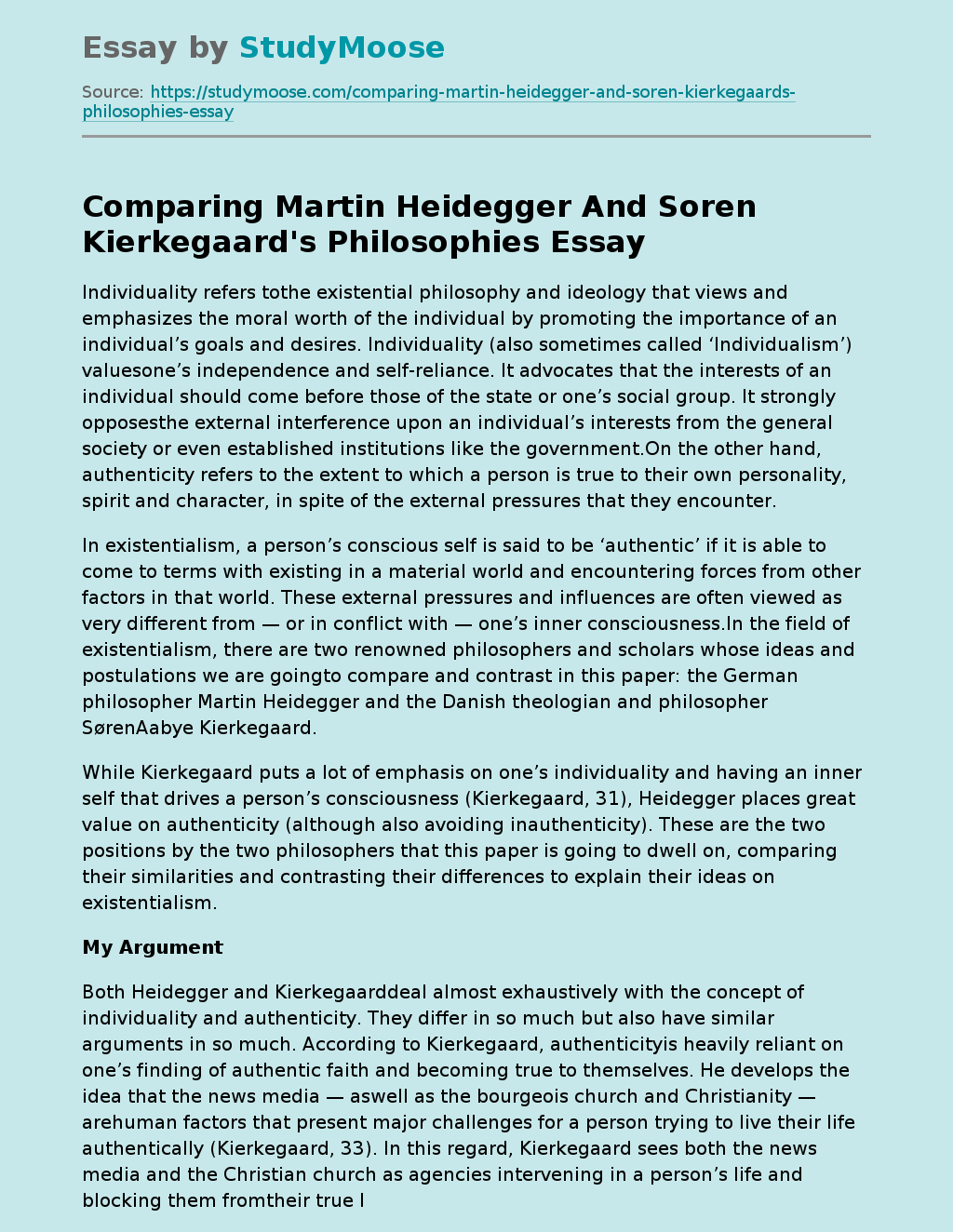