Nonconformity is a force from one’s personal self to step outside of the norm and bring a sense of individuality to a world in which there is very little originality anymore. As a society, we are ruled by the media. They force their points of views down everyones throats without one’s consciousness even acknowledging so. We walk past billboards, view commercials, peek around all of our social media websites, and all the while our minds are being bred to be biased towards a certain fashion, a certain point of view, as far as even a music choice which is most preferable.

Turn in your highest-quality paper
Get a qualified writer to help you with
“ Conformity Vs. Nonconformity ”
Get high-quality paper
NEW! AI matching with writer

To step outside of this commonality in today’s society to the eye doesn’t seem too difficult. In everyone’s minds they are “unique”, “original”, and “creative”. What we don’t notice is how this seems to be what everybody believes, yet the fashion, attitude, whatever is as a phase and a trend. To truly step outside is a great leap and it’s not simply acknowledging just how original you are, it’s to live your life everyday in not simply the same consistency but in such a way that you aren’t driven to stand out or fit in.

It’s a numbness to either side of the spectrum. Being able to cope and not be judged based upon an individual’s nonconformity today is not as hard as it was in the past, however it is still picked upon.

It’s only natural to separate the one that does not belong, as seen in many animal species when an animal is bred with a genetic deformity causing it to not belong, thus being shunned by the rest of the basic of the species.

Today, even, one of the main controversies is homosexuality. Despite all the recent movements and reformities of the law, gay male and females are still ridiculed. Sometimes to the point of suicide or even such bizarre, violent bullying leading to near fatal wounds and mental scars. So in a sense, Ralph Waldo Emerson’s famous aphorism is correct. “For non-conformity the world whips you with displeasure.” From personal experience, I cannot recall a certain point in time when my nonconformity has been looked down upon, however I do believe that I fit in such a space between conformity and nonconformity. If you were to judge based upon pure physical factors, I would say that I do not choose to dress myself in a way to stand out, simply on personal taste with a hint of outside influence. Mentally, I believe I do have an abstract method of thinking. I enjoy questioning things and learning, which is growing more uncommon in today’s generation.

Colleges tend to lean towards the unconventional way of thinking. After a professor has read so and so many papers from his hundreds to thousands of students, things can get a bit repetitive and uninteresting. A writing that stands out tends to create excitement with extra attention. This is how you show yourself, as a student, just the potential that you do harness. The ability to think outside of the box and express your thoughts and perspective in a way that invokes thought is a way to prove not only that you understand yourself, but it also is a way to even provoke questions that would allow somebody to learn something new. However abundant and appreciated nonconformity may be in today’s society in the novel “Brave New World” by Aldous Huxley, this approach to life is completely opposite. Within the “Brave New World” conformity is a method in which this society prospers and maintains control. From the time people are born in this society they are taught how to think, what to believe, and where they belong. This method forces people to grow just exactly how the government wants them to grow. This society is controlled using various methods. If you feel any sort of emotion, which would then create individuality, you just take a “Soma”.

This drug eliminates every feeling. If you feel sad, take a Soma. If you are overly excited or ambitious, take a Soma. Another method is how it is a norm to sleep around with other people frequently. In today’s society if you practice “free love” or do not have emotionally attached sex then you are awfully judged and are pegged names that deem you somebody not to get close to. In “Brave New World” the opposite is so, and if you have sex with a person regularly you are then criticized. This operates control in order to detach love from sex, for love is a feeling which would separate you in this world. John the Savage is an excellent example for what happens when a nonconformist steps foot into this society. After his displeasing trip, he tries to change the way things are run. He spreads word of how he was raised. Even hearing the word “mother” gives people there an uncomfortable feeling because they were not raised, they were not nurtured, they were engineered. After all is said and done John is banished, but before he can reach that point he simply falls to depression causing his most unfortunate suicide at the end of the book. To conform is an easy task for the simple minded. It is a meager achievement to breeze through life without questioning outside of what you are taught to accept. To go above and beyond displays a true thinker, someone worth remembering for what they believed- a nonconformist.

Conformity Vs. Nonconformity. (2016, May 12). Retrieved from https://studymoose.com/conformity-vs-nonconformity-essay 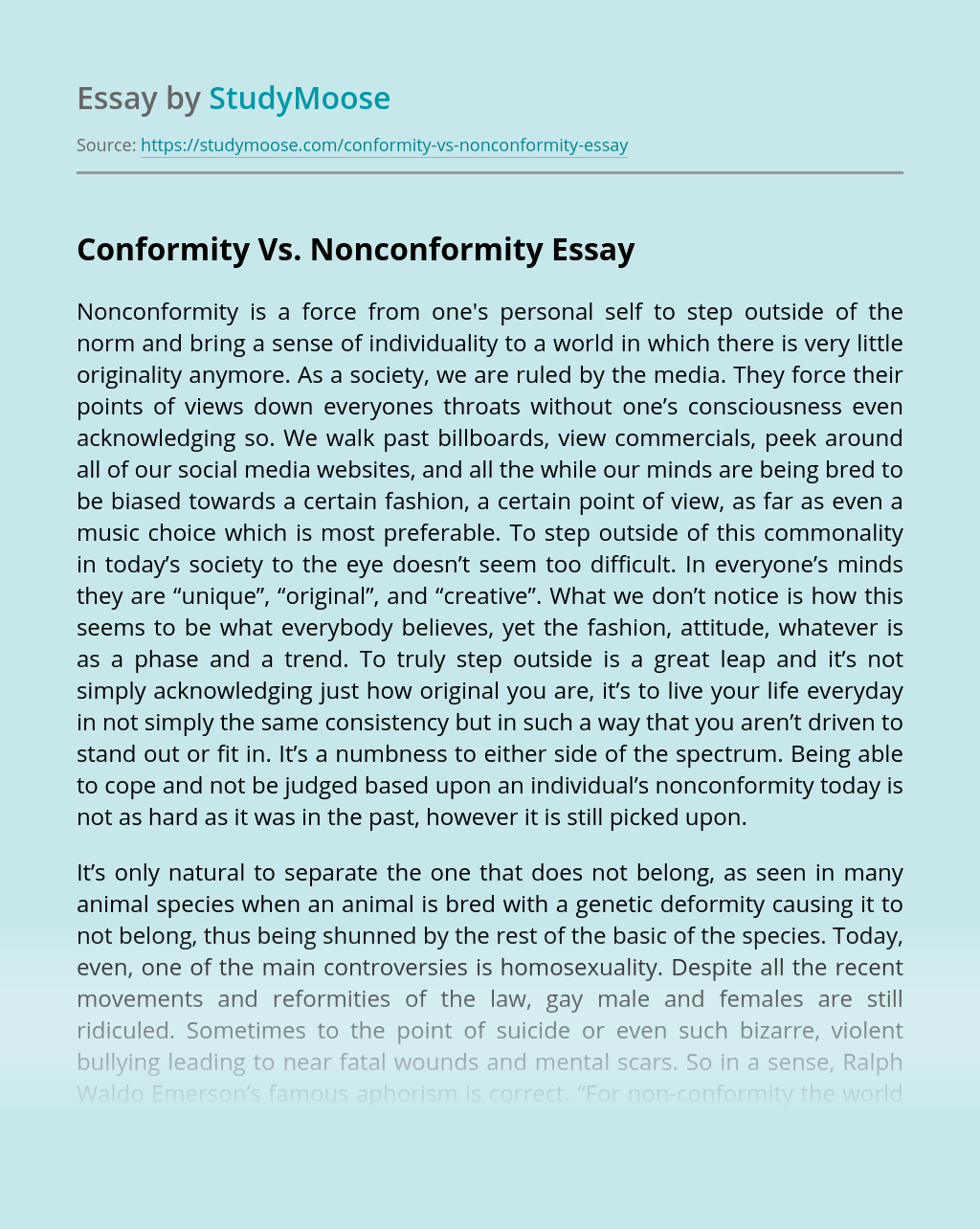 Turn in your highest-quality paper
Get a qualified writer to help you with
“ Conformity Vs. Nonconformity ”
Get high-quality paper
Helping students since 2015
Stay Safe, Stay Original