Compare and contrast two poems, one by Liz Lochhead and one by Carol Ann Duffy

Two poems in which the poets focus on the theme of journeys are Originally by Duffy and Lanarkshire Girls by Lochhead. In Originally Duffy presents a situation where the speaker is a child moving from Scotland to England, whereas in Lanarkshire Girls Lochhead writes about fourteen year olds travelling to Glasgow. In examining how both these poems convey journeys, a good place to start would be their titles.

Through the title Originally Duffy conveys that this is a poem about our origins and how even though we may take many journeys throughout our lives, we will always be irreversibly tied to our place of origin.

Don't use plagiarized sources. Get your custom essay on
“ Compare and contrast two poems, one by Liz Lochhead and one by Carol Ann Duffy ”
Get custom paper
NEW! smart matching with writer

Lanarkshire Girls, on the other hand, locates the poem in the Scottish area of Lanarkshire and the word, “girls,” suggests and excitement and immaturity, on the cusp of their life-long journeys.

The most effective way that each poet writes about journeys is their use if a wide range of methods and imagery. Beginning with the first stanzas of each poem, in Originally Duffy immediately gives the reader a sense that this is a journey of unknowns: “We came from our own country in a red room.

” The use of the possessive pronoun, “our own country,” when referring to Scotland captures how strongly the speaker feels towards their origin, and, “red room,” conveys that they are apprehensive about this journey into the unknown. This could be a reference to HG Wells’ The Red Room, in which red is associated with acute anxiety and suffering. Similarly, Lochhead also uses colour imagery in Lanarkshire Girls, but it is not so negative in connotation.

She writes, “Coming into Glasgow / in our red bus through those green fields.” Here red represents a sense of glamour and sophistication about this journey, contrasted with the green which symbolises how the girls are only on the cusp of puberty and are not quite ripe. In both poems, the journeys are used as extended metaphors for growing up and becoming more mature.

In the second stanza both speakers are introduced to the destination of their journeys for the first time. Duffy makes profound observations about journeys: “all childhood is an emigration.” This is the overriding theme of her poem; the uphevel that is brought when a child journeys from one country to another. She juxtaposes the words, “familiar,” and, “unimagined,” emphasising that this is truly a journey into unknown territory. She uses deliberately childish language when she refers to, “big boys,” which conveys the speaker is still uncomfortable in her new surroundings. Duffy takes literal aspects of childhood and makes them metaphorical, such as the simile: “anxiety stirred like a loose tooth.” Likewise, the entire poem is taking the literal journey and transforming it into an extended metaphor for childhood itself.

On the other hand, Lochhead builds up a sense of excitement rather than dread in the second stanza of Lanarkshire Girls. She uses urban imagery and lists the buildings that the speaker passes on the bus, such as, “shabby scheme, gospel halls, chapels, Orange halls.” The use of sibilance further conveys the novelty of the new environment that the journey is bringing. Just like in Originally, there is an element of dread introduced: “doctors’ surgeries, crematoriums.” Even if the girls are currently only starting out on the journey that is life, here Lochhead reminds us that even these girls will one day get sick and die, and that all journeys must come to an end. There is a subtle undercurrent of fatalism underneath the outward exuberance of the journey.

In the third stanza of Originally a certain amount of time has passed since the original journey and the speaker is gradually assuming a new identy for herself. She notes that when her brother assimilated to his new environment she felt, “only a skelf of shame.” The use of a Scottish colloquialism represents that no matter how hard she tries to distance herself from her origins, it will always be part of her language. She has reached the final destination of her journey. On the other hand, in Lanarkshire Girls the girls wholeheartedly and unreservedly engage with their new environment. Lochhead quickens the pace of the journey: “our bus sped / past the city stops.” Unlike the speaker in Originally, these girls can’t wait to reach their final destination. The hard, plosive use of alliterative phrases such as, “glamorous Gallowgate,” and, “Terry Tattoo Artist,” emphasises the foreignness of their destination, which is also captured by the name of the street: “Jamaica Street.” Both speakers have embarked on a journey into the unknown and both Duffy and Lochhead use clever methods to capture how they relate to their new environments.

Furthermore, the tone of each poem reflects the journeys that are written about. In Originally Duffy uses a tonal shift. In the first stanza the tone is one of anxiety and fear, revealed through sentences such as, “my brothers cried.” By the final stanza the tone is now one of perplexment, as captured by the final line: “and then I hesitate.” This shift in tone accurately captures how the journeys we take in our childhood can change our attitudes and feelings towards our identities and life itself. On the other hand, the tone in Lanarkshire Girls is fairly constant. Lochhead builds up a feeling of excitement and naivity using phrases such as, “drumming us out of the country,” which gives the auditory impression of a drumroll, and, “dreaming ourselves up.” Her presentation of hope and exhilaration reflects the excitement that the extended journey of puberty can bring.

Moving on, a vital part of how the poets write about journeys is their use of form and structuring. Both Originally and Lanarkshire Girls are dramatic monologues that give a deeply personal, and at times colloquial and conversational, insight into the journeys in the poems. Many readers will be able to relate to the scenarios presented on a personal level.

In terms of stanzas, Originally is divided into three fairly even stanzas that each deal with a different aspect of the speaker’s journey. The first depicts the initial anxiety of leaving home, in the second she has just arrived at her destination and by the final stanza she has assimilated into her new environment. This controlled and considered stanza structure emphasises how childhood journeys follow a cycle of uphevel and eventual integration. Likewise, Lanarkshire Girls is also divided into three stanzas, although they are not as even in length as Originally. Again, the three stanzas track the stages of the speaker’s journey from home to a new environment. The fact that the structure is not as rigid as Originally suggests that the journeys we take in our adolescent years are more free and less restricted by adults.

In terms of rhythm and rhyme, Originally is written in a loose iambic pentameter but has no rhyme scheme, which conveys the disjointedness that the speaker feels on her journey. On the other hand, Lanarkshire Girls is written in free verse meaning that it has no rhythm nor rhyme scheme. Again, this conveys that the journey presented by Lochhead is much more spontaneous and exciting than the predetermined and anxious journey that Duffy presents.

In terms of the poets’ diction, in Originally Duffy uses punctuation and varied sentence structure to full effect when depicting journeys. For example, in the second stanza she writes, “some are slow, / leaving you standing, resigned.” This long sentence is broken up by several commas which emphasises the unhurried pace of the journey. This is immediately juxtaposed by a caesura followed by a short, staccato sentence, “others are sudden.” Duffy cleverly captures the unpredictable fluxuation in pace that childhood journeys can bring. On the other hand, Lochhead uses long and detailed sentences in Lanarkshire Girls. For example, the entire second stanza is one sentence. This suggests that the journey of puberty is more full-on and unrelenting than the slower journeys of childhood. Moreover, another similarity between the two poems and how they depict journeys is that both use frequent enjambment between lines to replicate the fluid motions of a car or bus journey.

To conclude, both Duffy and Lochhead skilfully use many poetic methods to capture the turmoil and excitement of journeys taken during childhood and adolescence. At the conclusions of both poems, even though the particular journeys being written about have ended, the reader gets the sense that their true journey throughout life is only beginning.

Compare and contrast two poems, one by Liz Lochhead and one by Carol Ann Duffy. (2020, Jun 01). Retrieved from https://studymoose.com/compare-contrast-two-poems-one-liz-lochhead-one-carol-ann-duffy-new-essay 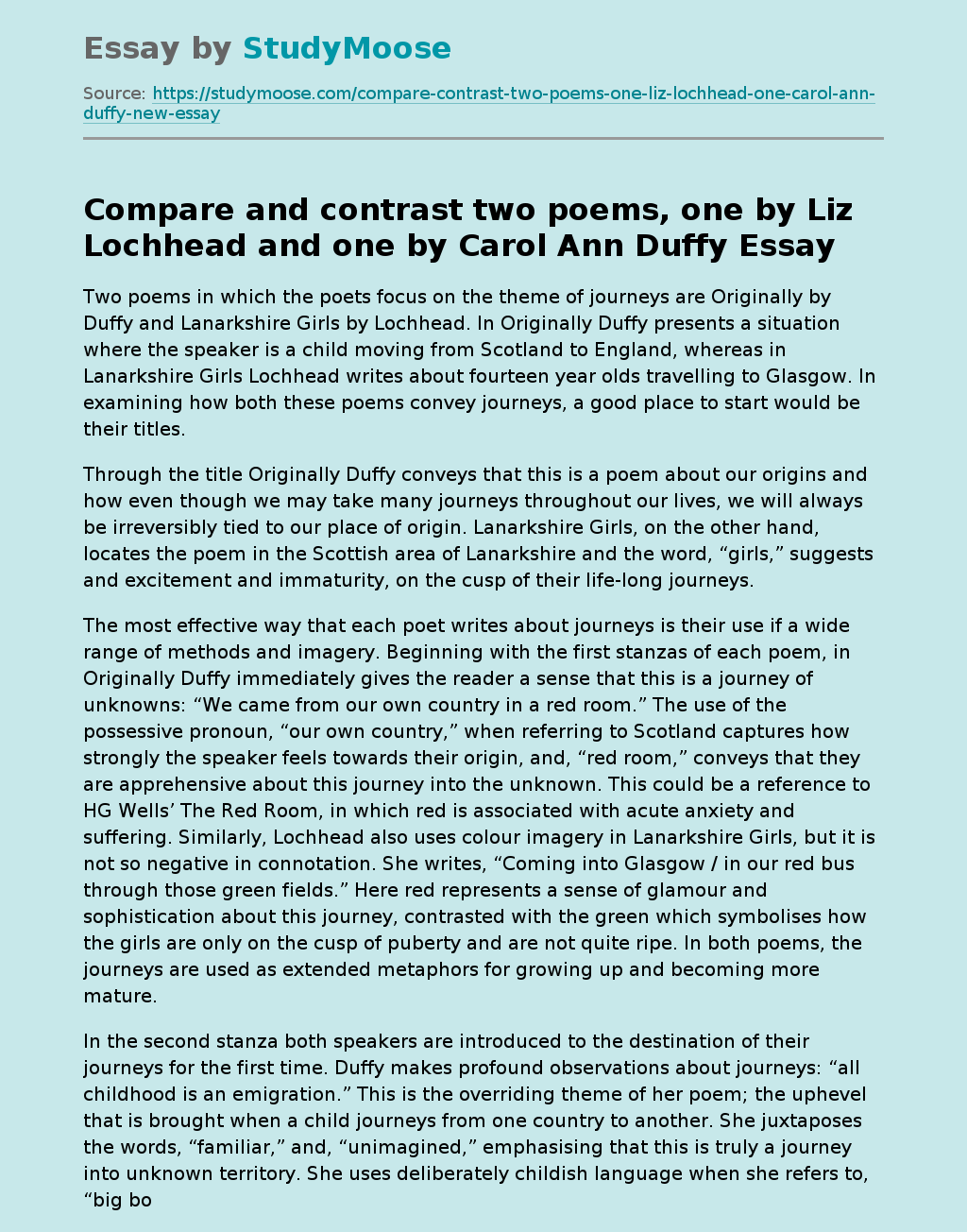