Franco Zeffirelli’s version of Romeo and Juliet aims to echo Shakespeare’s original format, while Baz Luhrman seeks to reintroduce the tragic tale of star-crossed lovers to a modern audience through the use of fast paced action and violence. In my assignment I will compare and contrast theses film versions with Shakespeare original text.

A striking contrast between these two productions is the choice of location where the actual story unfolds. Both Shakespeare and Zeffirelli set their play in Verona, Italy.

Don't use plagiarized sources. Get your custom essay on
“ Compare and Contrast Shakespeare’s original text of “Romeo and Juliet” with two film productions, focusing on Act 1 scene 5 ”
Get custom paper
NEW! smart matching with writer

I t provides a sunny and tranquil setting unlike Baz Luhrman’s adaptation, which takes place in Verona Beach, California. Lurhman creates a suburban setting where sky scrapers take the place of sand stone buildings. Luhrman, however fails to truly represent our lifestyle and society, as too much of the film’s emphasis is placed upon the expensive way of life enjoyed by the rival families. This is revealed by the lavish party held by the Capulets.

The costumes worn by the actors to the ball are very important.

In Luhrman’s production, Romeo is dressed as a knight in shinning armor, representing nobility, chivalry and courage. Juliet wears an angel costume. She is a perfect vision of beauty, unwise to the ways of the world. Her purity, innocence and gentleness are exhibited. Tybalt is attired in a devil’s costume. It is representative of his malevolent nature. His costume like him is a force to be feared. Lady Capulet is dressed as Cleopatra, a famous seductress; she clearly plays up to this reputation by flirting with Tybalt and Paris.

Cleopatra is reported to have been a renowned beauty; I believe Lady Capulet strives to be one. Lord Capulet is dressed a Caesar, demonstrating his vast wealth and power. It is evident that Luhrman uses costumes to embody the innermost nature of the major players. Zeffirelli applies traditional garments to reiterate the traditional format of his play. His characters are masked, concealing their true identity. This gives them a certain freedom from the constraint of society’s rigid rules concerning behavior and decorum. Zeffirelli expects the audience to see Juliet’s purity, Romeo’s courage and Tybalt’s wickedness through the words they speak.

Music is used to great effect in this scene by both Luhrman and Zeffirelli; it serves to heighten the emotion of the lovers’ first meeting. The genre of music utilized varies enormously. Luhrman infuses a contempory love ballad into the. Zeffirelli employs music to convey a central theme. The song is entitled: “What is a Youth?” it compares Romeo and Juliet’s love and lives to a rose, beautiful but brief:

“A rose will bloom, it then will fade

So does a youth, and the fairest maid.”

All background noise is erased as Romeo sees Juliet through the fish tank in Baz Luhrman’s version. The young lovers are so consumed with one another that they are oblivious to anything else around them.

From the moment Romeo meets Juliet at the Capulet’s ball his affected love for Rosaline vanishes:

“Did my heart love till now? Forswear it, sight!

For I ne’er saw true beauty till this night.”

He puts aside his sentiment and artificiality. True love takes complete possession of his mind and soul and becomes the driving force in his life. After meeting Juliet, even Romeo’s language undergoes a great change. It becomes more simple, pure and eloquent. It is truly the language of the heart. Luhrman and Zeffirelli chose to utilize Shakespeare’s original dialogue. This adds to the feeling that love, such as Romeo and Juliet experience, is extremely rare and beyond the reach and comprehension of most.

The attention of the audience is divided during the party between the bitter, anger fuelled threats of Tybalt and the heartfelt, carefree exchange shared by the two doomed youths. This scene expertly contrasts extreme hatred with passionate love. :

“I will withdraw: but this intrusion shall,

Both directors masterfully shift between these two scenes to portray that Romeo and Juliet’s love is threatened from the very beginning, and as a result doomed.

The name Romeo is Italian for “pilgrim”. It is thus fitting that, in both film versions, he should approach Juliet as a pilgrim would a holy shrine. The religious imagery used by the pair upon meeting signifies the piousness of this occasion:

“If I profane with my unworthiest hand

it urges the reader to believe that a solemn exchange has taken place, not a mere flirtation. Both Zeffirelli and Luhrman conceal Romeo behind an obstacle, be it a curtain or pillar. This serves as a symbolic representation of Romeo’s desire to mask his deep feelings for Juliet until he can discover hers. This re-emphasizes to the audience that Romeo has been thwarted in love before and possibly fears rejection. Juliet in contrast is an amateur in this field and so has no doubts.

Within Act 1 scene 5, prominent status is given to the workings of ‘Fate’ and its manifestations in visions, omens and forebodings. The foreshadowing, so common in all of Shakespeare’s plays is uttered form Juliet’s mouth near the close of the scene. Upon identification of her lover, Juliet, like Romeo, finds it cruelly ironic that “my only love sprung from my only hate.” She laments that this news is an ominous indication of what lies directly before her. Both youths realize all too late the seriousness of their love and the problems it can cause.

Although both versions achieve the same end through different means, my favorite interpretation of “Romeo and Juliet” was that of Franco Zeffirelli. I found it consistent and easy to follow. It enabled me to fully grasp the Shakespearean language used as it was spoken more slowly and without American accents. I also enjoyed Luhrman’s modern adaptation but I thought it was a little over the top and the violence detracted from the central love story. 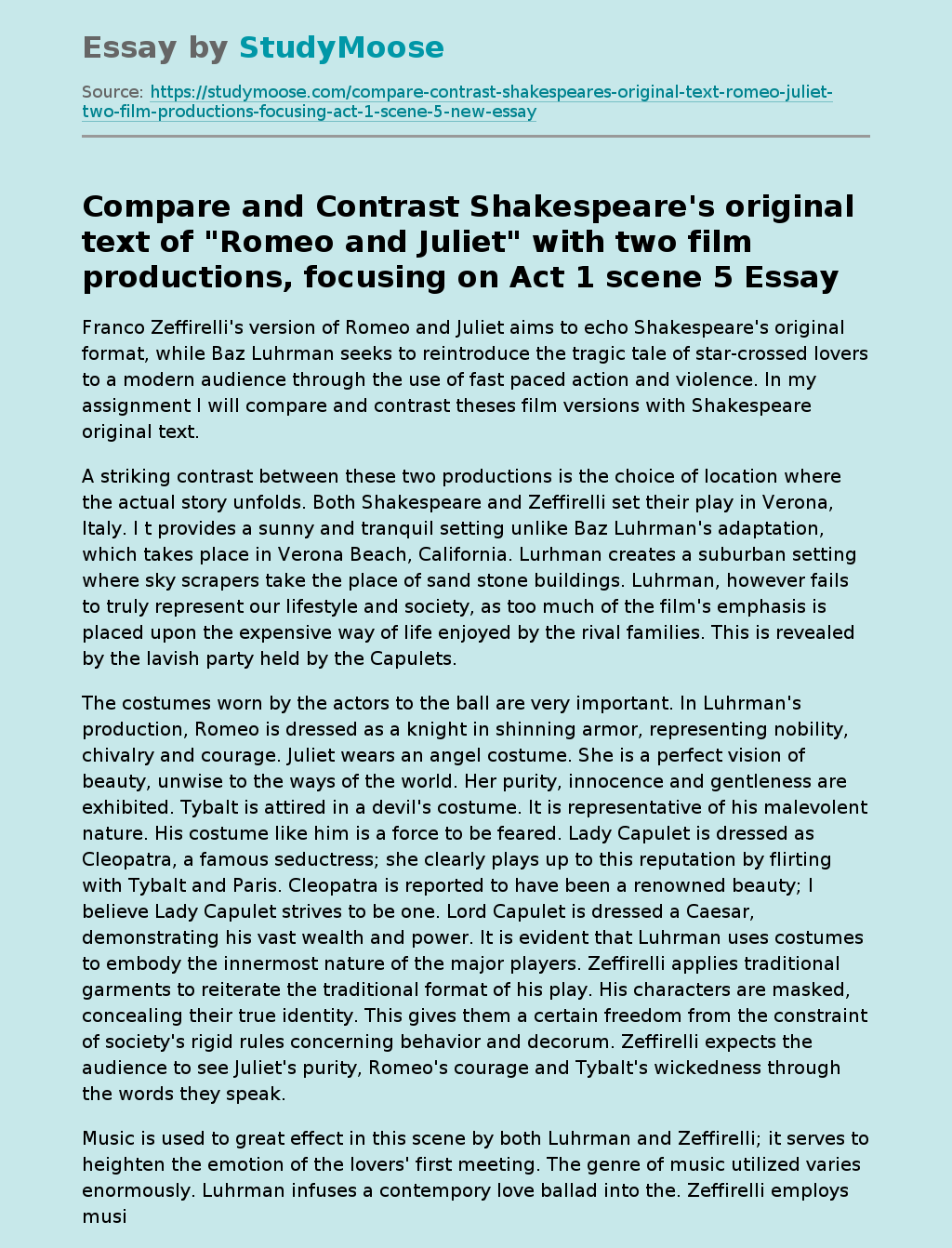