Compare and Contrast the Representation of the Figure of the Slave, and of the Theme of Freedom, in Twain’s “Adventures of Huckleberry Finn”

Compare and contrast the representation of the figure of the slave, and of the theme of freedom, in Douglass’s “Narrative” and Twain’s “Adventures of Huckleberry Finn”. The two novels that I am studying are “The Adventures of Huckleberry Finn” by Mark Twain, and “The Narrative of Frederick Douglass – Written by Himself”. Both these texts give us an insight into the life of slavery and the societal beliefs of the South in America in the nineteenth century. The theme of freedom and the figure of the slave are two common aspects of the book that I shall be looking at.

Don't use plagiarized sources. Get your custom essay on
“ Compare and Contrast the Representation of the Figure of the Slave, and of the Theme of Freedom, in Twain’s “Adventures of Huckleberry Finn” ”
Get custom paper
NEW! smart matching with writer

Frederick Douglass’ text gives us a first person account of life as a slave and in Huck Finn we get an account of a slave’s life through the eyes of a young southern boy. Both leave us with interesting comparisons and contrasts which I will also explore in this essay. Twain and Douglass leave us with much food for thought in these novels and while one may have published for political reasons and the other for entertainment, they are both entertaining and politically challenging.

In the south around the time of these writings slavery is a taboo subject.

There are some comparisons in the figure of the slave in both novels. In Douglass’ narrative he gives us an account of the cruelty slaves were experiencing – “the louder she screamed, the harder he whipped; and where the blood ran fastest, there he whipped longest. ” (chapter 1).

In this text Douglass tries to gain sympathy for the slave and although the text is factual and a true story, he shapes that story so that he can get across the point he desires. We also see how the identity of the slave is taken away, and the slave is seen as less than human – “I have no accurate knowledge of my age, never having seen any authentic record containing it… slaves know as little of their ages as horses know of theirs” (chapter 1). The comparison to animals that Douglass makes is common and it dehumanises the slave and somehow makes the white owners to feel superior to the black laves. In contrast to this, in Huckleberry Finn, we see a humanisation of the slave Jim. On the raft, Huck and Jim form a friendship and this was seen as hugely controversial at the time of publishing. Huck learns to see Jim as a human and although he does fight against the moral code he was brought up to believe, his moral instincts win out as he said “It was fifteen minutes before I could work myself up to go and humble myself to a nigger – but I done it, and I warn’t sorry for it afterwards neither” (Chapter 15).

Huck knows that when he helps Jim he is committing a moral crime but his instinctual moral code wins out. He connects emotionally with Jim, something that other ordinary Southerners wouldn’t normally do due to societal beliefs at the time. However it is often said, and truthfully so in my opinion, that the relationship between Jim and Huck is actually demeaning towards Jim. Jim is seen not as a man, but as a mere boy. The relationship between Jim and Huck is similar to a boy with his child friend, in comparison to a child’s relationship with a grown man.

Douglass also addresses this topic in his narrative when he refers to his masters son saying “He could grow, and become a MAN; I could grow, though I could not become a man, but must remain, all my life, a minor—a mere boy”. The grown up slave is never treated as an adult but he is treated as a less than adult, an uncle or a boy. An issue relating to this is the contrast that I noticed in the figure of the slave in both Douglass and Jim, was the issue of language. Douglass’ speech in the text is one of high standard.

He speaks with the manner of a well educated white man, however in comparison Jim speaks as other would expect him to speak in a thick southern accent and with grammatical incorrect language – “No but I ben rich wunst, and gwyne to be rich again. Wunst I had foteen dollars, but I tuck to specalat’n’, en got busted out” (p43). Twain depicts the slave as the public would normally see the slave. Douglass on the other hand didn’t speak like the public expected him to and he spoke with grace and honour.

Douglass began to turn the tide around and help the public realise that slaves are indeed just as intelligent as the normal public. The theme of freedom is an obvious one in both texts. Frederick and Jim both run away from their owners to gain freedom from the harsh reality of slave life. For Douglass freedom came with literacy. When Douglass began to read and write it opened up his eyes to the life of slavery and just how wrong it was. However he often wondered if this was a gift or a curse “I would at times feel that learning to read had become a curse rather than a blessing” (p24).

He realised the true cruelty of the slave life and when he learned that his ancestors were stolen and brought to another country his anger is not missed – “I loathed them as being the meanest as well as the most wicked of men” (p24). Douglass gained the will and the courage to gain freedom through literacy. He learned of a better life in the north and he learned of a way to get there. In Huckleberry Finn we see Jim want to gain freedom when he hears that he may be sold down south to further cruelty.

But freedom for Jim is also seen on the journey down the river. On the raft is seen another society, a society where white and black get along and even form friendships. There is freedom from racial judgement and discrimination as both are just looking to survive. The ending of Twain’s novel highlights the political age of “second slavery” at the time. It turns out Jim was a free man soon after he escaped as Mrs Watson gave him his freedom in her will – “he’s as free as any cretur that walks this earth! ” (p258).

We get an altogether different impression of Mrs Watson in the end as she changes her opinion on slavery – “she was ashamed she was ever going to sell him down the river, and said so” (p258-59). Many believe, as I do, that this relates to the changing heart of the south after the civil war. It symbolises a change in the ways of slavery. However the fact that Jim was legally free throughout the majority of his journey also highlights the present “second slavery” era in the south. Although the slaves are legally free they still face discrimination and segregation, as Jim did on his journey although officially free.

His freedom was gained technically and not forcefully or by major tactics. In Douglass’ narrative we also see that he gained some standing “you shall see how a slave was made a man” (p39) in the fight against his master. However this unlike Jim was gained by physical force – “He had drawn no blood from me, but I had from him” (p43). So both novels acknowledge the need for change but I think that both realise that it cannot be overcome in legal or in writing alone. Huge reform is needed to gain true freedom for all slaves. Both of these novels express the need for change. Douglass uses his own xperiences to show the cruelty in slavery and encourages abolition. He publishes his book for the explicit purpose to arouse people’s sympathy and to rebel against slavery in the south. Twain’s underlying moral codes in the novel, while some do not see, I believe are for a similar purpose of freedom. The figure of the slave in Twain’s novel is one familiar to the Southerners and to the country as a whole, while Douglass’ narrative defies the stereotype of the slave and he makes a stand against it. Both novels are entertaining with moral standings. A perfect combination.

Compare and Contrast the Representation of the Figure of the Slave, and of the Theme of Freedom, in Twain’s “Adventures of Huckleberry Finn”. (2020, Jun 01). Retrieved from https://studymoose.com/compare-contrast-representation-figure-slave-theme-freedom-twains-adventures-huckleberry-finn-new-essay?post 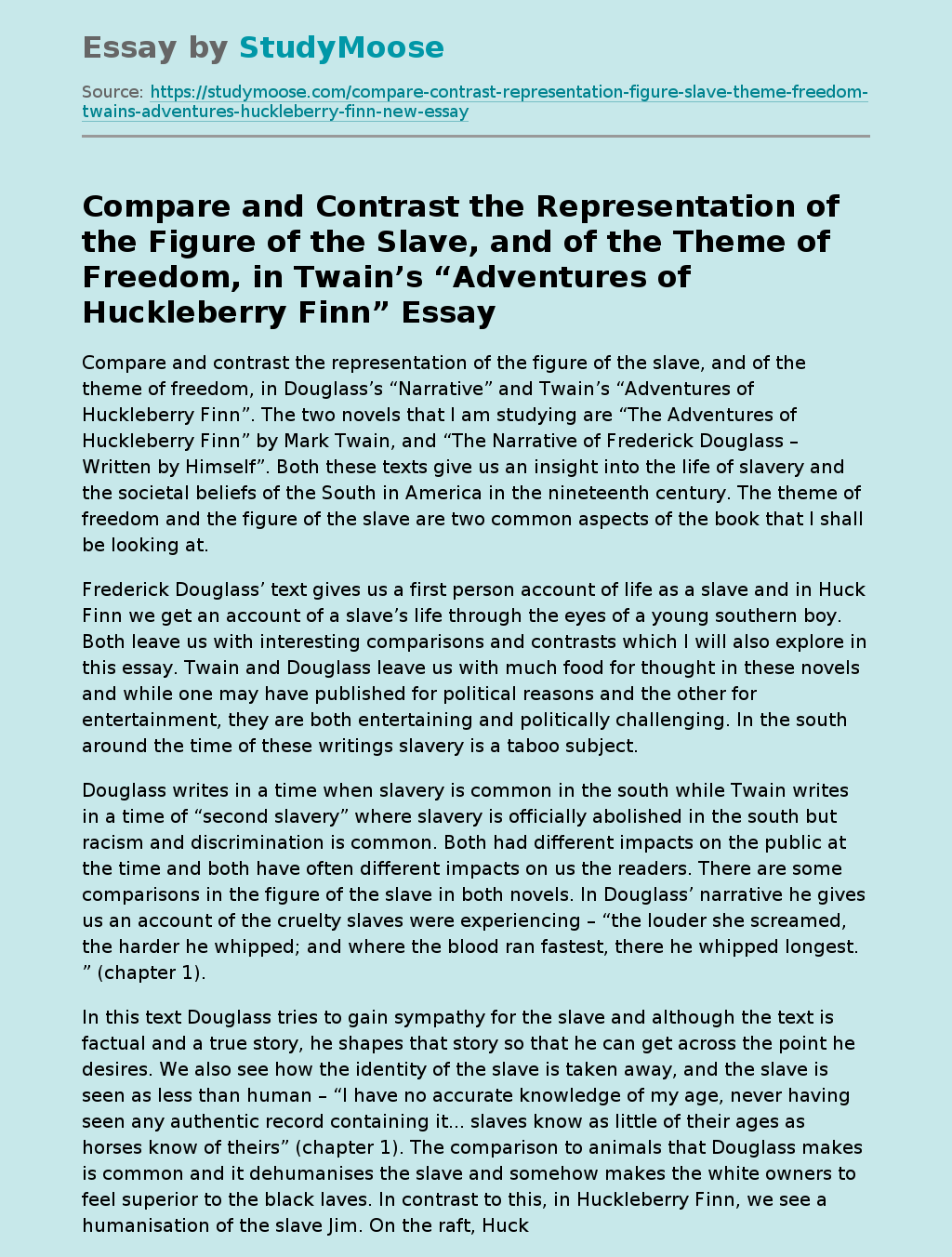