Compare and contrast the poems Strange Meeting, by Wilfred Owen and I Have A Rendezvous With Death, by Alan Seeger

Strange Meeting is a poem by Wilfred Owen. Wilfred Owen was born in 1893 and died in 1918. He wrote Strange Meeting in the winter before his death. Alan Seeger was born in 1888 and died in 1916, and wrote I Have A Rendezvous With Death in . Both poems are about a meeting of some ilk. Strange Meeting is set in Hell, and is about a soldier killed in battle speaking to another soldier that he himself killed. The second soldier responds with kindness and wisdom, which shows how the two of them, though on opposite sides in the war, are really the same.

Don't use plagiarized sources. Get your custom essay on
“ Compare and contrast the poems Strange Meeting, by Wilfred Owen and I Have A Rendezvous With Death, by Alan Seeger ”
Get custom paper
NEW! smart matching with writer

I Have A Rendezvous With Death is not set in any particular location – it relies on the interpretation and imagination of the reader to think up where it could be set. It supposedly set during the war and is presumably about a soldier reflecting and apparently wanting death.

The titles of both the poems have the same meaning in the sense that they are both meeting something.

Strange Meeting represents an odd meeting of some sort, but is a fairly simple title and does not immediately communicate any striking ideas. I Have A Rendezvous With Death symbolises a meeting between a person and death. However, the use of the word “rendezvous” makes a reader think and feel that the voice of the poem thinks of death as a casual affair, something that they do not care about as when a person makes a “rendezvous” with another person, it’s never usually serious or bad.

If Seeger had used a different word instead of “rendezvous”, a different impression would be given. For example, if he had used the term “appointment with death” or “engagement with death”, the reader would get the idea that the occasion of meeting death is more serious or more formal. “Rendezvous” is therefore a casual and odd term to associate with death. It also shows that the voice of the poem is expecting or knowing that they will die soon.

Strange Meeting weakens the idea of war being glorious and great, possibly shown when Owen writes ‘the pity of war’ as ‘the truth untold’. Repetition accentuates this view on war in the line ‘The pity of war, the pity war distilled’. The reader could be drawn to this line as it is one of the only five lines out of the forty four which is eleven syllables, rather then iambic pentameter. Also what could be drawn to the reader’s attention is the word ‘distil’. To distil something is to make it pure; here Owen could be signifying that although some people felt mixed emotions about the war, the ‘pity’ that Owen refers to is something greater than any pity or sympathy, perhaps a soft and pure pity, as he joins ‘pity’ with ‘distil’. If Strange Meeting was supposed to be a glorious poem, expressing the “wonder” of war, Owen would not have used words like ‘pity’ and ‘distil’, but perhaps words more like ‘strong’ and ‘mighty’ – this consequently implies that Owen does not his readers to think war is a wondrous thing. Rendezvous also weakens the idea of war being glorious and great, as the voice of the …

The emotions and feelings of the both of the soldiers are shown through descriptive and emotive language in Strange Meeting. The second soldier explains that there is similarity between them despite their differences and opposite sides on war when he says, “Whatever hope is yours Was my life also; I went hunting wild, after the wildest beauty in the world”. The technique displayed here is emotive language and Owen is using it to show thWhatever hope is yours Was my life also” is a particular example of the soldier conveying their similarities using emotive language, as he is saying that all the hopes the other soldier had during his life he also had. Owen is trying to get across the message that war separates and disconnects people who are actually similar, and this is another example of Owen weakening the idea of war being glorious and great. “I went hunting wild After the wildest beauty in the world” suggests that the soldier feels that when he went off to war he felt that he was doing the right thing and that he was searching and trying to find the “wildest beauty”, which he believes is war and subsequently doing whatever it takes to do it. On the other hand, I Have A Rendezvous With DeathWe can see this further more as he finds the death more exciting than a sexual romance We can see this through this line in the poem “Pulse nigh to pulse, and breath to breath, where hushed awakenings are dear…But I’ve a rendezvous with Death.” what creates the tension for him and death even more is when he talks about this sexual fantasy but he stops it all by saying ‘But I have a rendezvous with Death’. He always interrupts any idea of something else through the idea of death for example “And apple blossoms fill the air-I have a rendezvous with death”

In Strange Meeting there is constant and continuous partial rhyming throughout the poem, for example:

“It seemed that out of battle I escaped, Down some profound dull tunnel, long since scooped, Through granites which titanic wars had groined, Yet also there encumbered sleepers groaned.” It is also divided into three stanzas, the longest being the third one, where the second soldier gives a monologue about life and war. The fact that the third stanza is by far the longest is probably Owen’s way of focusing all the reader’s attention on the words and meaning of the last stanza. Rendezvous also uses the pararhyme but it is more obvious. Seeger tries to draw attention to the idea of his “rendezvous with Death” by repeating the same phrase over and over again between his rhymes, such as: “At some disputed barricade, When spring comes back with rustling shade And apple blossoms fill the air, I have a rendezvous with death, When Spring brings back blue days and fair.”

Evidently nothing else is more important to him than his rendezvous with death, and that is why his para rhyming is divided and organized around the one main phrase in the poem “I have a rendezvous with death”. The poem begins with this phrase, and it then springs up frequently throughout the poem, separating some of the rhyming. Seeger is obviously trying to focus all the reader’s attention on his rendezvous with death, therefore his repetition of that phrase is effective. It is interesting that both poets have used the structure of the poems to attract the reader’s attention to the points they feel are important in the poem.

Compare and contrast the poems Strange Meeting, by Wilfred Owen and I Have A Rendezvous With Death, by Alan Seeger. (2020, Jun 01). Retrieved from https://studymoose.com/compare-contrast-poems-strange-meeting-wilfred-owen-rendezvous-death-alan-seeger-new-essay 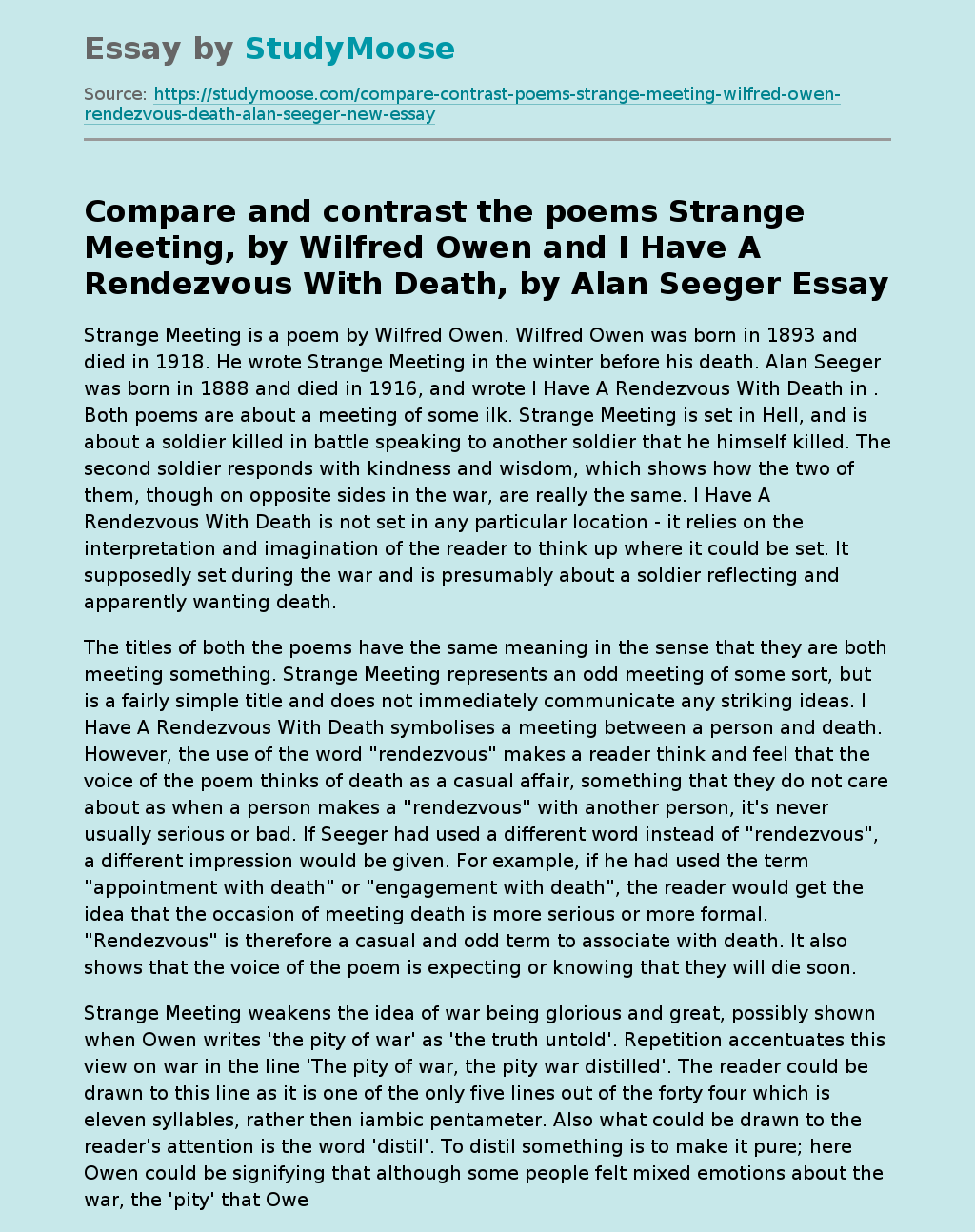