Like any two people in the world Franklin D. Roosevelt and Ronald Reagan both have their own views about war, women’s rights, gay rights, foreign policy, and many other problems facing our country. These two presidents have greatly impacted our country since they were in office. Roosevelt and Reagan have helped shape our country into what it is today. Franklin D. Roosevelt was born in 1882 in New York. He went to Harvard University and Columbia Law School. He was elected New York senate in 1910.

In 1921 he was diagnosed with poliomyelitis. In 1928 Roosevelt became the Governor of New York. He was elected the 32nd president of the United States in November 1932. There were thirteen million unemployed by March and nearly every bank was closed. Roosevelt made it his main goal to restore businesses and agriculture. Three years later our nation had achieved somewhat recovery. Businessmen and bankers still blamed the horrific economy on the current president. His idea was called the Roosevelt’s New Deal program.

Not too many people were thrilled about this program to say the least. He took the nation off the gold standard and allowed deficits in the budget. After this program failed, Roosevelt made a new program or Hanson 2 reform known as Social Security.

This put heavier taxes on the wealthy, new controls over the banks, and a huge relief program for the economy. While Roosevelt was president he also added the United States to the “good neighbor” policy. Its main principle was that of non-intervention and non-interference in the domestic affairs of Latin America.

Another goal was to keep the United States out of war in Europe. A huge event all of us know was the Japanese attack on Pearl Harbor on December 7, 1941. This officially got us involved in World War II. Although Roosevelt didn’t like confliction he announced a global war. Ronald Reagan was born on February 6, 1911 in Illinois. He attended Eureka College and studied economics and sociology. As Reagan grew older his political views went from liberal to conservative. In 1966 he was elected governor of California then re-elected in 1970. In 1980 Reagan won the Republican Presidential nomination then took office on January 20, 1981. He won the presidential race easily due to the inflation and secret of Americans in Iran. Only sixty-nine days later after he took office he was shot. While Reagan was in office the economy grew, inflation lessened, employment increased, and national defense was strengthened.

He helped the economy by cutting taxes and government expenses. In 1984, Reagan won a second term due to his brilliance in his first. At the end of his presidency the nation had the longest period of peacetime prosperity without recession or depression. Both Roosevelt and Reagan dealt with major events involving foreign affairs. During Reagans two terms he increased defense spending 35 percent, but sought to improve relations with the Soviet Union. He attended meetings with Soviet leader Hanson 3 Mikhail Gorbachev and negotiated a treaty that would eliminate intermediate-range nuclear missiles. Reagan also declared war against international terrorism, sending American bombers against Libya after evidence came out that Libya was involved in an attack on American soldiers in a West Berlin nightclub. While Roosevelt was president he wanted to increase the influence and prestige of the United States on the world and make the country a global power. One of Roosevelt’s famous quotes was “speak softly and carry a big stick”. He was willing to use force when needed but also using persuasion instead of violence.

One of the biggest foreign policies involved in his presidency was that of the Panama Canal. Roosevelt was aggressive with foreign policy and so was Reagan. During Reagans presidency the economy was in pretty good shape. The economy grew, inflation lessened, employment increased, and national defense was strengthened. He helped the economy by cutting taxes and government expenses as well. Roosevelt on the other hand wasn’t as lucky with the economy as Reagan. Roosevelt took presidency during the great depression. He had to make huge efforts and changes to try to get the economy back on track. Over the next eight years, the government instituted a series of experimental projects and programs, known collectively as the New Deal. This was aimed to restore some measure of dignity and prosperity to many Americans. Both Franklin D. Roosevelt and Ronald Reagan had very eventful office terms.

They also had their differences. While Roosevelt was president the 22nd Amendment wasn’t made so the presidential term was longer than it is today. Both presidents had to deal with wars, foreign affairs, tax cuts, and reduction on government Hanson 4 spending. Also, before Reagan and Roosevelt were elected president they were Governors of states as well. Ronald Reagan and Franklin D. Roosevelt played major roles in making our country into what it is today. Without these two presidents I don’t know where our country would be. Both helped our economy tremendously, strengthen our foreign affairs, and made America a global leader. Granted they had different views on some things; they still were two great presidents. 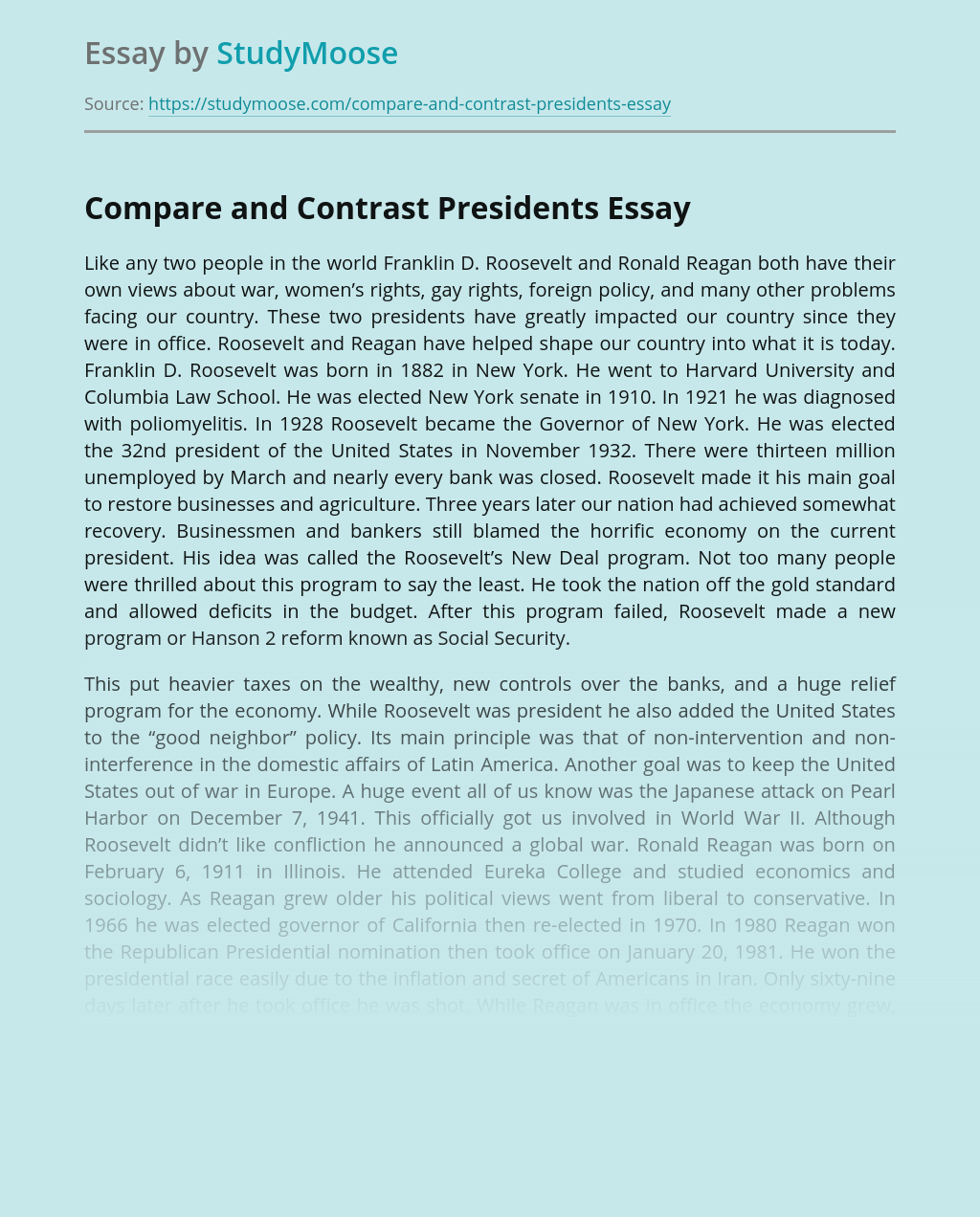 Don’t waste time
Get a verified expert to help you with Compare and Contrast Presidents
Hire verified expert
$35.80 for a 2-page paper
Stay Safe, Stay Original