Comparaison Between MCMXIV and Anthem for Doomed Youth

In both of these poems Anthem For Doomed Youth and MCMXIV talking about war, Wilfred Owen and Philip Larkin try in different ways to engrave in their readers minds the atrocious actions that war provoked with different language, voice but also form.

Don't use plagiarized sources. Get your custom essay on
“ Comparaison Between MCMXIV and Anthem for Doomed Youth ”
Get custom paper
NEW! smart matching with writer

We can assume that Wilfred Owen surely wanted to contrast these two opposite subjects to create an ironic atmosphere. We can already guess the poem is going to be powerful and memorable. On the other hand, the second poem, MCMXIV,is composed of 4 stanzas containing each 8 lines but which don’t have a rhythmic pitch. For me, it looks like Philip Larkin is narrating a tale or a story. In my opinion, the sonnet gives a rhythm to the poem and catches more the reader’s attention even if it seems shorter than Larkin’s poem.

Secondly, we know both of these poems are talking about the First Wold War. But if we look a little bit closer, we can clearly feel a difference in the choice of words and language. After reading the first poem, we feel a mix of disgust, revulsion and unfairness whereas after reading Philip Larkin’s one, melancholia, emptiness and sadness invade us. How can two poems with the same subject can lead to such different feelings?

The sonnet looks like it is divided in two parts, both of the ‘stanzas’ start with a question: “What passing-bells for these who die as cattle?”, “What candles may be held to speed them all?” Then, the following lines answer to the questions.

For me, it seems it’s like a speech with two rhetorical questions. The poet asks the questions but already has the answers and responds to it very precisely in a very negative way: ‘no’, ‘nor’, ‘not’ are used at the beginning of a line following the question.

Anthem For Doomed Youth is a small but efficient poem. Any word is present for a particular reason. The vocabulary used is snappy and harsh one such as “monstrous anger” “nor any voice of mourning” “who die as cattle”. It sounds like Wilfred Owen wants to shock us. He plunges us in the horror of the war: we can almost sound the “stuttering rifles”, see “the holy glimmers of goodbyes”. He definitely wants to express his disgust toward war. Indeed, we are not facing a ‘peaceful’ war as the whole population expected in 1914, these young boys do not bravely die for their nation: it’s a horrific battle which ravage both sides but both stubbornly do not make any move to stop this carnage.

Owen makes us feel the constant fear, the incomprehension of this pointless ravage Withal, the second poem has a more smooth way of approach. Philip Larkin wants to have an affective impact. He doesn’t use striking a vocabulary like Wilfred Owen but a melancholic one. There is this feeling of confinement and reclusion; “shut shops”, “sunblinds”, “shadowing Doomsday lines”. Whereas we could almost hear the ‘stuttering rifles’ in Anthem For Dommed Youth, here, in MCMXIV, silence is the only tolerable sound. No one should make noise, in honour of all the dead soldiers who fought naively for a cause that wasn’t even directly linked to their nation.

Wilfred Owen expresses the horror of the trench warfare whereas Philip Larkin enters in the impact on social consequences that War leaded to. Life will never be the same again after this tragedy. Not only will the soldiers be shell-shocked, but the whole population will be too. Even though women and children were not on the battlefront, they still experienced the war at home fronts.

Owen also uses repetitions to emphasize some specific phrases. The second and third lines both start with the word ‘only’ and are followed by personifications of weapons like ‘the monstrous anger of the guns’ and ‘stuttering riffles’ rapid rattle’; it is almost like the poet cannot even distinguish the human beings and machines. The men do not kill each others anymore, the machines do. The repetition of the ‘no’, ‘nor’, ‘not’ is also a strong sign: there isn’t any hope in anything, we cannot see positive anymore. There is a constant anxiety in the soldiers’ eyes. The word ‘choirs’ is also written two times. The reference in music could be positive but here, it is not.

It is a music which leads to an inevitable death. It could also refer to the heartbeat of soldiers. A worrying rhythm that could stop anytime. There is also a repetition in MCMXIV in the last stanza: “never” (thee times). But once again, we cannot feel anger; only a strong sorrow. Humans can never be innocent again after the terrible massacre of this War. Larkin accepts with resignation what happened: what is done is done. The dead people will not come back. The only thing we can do is remember them and commemorate them. On the contrary, Owen cannot tolerate this thought and he feels obliged to relate the catastrophic event harshly to prevent people to never do that again. The human loss is literally and psychologically intolerable.

Finally, we can discuss about the poet’s choice of title of their poems. An anthem is a choral composition having a sacred or moralizing text. So, this poem is aimed to all the heroes who died fighting. Nevertheless, the adjective ‘doomed’ comes to spoil the word anthem. Doomed is just ‘fate’, something inevitable. It is true we cannot win over death but at least, we can delay it as much as we can, whereas the following word ‘youth’ has a tragic connotation. Young people are not supposed to die, their fate is to enjoy life as much as they can but this war comes to destroy all their dreams and hopes. MCMXIV is the number 1914 in ancient roman. We can assume it is a reference to the past, Roman letters still exist after hundreds of years, maybe Larkin wants his poem to be remembered as much as these numbers?

To conclude, we can say that even if Wilfred Owen and Philip Larkin did have different ways of approach to talk about war, they both caused very strong feelings. One used an aggressive and impulsive pen whereas the other provoked sadness and respect toward the fallen soldiers. In fact, they definitely agree in one similar point: First World War was a tragedy that no one should ever forget.

Comparaison Between MCMXIV and Anthem for Doomed Youth. (2016, Dec 07). Retrieved from https://studymoose.com/comparaison-between-mcmxiv-and-anthem-for-doomed-youth-essay 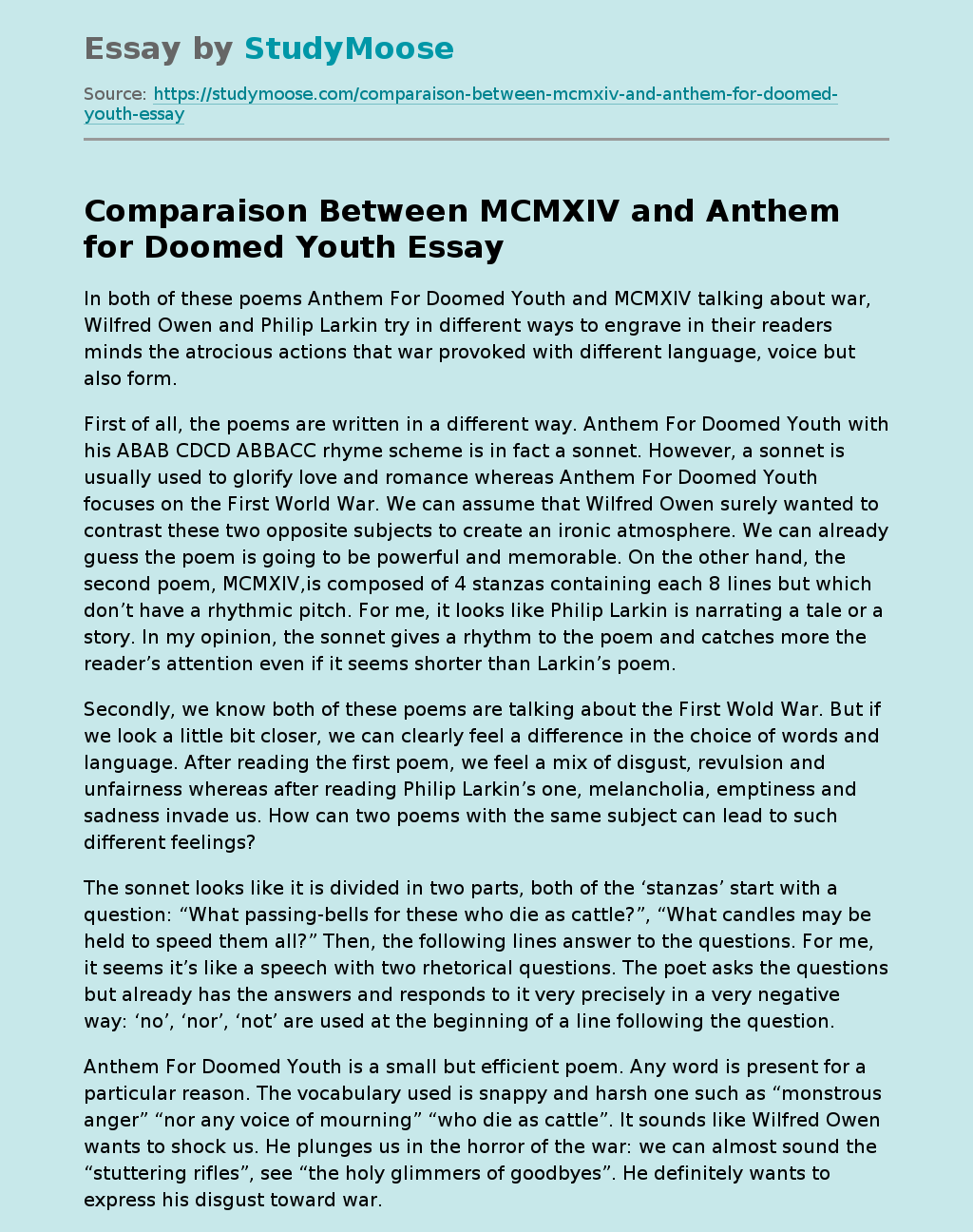