Benjamin Franklin once said, “If you would not be forgotten, as soon as you are dead and rotten, either write things worth reading, or do things worth the writing”. He was a man certainly worthy of praise as he did both. He lived those words by writing and doing as much as he could. He wrote volumes and volumes of papers, almanacs, journals, and even an autobiography that proved to be very popular. Benjamin Franklin was one of our Founding Fathers.

Don't use plagiarized sources. Get your custom essay on
“ Commemorative Speech Presentation ”
Get custom paper
NEW! smart matching with writer

He was a scientist. He was an inventor. He was a statesman. He was a printer. He was a philosopher. He was an economist, and he was much more. Today I would like to honor this great man’s contributions to our modern society. Benjamin Franklin was an individualist that defended the rights of the person. However, he always related to the needs of the society. Few people have had such an interest for his or her community as Benjamin Franklin.

He was always aware of the “greater good”. This is evident by his many contributions to society at the time. He founded the Library Company in 1731, Union Fire Company in 1736, the Pennsylvania Hospital in 1751, etc.

His contributions to society (“greater good”) weren’t only materialistic. He first wrote Poor Richard’s Almanack on December 28, 1732. Besides containing a calendar, weather information, poems, and astrological information, it also included Franklin’s proverbs. His proverbs were intended to foster thriftiness and courtesy. Some of the sayings were, “Without justice, courage is weak”, “Sloth and Silence are a fool’s virtues”, “Let thy vices die before thee”.

Franklin hoped that people would take his words to heart and change for the better. Benjamin Franklin was also a “man of science”. Mr. Artibee, my neighbor who is a historian, said that, “Benjamin Franklin was a sponge. He absorbed everything which led him to a lifelong journey of trying to understand nature through logic”. Some of the useful inventions of Franklin include a smokeless fireplace, bifocal glasses, and the lightning rod. His “intellectual curiosity was fueled by the thrill of discovery” (Isaacson 130).

His contributions helped society tremendously, because he made his work available to for the public to use. Selfless people like Benjamin Franklin are rare in today’s society. Furthermore, Benjamin Franklin, as everyone knows, was one of our Founding Fathers. In fact, he was the only person that signed the Declaration of Independence, the Constitution, the Treaty of Alliance with Paris, and the Treaty of Peace with Great Britain. However, he was much more than that. He not only helped establish a new nation but he also defined American character.

He was like a moral role model for people at the time. His intellectual curiosity, moral character, political beliefs, and his general perspective on life helped him gain admirers all over the world. In conclusion, Benjamin Franklin was truly an amazing person. His contributions to society are innumerable, and his presence is even felt today via scientific contributions and political contributions. PBS described Benjamin Franklin as “one of the most extraordinary human beings the world has ever known”. I would have to agree with that assessment simply based on Franklin’s character. 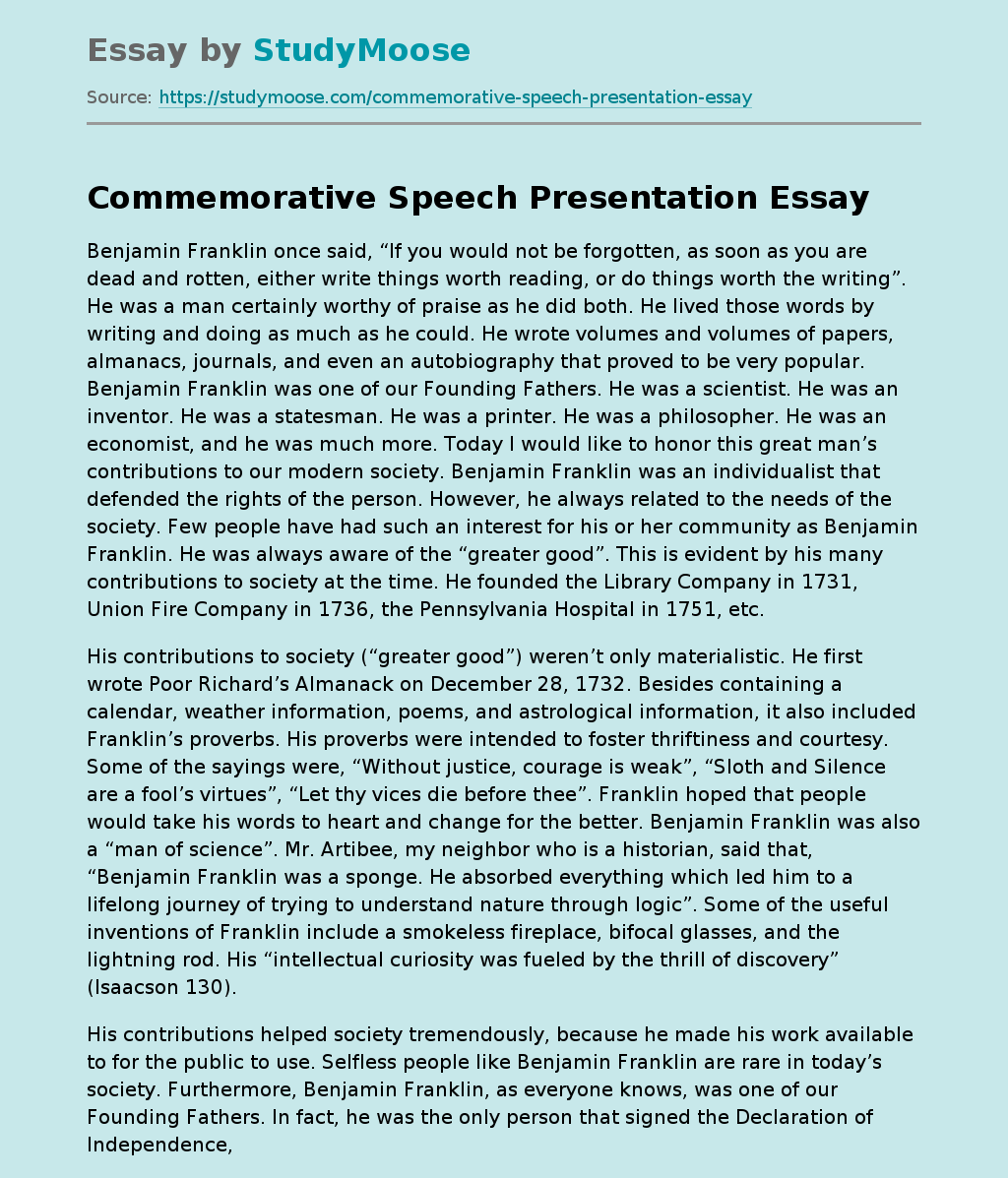