Robert Frost was a successful poet for many reasons. He was well known for the diction used in all his poems. Along with diction, he was widely known for the complexity of his poems. Imagery also was key in many of Frost poems because of the way he described events, people and places. He appealed to many Americans because of the life lessons told in many of his poetry. In all, Frost was one of the most popular poets in America’s history.

Don't use plagiarized sources. Get your custom essay on
“ A Comparison of Robert Frost’s Fire and Ice and the Mending Wall ”
Get custom paper
NEW! smart matching with writer

The diction in Frost’s poems stood out to many of his readers because of the elementary language he used, which made his poems easy to understand. To make his poetry easy to understand, he ventured away from difficult words. The elementary diction was shown in “Fire and Ice” and “The Mending Wall”. “Fire and Ice” is an example where the diction draws attention to a certain concept or idea for the reader to understand. When Frost uses the antonym words “fire” and “ice”, he is making a point to the reader that the words are representation of love and hate.

In “The Mending Wall”, there are examples of elementary diction that noticeably portrays Frost intentional word choices. Frost says that, “there where it is we do not need the wall”(Frost 23).

Another focal point is Frost’s poetry was complexity. The messages of his poems are interesting because he does not usually talk about the main idea directly but by using figurative language to get his ideas across.

Frost was also commonly known for writing different types of poems like his most humorous one, “Home Burial”. One of Frost’s most complex poems is “The Road Not Taken”. In “The Road Not Taken”, Frost uses complex metaphors to describe the story within the poem. “Two roads diverge in a wood, and I took the one less traveled by” (Frost 19). When Frost uses a metaphor about the “two roads that diverge”, he is referring to the two paths in life that there are to take.

Imagery in Frost poems was extremely vivid to describe events, people and places. Frost often related nature imagery with romantic views. In “Desert Places”, Frost uses snow to describe an image of loneliness. For example, the word “snow” is described as expressionless, “A blanker whiteness of benighted snow/ with no expression, nothing to express”(Frost 12). “Birches” is a typical example of the use of nature imagery that Frost uses to talk about the dislikes of the pressures of social life. While Frost does not specify exactly which burden he is targeting, the reader can easily piece together enough evidence from various parts of the poem to depict Frost’s meaning. When Frost compares ice to crystal shells, he uses descriptive words to enhance the image to the reader. The words “shattering and avalanching” (Frost 11) are used to enhance a visual image for the reader.

Robert Frost was most famous for the way that he structured and managed his career. Frost became most popular because of the stories told within his poetry. In Frost poetry, he avoided any explicit language. He also did not discuss the economy or anything dealing with politics. Many other Americans became aware of who Frost because he was the first American poet to read poetry at John F. Kennedy’s inauguration. He read “The Gift Outright”, which was a poem that was written especially for the inauguration.

In all, Frost was known for the elementary diction that he used in all of his poetry. Along with diction, he was widely known for the complexity of his poems. His use of imagery was descriptive in a way that it painted a picture for his readers. The life lessons that were depicted in his poems were one of many reasons why Americans favored him. Altogether, Frost was one of the most popular poets in America’s history.

A Comparison of Robert Frost's Fire and Ice and the Mending Wall. (2019, Aug 19). Retrieved from https://studymoose.com/a-comparison-of-robert-frosts-fire-and-ice-and-the-mending-wall-essay 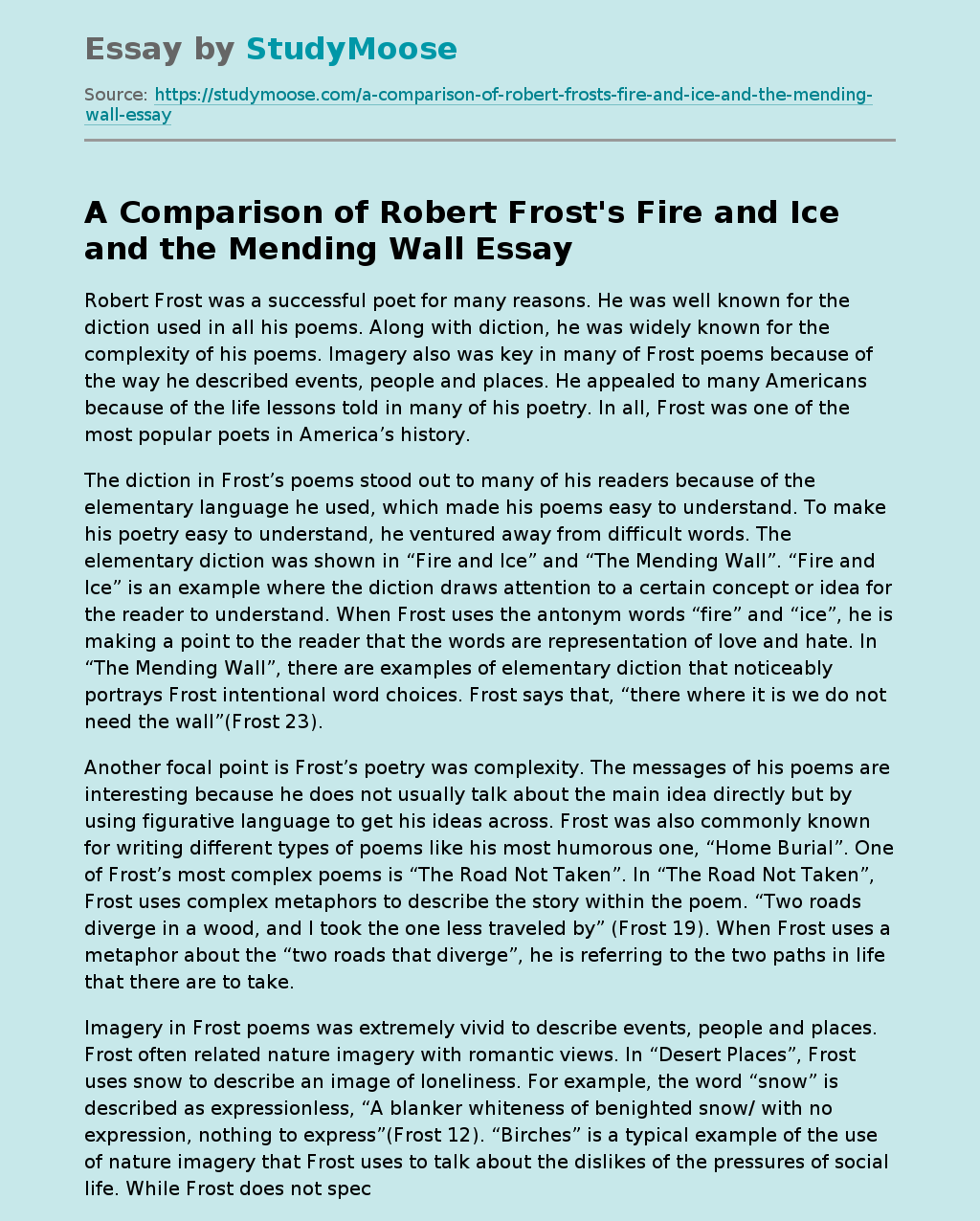