From a stepping stone to a Milestone Popularly known as Mamoni Raisom Goswami, Indira Goswami was an Assamese poet, editor, writer, professor and scholar who was also known as Mamoni Baideo. She was the pole star of Assamese Literature. The only second Assamese recipient of the “Jnanpith Award”, Mamoni Baideo was born on 14 November 1942 in Guwahati. Mamoni Raisom Goswami was born to Umakanta Goswami and Ambika Devi, who were very much attached to Sattra life of the Ekasarana Dharma. She was married to Madhevan Raisom Ayengar who died in a car accident after 18 months of their marriage.

Get a verified writer to help you with Mamoni Raisom Goswami

She studied at Latashil Primary School, Guwahati; Pine Mount School, Shillong; and Tarini Charan Girls’ School, Guwahati and completed Intermediate Arts from Handique Girls’ College, Guwahati. She majored in Assamese literature at Cotton College in Guwahati and secured a Master’s degree from Gauhati University in the same field of study. Mamoni Raisom Goswami suffered from depression since her childhood. Even in the opening pages of her autobiography, “The unfinished Autobiography”, there is a mention of her inclination to jump into the Crinoline Falls located near their house in Shillong.

Repeated suicide attempts marred her youth. After sudden death of her husband, she started taking heavy dose of sleeping tablets. After she was brought back to Assam, she joined the Sainik School, Goalpara. After working at the Sainik School in Goalpara, Assam, she was persuaded by her teacher Upendra Chandra Lekharu to come to Vrindavan, Uttar Pradesh, and pursue research for peace of mind.

Her expressions as a widow as well as an researcher finds life in her novel, “Nilakantha Braja” (The Blue necked braja). This novel is all about the radhaswamis of Vrindavan who lived in utter poverty and sexual exploitation in everyday life.

One of the main issues which the novel revolves around is the lives of the widows for whom companionship beyond the walls of the ashram becomes impossible. The novel exposed the uglier face of Vrindavan- the city of Lord Krishna. Although the novel invited criticism of Mamoni Baideo from the conservative sections of the society, it still remains a classic in modern Indian Literature. This is the first novel to be written on this subject. The novel was based on Baideo’s research on the place as well as real-life experience of living in the place for several years.

In Vrindavan, she mostly involved herself in studying the Ramayana. A massive volume of Tulsidas’s Ramayana bought there at just eleven rupees was a great source of inspiration in her research. After relocating to Delhi, India, to become Head of Assamese Department at the University of Delhi, the most glorious phases of her life begins. While at the university, she wrote most of her greatest works. Several short stories, including Hridoy, Nangoth Sohor, Borofor Rani, used Delhi as the background. Her two classics — Pages Stained With Blood and The Moth Eaten Howdah of a Tusker— were also written during this period.

The other books completed while she lived in Delhi were Ahiron,The Rusted Sword, Uday Bhanu, Dasharathi’s Steps and The Man from Chinnamasta. At the peak of her literary career she wrote the controversial novel The Man from Chinnamasta, a critique of the thousand-years-old tradition of animal sacrifice in the famous Hindu Shakti temple to Kamakhya, a mother goddess, in Assam. Goswami reported that there was even threat to her life after writing the novel. In this novel she quotes scriptures to authenticate the argument she puts forward in the novel — to worship the Mother Goddess with flowers rather than blood.

She said in an interview, “When the novel was serialized in a popular magazine, I was threatened with dire consequences. Shortly after this, a local newspaper, Sadin, carried an appeal about animal sacrifice, which resulted in quite an uproar—the editor was gheraoed and a tantrik warned me. But when the appeal was published, the response was overwhelmingly in favour of banning animal sacrifice. I also had to contend with rejection from a publisher who was initially keen and had promised me a huge advance, but who later backtracked, offering instead to publish any other book of mine.

But the rest, as they say, is history and Chinnamastar Manuhto went on to become a runaway bestseller! ” Mamoni Baideo was the winner of the Sahitya Akademi Award (1983), the Jnanpith Award (2001) and Principal Prince Claus Laureate (2008). A celebrated writer of contemporary Indian literature, many of her works have been translated into English from her native Assamese which include The Moth Eaten Howdah of the Tusker, Pages Stained With Blood and The Man from Chinnamasta.

She was also well known for her attempts to structure social change, both through her writings and through her role as mediator between the armed militant group United Liberation Front of Asom and the Government of India. Her involvement led to the formation of the People’s Consultative Group, a peace committee. She referred to herself as an “observer” of the peace process rather than as a mediator or initiator. Her work has been performed on stage and in film. The film Adajya is based on her novel won international awards.

Words from the Mist is a film made on her life directed by Jahnu Barua. Very dear to the hearts of every Indian, baideo’s death on 29 November 2011 has created a vacuum in the Indian Literature. She died in the Gauhati Medical College and Hopital (GMCH) due to multiple organ failure after spending many days in the intensive care unit (ICU). No one in the world would be able to replace her in the hearts of each and every Assamese person. Mamoni Baideo will always remain in our hearts forever just like the everlasting footprint on wet cement.

Get a verified writer to help you with Mamoni Raisom Goswami 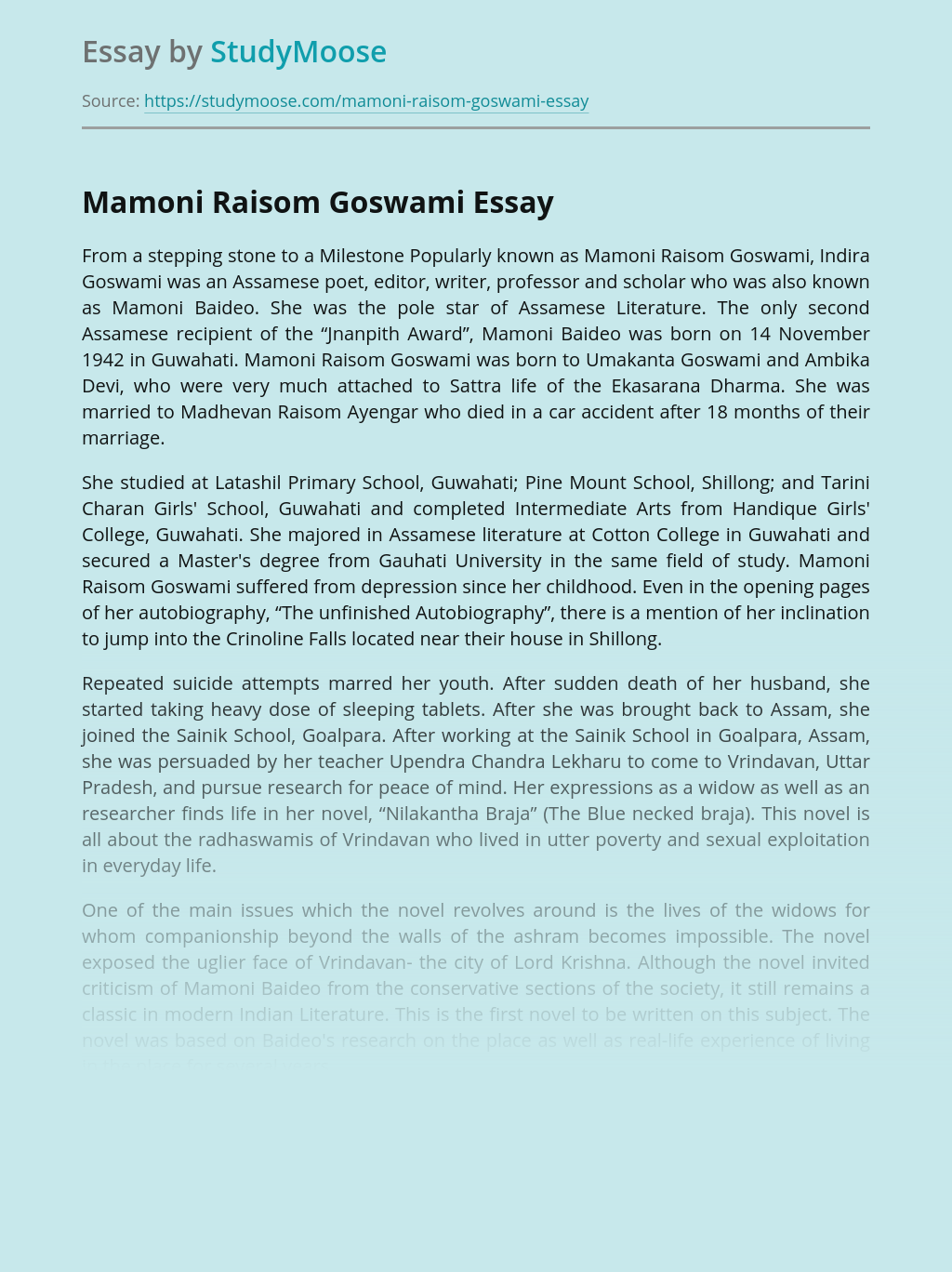